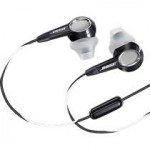 The Bose Mobile in-ear Headset marriesBose’s reputable in-ear Headphones with a tailored-designed audio cable, featuring an inline omnidirectional microphone for phone calls. Music belts out like a symphony in your ears, and switching between music and calls is elementary. You can use the Bose mobile in-ear headset with many compatible phones, including the latest music phones like that thing they call the iPhone….maybe you’ve heard of it. Bose technologies nets a microcosm of superior sound always making me wonder how those Bose magicians pull it off. The full-bodied, well-balanced audio that these Lilipution buds brings out details subtleties you may not have noticed before. I’ve been a big fan of Bose for many years. I’m happy to see that the company is moving into products that accesorize mobile products, a technology category that continues to exponentially grow. (www.bose.com, $129)