Nintendo announces the Wii Vitality Sensor, a device that connects to the Wii Remote and is then worn on the finger. It can sense the wearer’s pulse as well as a number of other body signals transmitted by the wearer’s body. Similar to the way the Balance Board has been used to measure a player’s weight, balance, and posture, the Wii Vitality Sensor is said to draw conclusions about what is happening inside the body of the person wearing it. 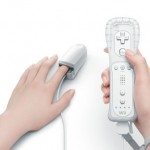 How this will play into a new video game or interactive experience, Nintendo has yet to reveal. At this time there are no titles announced that will work with the sensor.
The company’s top-selling title last year was Wii Fit and to answer the demands of fans craving for more exercises and options, the company will release a follow-up called Wii Fit Plus. Introducing six new yoga and strength training exercises, the expanded Wii Fit will include options for users to create their own customized workouts to match 20 minute, 30 minute, or 40 minute programs, There will be a new emphasis on calories burned and a better system for mixing up exercises from different categories. Perhaps the biggest change is the addition of new balance games including skateboarding, rhythm kung-fu, juggling, balance ball puzzles, and the chance to run an obstacle course while riding a Segway. (wii.com, MSRP $?)