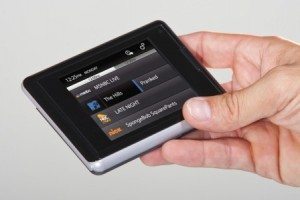 Previously available through AT&T or Verizon Wireless as a cell phone add-on, Chipmaker Qualcomm’s mobile broadcast television subsidiary FLO TV has officially launched its PTV 350 personal television. This is the smartphone-sized device that Qualcomm and hardware maker HTC unveiled in October. Like many of HTC’s smartphones, the FLO TV PTV 350 includes a 3.5″ capacitive touchscreen, built-in stereo speakers, and a battery which can support 5 hours of continuous mobile broadcast viewing.

The FLO TV Personal Television is available today for $249 through Amazon.com and Best Buy.com, and includes six months of free service to entice customers into checking it out. Of course, in order to receive that free half-year, users must sign a contract which incurs a monthly charge between $8.99 and $15.00.  (www.flotv.com)