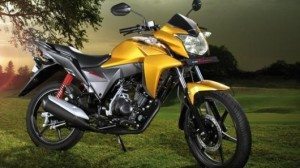 Honda Motorcycles this week introduced one of the most important motorcycle launches of the year happened, the Indian unveiling of Honda’s new fuel-efficient and low maintenance 110cc motorcycle model, the CB Twister.

Honda sells a million motorcycles a year in India, and next year expects to sell 220,000 Twisters, based on its similar looks to the company’s CBR1000RR flagship motorcycle. The Twister’s low maintenance, ridiculous fuel economy (164 U.S. mpg and 197 U.K. mpg) and a price of just US$900, will make this new introduction a killer in the market.

Targeting the younger generation, the CB Twister features a design from the school of large-capacity European motorcycles. The CB Twister is equipped with a low-friction, high mileage, highly efficient air-cooled 4-stroke single-cylinder 110cc engine, which complies with India’s emissions standard (BS-III) that will take effect in April 2010.

India is the world’s second largest motorcycle market (behind China) with sales this year expected to top 8.6 million units, of which the 110cc category accounts for half.

The bike is the product of Honda Motorcycle & Scooter India Pvt. Ltd. (HMSI), a wholly-owned Honda subsidiary in India, and not from Hero Honda, Honda’s local JV company, which owns the lion’s share of the Indian motorcycle marketplace.

The Twister is scheduled to go on sale in India at the end of February 2010 and will be seen for the first time in public at the Auto Expo 2010 to be held in New Delhi, India beginning January 5, 2010. (www.honda2wheelersindia.com/)

The JLab Talk USB Microphone is a plug-and-play high-performance desktop microphone designed for audio flawless recordings and podcasts, even while you're on-the-go, featuring 3 studio-quality Condensers and a studio-quality resolution of 96kHz/24BIT with 4 different Directional Pattern Modes. Overall, this high-performance desktop microphone can deliver you a great dynamic sound range for everyday use, making it perfect for use at home, in the office, or even outdoors. With it, you can ensure that all of your audio recordings come out with all the sound details accurately captured to ultimately have them sounding crystal-clear as an end result. All and all, this is a fairly capable USB microphone, and no matter what type of activity you need it for, you can be sure that this mic does not disappoint!
Read more
Entertainment

The Tenzi Game Line brings you a wide range of tabletop games that are super fun to play, and perfect for the whole family, including dice games, block-building games, card-matching games, and many, many more!
Read more
Outdoor

The Tactica M.020 Camping Tool Card is a compact and ultra-lightweight multi-use tool for camping that offers you a ton of campsite-oriented functionalities that come all packed into a small and wallet-friendly design. Overall, this multi-purpose camping tool is great to have around the campsite at all times, as it is designed to help you with pretty much every task around your campsite, and ultimately, it can turn the hassle of setting up camp and breaking down the campsite whenever you're supposed to leave into really easy tasks.
Read more
Entertainment