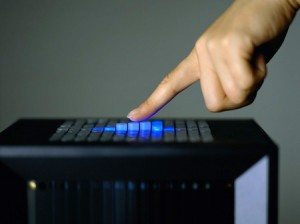 We were already thinking about 3D displays, what with the Blu-ray Association’s new 3D HD specification, but Ivan Poupryev’s Lumen prototype takes things one tactile step further.  His concept involves an array of physically moving pixels, each of which can independently light up and extend out from the screen.  As well as moving, undulating shapes, there’s also a sensor layer on top which allows the pixels to respond to finger touch.

That means 3D controls – for instance buttons standing proud from the surface – can be pressed, and respond to that pressure.  Multiple Lumen units can be networked together and the user-input on one displayed on the others, or a user can merely rest their hand on the surface and feel what’s being displayed.

Each pixel is in fact illuminated from the very bottom of the box, with the top surface in fact being the protruding end of a plastic light-guide tube.  Those tubes are actuated by thin shape-memory alloy (SMA) wires, which heat up and flex when electricity is applied, pushing the light-guide tubes up.  It’s a relatively inexpensive system, which could pave the way for simple 3D displays being commonly used in public environments.