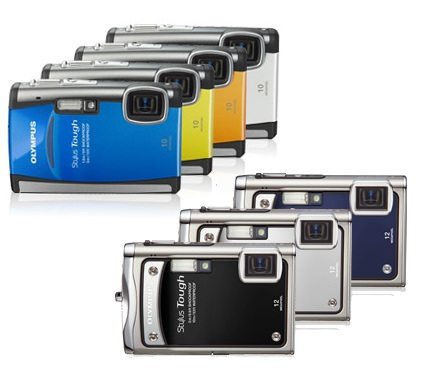 Olympus’ unique range of waterproof, shockproof and freeze proof TOUGH cameras has grown with the addition of the 12 Megapixel TOUGH-8000 and the 10 Megapixel TOUGH-6000. Both models feature 3.6x wide zoom lenses, great for taking awesome wide-angle photos of rugged terrain and for zooming in on the distant bits that you can’t get to.

Blur caused by camera shake is virtually eradicated on the two new TOUGHS, thanks to Dual Image Stabilisation and, as both cameras feature TAP Control, they can be operated by simply tapping on their casings. The TOUGH-8000 and TOUGH-6000 let you take extremely good photos in extreme conditions. 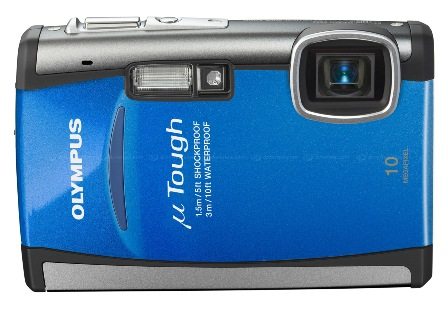 The new top-of-the-range TOUGH-8000 is waterproof to 10m, shockproof to falls from up to 2m, freezeproof down to temperatures as low as -10°C and crushproof to weights of up to 100kg.

Fellow newcomer, the TOUGH-6000 is no wimp either. As well as being freezeproof, this model is waterproof to 3m and impervious to drops from up to 1.5m. 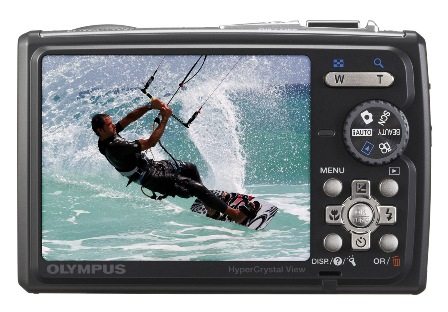 Both models inherit the versatile 3.6x wide optical zoom first seen on the EISA Award winning Olympus 1030 SW. Starting at 28mm wide-angle, fantastic for landscapes and architectural photos, this lens zooms up to a useful 102mm, which is ideal for concentrating on more distant subjects. And Dual Image Stabilisation significantly reduces image blur caused by camera shake, even when the TOUGH-8000 and TOUGH-6000 are being used in challenging situations.[adsense] 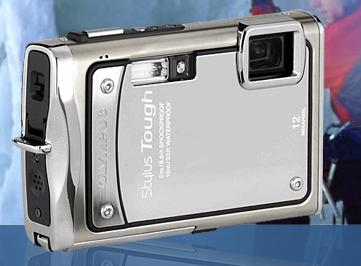 The TOUGH-8000 and TOUGH-6000 are packed with features that make beautiful photos a cert. And, with 12 and 10 Megapixels resolution respectively, results can be enlarged as big as you wish. Capable of recognising up to 3 faces, the TOUGH-8000’s Face Detection Technology guarantees that human subjects are always perfectly focused and exposed. 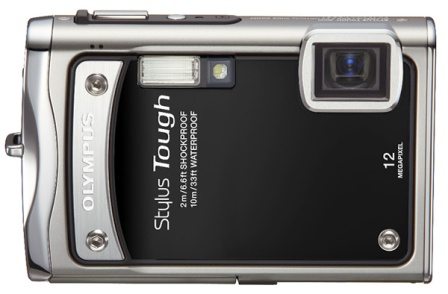 The TOUGH-6000, which boasts Advanced Face Detection Technology, goes one better and can detect up to 16 faces. It also has a handy Smile Shot feature which automatically takes the picture as soon as the subject smiles and, for even happier results. Beauty Mode can retouch their skin as the shot is being taken, removing lines and wrinkles for a smooth glowing complexion.

To further improve picture quality Shadow Adjustment Technology has been included to boost shadow detail that would otherwise be lost. And for the ultimate in photography convenience, Intelligent Auto Mode analyses the image being photographed and matches it to one of five commonly-used scene modes, automatically selecting the best choice. 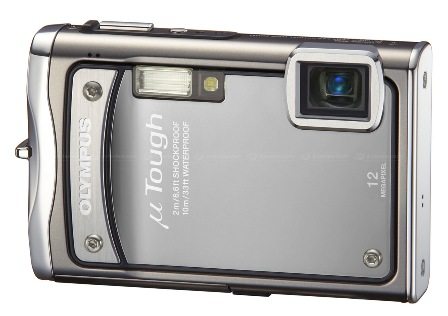 As an alternative to the intuitive on-screen menus displayed on their 6.9cm/2.7” HyperCrystal III LCD screens, the TOUGH-8000 and TOUGH-6000 also feature Tap Control. This allows fast access to a range of settings simply by tapping the camera body – even when wearing gloves, such as when skiing.

The TOUGH-8000 and TOUGH-6000 are waterproof, shockproof and freezeproof, and available in a range of great colors – so picking the right one might prove tough too! Expect to see them in UK stores in mid-January and early February 2009 respectively.

The AWOL LTV-2500 is an ultra short throw laser projector that can play video at 4K UHD with support to HDR10+ thanks to its Triple Color Chroma Pure Laser, featuring an adjustable projection size between 80" to 150" at just 6" distance from a wall, built-in 36W Stereo Speakers that also support Dolby ATMOS, and multiple input options (two standard HDMI, one HDMI eARC, two USB 2.0, one Ethernet port, a Digital Audio Output port, an AV Input port, and a TV-Stick Pocket). In sum, this ultra short throw laser projector boasts a Triple Color Pure Laser engine that completely revolutionizes the way you watch your favorite content at home. The AWOL LTV-2500 can display its 4K UHD resolution video for up to a 120" image-size by projecting its radiant colors onto any wall, all while simultaneously creating an enthralling listening experience thanks to its 36W Stereo Speakers and Dolby ATMOS integration. Best of all, you can have it neatly set-up just inches away from your wall, which means that you won't even have to deal with a bunch of tangled wires.
Read more
Media Gadgets

The Monster Blaster 3.0 is a 120-watts portable weatherproof speaker that features Bluetooth Connectivity with NFC Pairing, outstanding sound and bass, Dual Stereo Sound Modes, and up to 12 hours of battery life. With an explosive 120 watts of power and innovative features like its Environment EQ technology which automatically optimizes the speaker's sound by triggering its Indoor or Outdoor Modes with the simply push of a button, the Blaster 3.0 is THE portable Bluetooth speaker to have for all 21st-century music lovers. In addition, its ultra-durable construction allows the speaker to be brought virtually anywhere, while its internal battery doubles as a portable power bank via a built-in USB-A Output Charging Port for conveniently recharging the battery of your other devices.
Read more
Media Gadgets

The Meeting Owl Pro is a WiFi-enabled 360º smart video-conferencing device camera that boasts a high-resolution 1080p video and great sound quality, which is even compatible with all Video-Conferencing Platforms, including Zoom, Microsoft Teams, and more. In other words, this all-in-one video conferencing device is designed to provide business workers of all sorts with an exceptional video-conferencing experience for all of their business meetings held virtually.
Read more
Media Gadgets

The Sonos Roam is a lightweight portable smart speaker that features a durable and waterproof-construction, great sound quality, both Bluetooth and WiFi Connectivity, support to Apple AirPlay 2, Voice Assistant Support and up to 10 hours of battery life. Boasting an unbelievable sound quality both for at home and on-the-go listening, this lightweight and outdoor-ready portable smart speaker was designed to let you appreciate your favorite tunes anywhere and at any time. With it, you can enjoy countless hours of listening to music, radio, audiobooks, and more, all while the Roam's long-lasting rechargeable battery ensures an all-day listening experience.
Read more