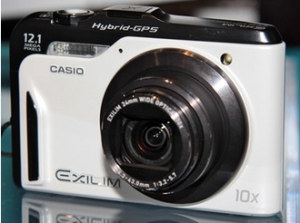 Casio are launching a new hybrid GPS camera that aims to track where you are when you capture photos both in and outdoors. It achieves this by using a mixture of GPS data and accelerometer data. The theory behind the Hybrid GPS system is that most cameras, if not all, spend most of their time out of sight of a GPS lock and thus, you can’t really get a fix most of the time. By getting a fix with the GPS unit the camera system can then measure with accelerometer movement where the camera is moving and what direction giving a rough estimate to where it is, even when you walk around your home or leave it in the back of the car.

Accelerometers have been found in cameras for a few years now to detect orientation of the camera, ie, is it landscape or portrait and they rotate images accordingly. Some even detect if the camera is the right way up and can then spot the sky more easily and adjust settings accordingly.[adsense]

By mixing the two together the camera will be capable of giving a fairly good geo-targeted guess when it stamps the image file with co-ordinates. 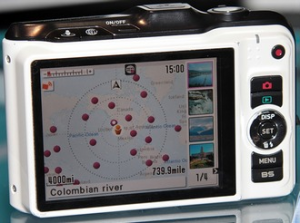 From what the picture below shows it seems like a mapping system is also included on the camera that uses push-pins to mark where your photos were taken allowing you to flick through them by location.

Casio Hybrid GPS Back 300×223 Casio Hybrid GPS Tracks both in and outdoorsGPS isn’t used that much in cameras yet and a lot of cameras rely on external GPS systems that link with your camera. Part of the reason is probably battery life. By using a hybrid system Casio could just turn the camera’s GPS on from time to time to get an exact location and then carry on with the inertia from the accelerometers to fill in the gaps.

It’s certainly going to be an interesting year for cameras again just like 2009 was. Add in digital compasses and the wireless features of some cameras then you’ll know which direction the photo was taken and be able to upload to Flickr. Maybe