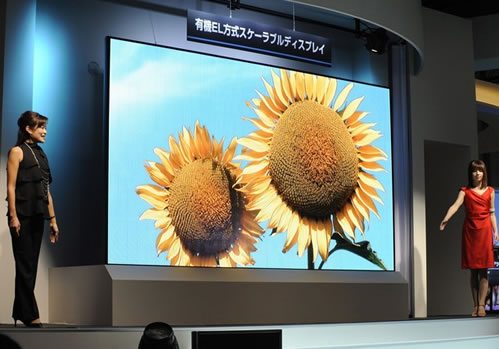 I like the idea behind OLED TVs with better colors, thinner profiles, and less power needed to run the things. I am not a big fan of the massive price premium that is placed on most OLED sets right now. We have for the most part only seen smaller screen OLED displays on the market, but that is changing.

Mitsubishi has unveiled the gigantic 149-inch prototype OLED display at ISE-2010 in Amsterdam. The massive screen has a resolution of 1088 x 640 pixels with a 3mm pixel pitch. This thing may well be the best display ever for watching the Super Bowl.

The big screen has light output of 1500cd/m2 making it much brighter than the average LCD on the market today. I don’t even want to think of how expensive an OLED this size would be when a small OLED will set you back a grand or more today.