Design concepts are cool simply because they offer us a glimpse at the imagination of some folks and what products of the future might look like. We all know 99.9% of all the concept products we see will never the light inside the local Best Buy, but they are still cool to look at. Last week I showed you a design concept for a Microsoft branded mouse called the eVouse over at Yanko Design. 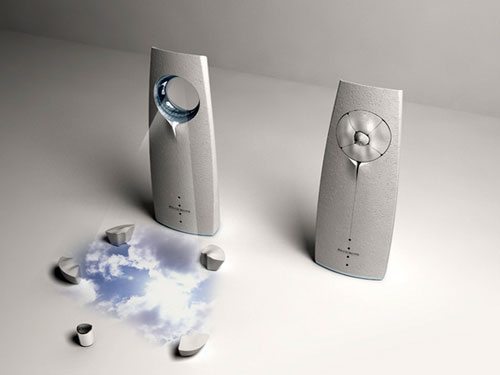 Today another new and interesting concept has showed up at Yanko Design called the Sound Scape. The idea of the Sound Scape system reminds me a bit of the Phillips AMBX system taken to the next level. The idea is that the speakers have a little projector inside.

As you play your music, the tiny LED pico projector in the speaker will project images to go along with the music on your desktop. It appears that the little inserts that cover the projector help determine how large the image is. So if you are playing some classical music you get clouds, what do you see if you play Metallica?