Nintendo will announce a new 3D-capable handheld gaming console called the Nintendo 3DS at E3 this coming June. The Nintendo 3DS will allow you to play games with 3D effects without the need for any special glasses, according to Nintendo. 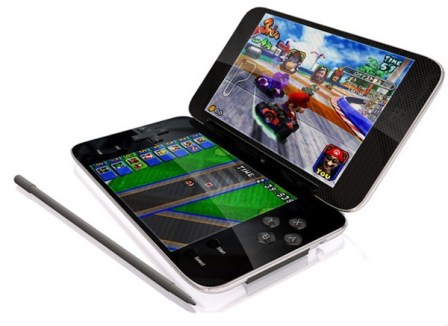 The company will release the new 3D handheld console at some point within the next financial year, between April 2010 and March 2011. Nintendo president Satoru Iwata previously stated that the 3DS has been in the works for sometime, and that the Nintendo 3DS will be fully retro-compatible with Nintendo DS and DSi games.

Nintendo recently released a DSi game in Japan that used the devices’ camera to track your head movements in order to deliver a glasses-free 3D illusion to the gamer. It’s not clear if this is the type of 3D tech that Nintendo plans to make use of in the Nintendo 3DS.

Here’s the full announcement in English:

“Nintendo Co., Ltd.(Minami-ward of Kyoto-city, President Satoru Iwata) will launch “Nintendo 3DS” during the fiscal year ending March 2011, on which games can be enjoyed with 3D effects without the need for any special glasses.”

“Nintendo 3DS” is going to be the new portable game machine to succeed “Nintendo DS series”, whose cumulative consolidated sales from Nintendo amounted to 125 million units as of the end of December 2009, and will include backward compatibility so that the software for Nintendo DS series, including the ones for Nintendo DSi, can also be enjoyed. We are planning to announce additional details at E3 show, which is scheduled to be held from June 15, 2010 at Los Angeles in the U.S”