Velocity Micro is launching two new tablets, which run Google’s Android OS, the Cruz Tablet and Cruz Reader. The Cruz Reader is the cheaper of the two and it features a 7-inch touchscreen display, Adobe Flash 10.1, SD card Slot and an 800MHZ processor. 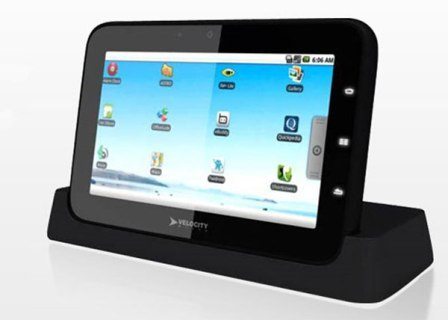 The Cruz Tablet also feature a 7-inch Touchscreen display, has support for Adobe Flash 10.1, and also has an 800MHz ARM processor and an SD card slot.  Both will run Android 2.1.  Other features on both the Tablet and the Reader include a browser and media player, an accelerometer, USB connectivity and a 3.5mm headphone socket, along with a user-replaceable battery, speaker and microphone.

The 7.5 x 5.6 x 0.6 inch Cruz Reader will be targeted, as the name suggests, as an eReader, with the “Cruz Market” app store for downloading software and ebooks.

Meanwhile the Cruz Tablet throws in a 2-megapixel front-facing webcam together with a docking station that charges the slate as well as allowing it to work as a digital picture frame. Besides over 50,000 Android Market apps, both models with have access to application from the ‘Cruz Market’.

A RAM-only server is a VPN server that runs entirely on random access memory (RAM - Random Access Memory). Because RAM is “volatile memory”, all information is erased every time the server is turned off and on again.
Read more
Outdoor

The BALL Watch Engineer III Pioneer is a third-generation exploration watch that features a super-durable Stainless Steel construction which gives it a whopping 5,000Gs shock-resistance along with an extreme anti-magnetic protection up to 80,000 A/m, plus a Water-Resistance Rating up to 330 ft. / 100m, all while being powered by BALL’s COSC-Chronometer-certified Automatic Calibre BALL RR1103-C Hand & Date Movement, meaning that it never needs a battery, and also boasting an impressive self-powered illumination technology powered by 28 H3 micro tritium gas tubes on all of its watch hands and dial for an outstanding nighttime reading capability. Designed as a watch that's rated to have a high-endurance even when worn in the most challenging environments, this durable, gorgeous, and super-versatile timepiece allows you to always keep a proper track of time anywhere you decide to go, whether that's when you're at work, chilling at home, or even while you're out adventuring and exploring the outdoors.
Read more
Luxe List

If you’re anything like me—a savvy shopper indelibly on the hunt for great gifts and gets that can be bought online with all of...
Read more