Gigabyte’s notebook division has unveiled a few details on its new 11.6-inch convertible notebook that will be launched at Computex, alongside the first picture of the M1125. 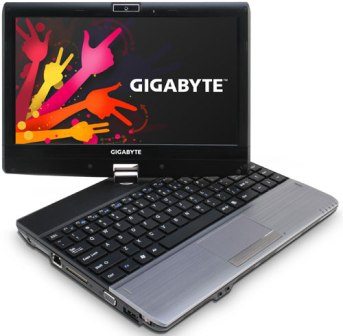 Gigabyte has gone for an unspecified Core i processor in the M1125. They have also added USB 3.0 connectivity, which is slowly becoming a popular feature on notebooks. The only other ports that can be seen from the picture Gigabyte sent out is a D-sub connector, a docking port intended for a  “innovative docking station that includes an optical disk drive”, an Ethernet port and a couple of front audio jacks. It also has a webcam, and Gigabyte has jumped on the chicklet type keyboard trend. The screen does of course feature touch technology, but again, we don’t have any details as to exactly what type of touch screen Gigabyte is using.
Here’s the press release….

*”GIGABYTE Focuses on Extreme Performance and Flexibility for Computex 2010*

*TAIPEI, TAIWAN, May 28, 2010 – GIGABYTE will showcase a wide range of new *
*technologies** at Computex 2010 in Taipei, Taiwan. From June 1st to June 5th, the IT manufacturer will exhibit the latest gear and highlight the benefits that end-users can expect.*

*The newly released GA-X58A-UD9 motherboard shows GIGABYTE’s innovative approach to research and **development**. The new flagship motherboard is considered the most premium motherboard available on the market and already owns numerous overclocking and benchmark world records.*

*GIGABYTE has also added a new premium graphics card to its product lineup for Computex 2010. The GV-R587SO-1GD is based on the ATI Radeon HD 5870 GPU and was designed specifically for extreme overclocking and gaming battles. The Ultra Durable VGA+ components offer excellent performance and stability during heavy loading.*

*On the notebook front GIGABYTE has set itself apart by releasing a new ultra lightweight 14-inch notebook called the M1405. In addition to stylish looks, this innovative product also includes a docking station with a built-in Nvidia GeForce 220 graphics card. Users will enjoy the ease of portability when on the go and powerful HD graphics performance when connected to the Booktop docking station.*

*Another unique component to be shown at Computex 2010 is the Monitor Integrated Box, or MIB for short. It is a computer chassis that includes an adjustable mounting arm with hinge which allows **technology** enthusiasts to build their very own All-in-One PC.*”

Big Data: Are you really sure you understand it?