What are the perfect headphones for the Xbox 360?  The Spectrum 4xb and 5xb headphones each have independent audio and voice controls built for Xbox Live communication, retractable mic and a LiveMix quick button that balances the game audio and chat. The 5xb is the higher end of the two. They dismantle into 3 pieces for travel, have 40mm drivers and durable double-braided nylon. 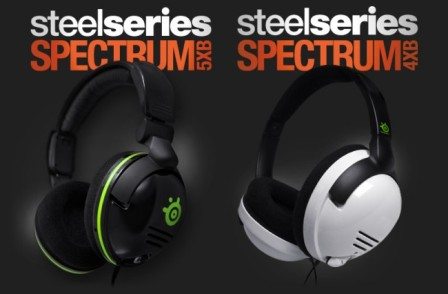 “For more than a decade, SteelSeries has created peripherals to meet the needs of the most discerning PC gamers and provide a competitive advantage based on comfort,

technology, and design,” said Bruce Hawver, SteelSeries CEO. “With the new Spectrum line, we’re leveraging what our award-winning PC headsets are known for, which are superior levels of comfort and sound quality. We’ve added unique features, specific to Xbox 360 gaming, in order to meet the demand for premium console headsets.”

SteelSeries Spectrum 5xb and 4xb headsets present players with an advanced soundscape, providing the ability to pinpoint the directional sounds of footsteps and grenade drops without them being drowned out by deep bass sounds from explosions or in-game chat. Comprised of new features intended to enhance a gamer’s audio experience, the headsets include:

– Easy access to independent audio and voice controls provides players with complete and intuitive control of volume levels for in-game audio and Xbox LIVE® communication.
– SteelSeries LiveMix offers players the quick-button option to improve the balance and mixing of Xbox LIVE chat and in-game audio, so that voice communication is mixed perfectly with or over the sounds of gunfire and explosions, without having to increase the volume of the headset and risk hearing damage.

SteelSeries Spectrum 5xb
Designed as a premium quality, wired headset for Xbox 360 gamers, the SteelSeries Spectrum 5xb has XL-sized, hear-through cloth ear cushions that fit comfortably around the ear. With the custom-built soundscape via 40mm SunDancer (SCS) units, gamers can pinpoint the direction and locations of noises and movement throughout the game. The SteelSeries Spectrum 5xb features a durable double-braided nylon cord and dismantles into 3 separate parts, at the headband and at each earcup making it compact and easy to fit into a carrying case for storage and/or travel.

A retractable, unidirectional microphone is featured on the entire SteelSeries Spectrum headset line, making the voice communication for Xbox LIVE users adjustable, convenient and clear. As a familiar SteelSeries feature, the microphone can be stored in the left earcup when not in use, while a control on the included Spectrum AudioMixer independently adjusts in-game audio and microphone volume.

SteelSeries Spectrum 4xb
As the entry-level, wired headset designed for Xbox 360 gamers, the SteelSeries Spectrum 4xb is a lightweight headset featuring XL-sized, cloth covered foam ear cushions that surround the outside of the ear for long session comfort. The circumaural design enhances the gaming experience through carefully adjusted sound reproduction. Similar to the Spectrum 5xb version, the Spectrum 4xb also features the signature retractable microphone and an optimized soundscape for gaming.