When you get married, you want everything to be special for you and your partner. And while the dress may be unique, the wedding itself may be just like someone else’s in the past. Especially when it comes to rings. For the most part, there seem to be only so many different variations you can have out there, unless you start thinking outside of the box, that is. For one man, he definitely thought out of the box, and managed to design a ring that’s probably one of the coolest little gadgets we’ve seen in a long time. 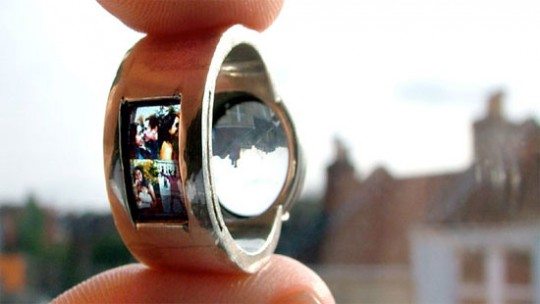 The designer, a man named Luke Jerram, worked with a jeweler Tamrakar to create the projector ring. It’s a wedding ring that features a built-in lens and a transparent slide that has an imago of himself and his bride. What makes it better, though, is when you shine a light through it. As you might imagine, that’s where the whole “projector” part comes into play.

And to make it better, the image can be replaced with another, so Jerram can keep his memories alive right there in his ring. Unfortunately, the projector ring is a one of a kind item, and the designers have no plans to create another one for anyone else. In fact, the designer goes as far as to say, “…I’m afraid you’ll have to make your own unique ring for your own unique partner!” If that’s not dedication, we don’t know what is. And at least Jerram has something that’s truly unique, almost as much as his wife.