With the Windows Phone 7 Phone’s planned October release date rapidly approaching, Microsoft has chosen Gamescon 2010 in Germany to reveal the first wave of Xbox LIVE games that will be available on launch. The WP7 device’s Games hub would put the power of Xbox LIVE in the palm of your hand. 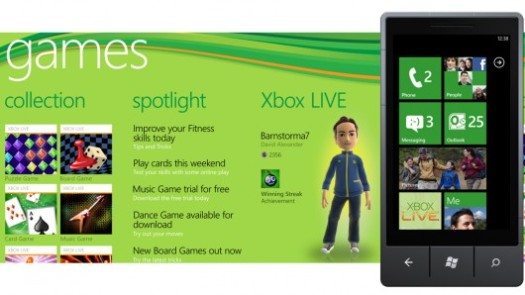 The first set of announced games is huge, representative of Microsoft’s recognition that mobile phones are evolving into a major gaming platform. Mobile gaming is already a billion-dollar industry in the U.S. and will continue to climb. Microsoft’s own internal research backs that up, showing that 80 percent of gamers in the U.S. have, or will purchase a smartphone this year, and a quarter of what gamers spend on games is spent on mobile gaming.

The list includes Xbox LIVE games from the likes of Gameloft, Konami Digital Entertainment, Namco Bandai, PopCap and THQ. The WP7 will also be supported by content from Microsoft Game Studios (MGS), which now has a dedicated group tasked with delivering all new mobile-specific games and extending the best console games onto Windows Phone 7. This includes companion titles to familiar names, such as “Halo: Waypoint,” and “Crackdown 2,” designed to extend the experience of these Xbox 360 franchises.

In addition to providing a single location to view and launch games from your full game library, the WP7 is designed to seamlessly integrate Xbox LIVE in other ways. Users will be able to:

Microsoft says additional titles in the launch portfolio will be released as the phone’s release date draws nearer, with new Xbox LIVE titles to be added to the games portfolio every week once the phone launches.

Here are the titles that will be introduced: