Augmented Reality (AR) is a popular trend in mobile app development. With AR, you can point your mobile device’s camera at a street, and having information about the buildings and businesses appear on their screen superimposed over the images in real time. A prototype mobile AR device is being tested, that concentrates more on topography than urban exploration. The Marmota mobile AR can tell you things like what the names of those mountain peaks over there are, what their elevation is, and how far away they are. 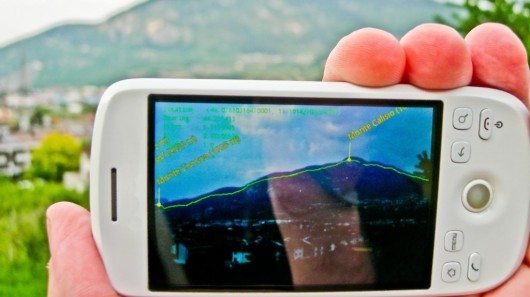 The Marmota was designed by Michele Zanin, Claudio Andreatta and Paul Chippendale, researchers at the Technologies of Vision Unit (TeV) in the Information Technology Centre of Fondazione Bruno Kessler (FBK) in Trento, Italy. “The system integrates technologies and findings from different disciplines, spanning cartography to computer graphics, and sophisticated machine vision algorithms,” said Zanin. “Each pixel of the image is associated with information such as altitude, latitude, longitude and distance from the observer”.

Marmota locates itself with a built-in GPS, then sends that information via the Internet to the central Marmota server at FBK. Once those coordinates have been processed by that server, a data package of about 50 to 120 KB is sent back to the device, and displayed as a high-resolution 360-degree augmented onscreen overlay. The device itself reportedly only uses a small amount of memory, letting the server do the majority of the processing.

The Marmota can also provide things like the names and locations of counties, roads, hiking trails, rivers and lakes, and will draw these items onto the screen to highlight them. It limits itself to what’s visible from the user’s point of view, so as not to create confusion with an overabundance of information.

Technologies of Vision Unit has been working on the project since 2007. The Android-based Marmota currently works anywhere in the world between 60 degrees latitude north and 60 degrees south. “User testing will follow in the immediate future and will involve volunteers from outside FBK and will hopefully identify critical points in the system, thus helping us to transform the current ‘prototype’ into an application that can be enjoyed by the general public” said Zanin.

Humans have a complex relationship with social media platforms. They could be a way to reconnect with old friends and to grow closer to...
Read more
Computers

Today Samsung is posting a Facebook invitation for their CTIA Orlando showing, hinting at a new tablet the company plans to unveil.  The device...
Read more
Media Gadgets