AT&T has made the Sony Ericsson Vivas, which runs on Symbian (S60), official. The handset will have a quad-band GSM and UMTS/HSPA radio, 8.1 megapixel camera with 720p video recording, 3.2-inch 360 x 640 TFT nHD resistive touch-screen display, Bluetooth, aGPS, micro-SD card slot, and come in Galaxy Blue and Venus Ruby. The device will be priced at $79.99 after a $50 mail-in-rebate. 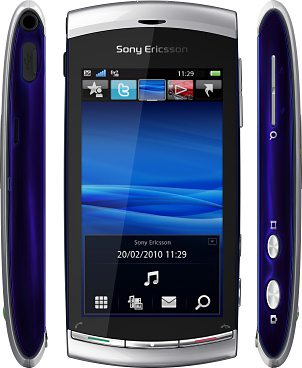 With Vivaz™, AT&T customers can capture spontaneous moments and memories instantly with two quick camera keys – video and photo, which lock focus on the action as soon as it starts. Pre-loaded links to YouTube™ and Picasa™ Web Albums make it easy to upload HD videos and high resolution photos for sharing with friends and even the world.

In addition to its superb imaging features, Vivaz is loaded with applications to keep customers connected to their world. Topping that list is AT&T Social Net, allowing customers to share exciting moments with friends– on Facebook®, MySpace™ and Twitter®– all through one simple application. Other highlights include Wi-Fi®, aGPS with AT&T Navigator®, Stereo Bluetooth® wireless technology, and Vlingo® voice recognition interface for searching the Web, composing notes, and more.

“Working with Sony Ericsson to deliver a best-in-class video and camera phone on the nation’s fastest mobile broadband network gives our customers even more opportunities to express themselves through their favorite social networks,” said Michael Woodward, vice president, Mobile Phone Portfolio, AT&T Mobility and Consumer Markets. “With Vivaz capturing photos and video in stunning HD and sharing it on YouTube™ or Picasa™ Web Albums is quick and easy.”

“Shooting and sharing brilliant HD content is what creativity-minded consumers want from their mobile devices right now and we are delivering it with Vivaz™,” said Paul Hamnett, senior vice president, Sony Ericsson North America. “With a host of dynamic multimedia and social networking features, and offered at a very attractive price, we are putting the power of spontaneous HD in the hands of everyone.”