Logitech’s new Z623 2.1 PC speaker setup gives you 200 watts (RMS) of power through two satellite speakers and a subwoofer, with a 3.5mm jack for laptops, as well as a headphone input. The Logitech Z623 has THX certification, and is available for around $150. 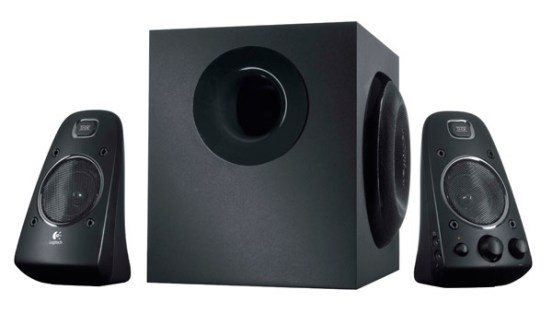 FREMONT, Calif.–(BUSINESS WIRE)–For big, bold sound from your music, movies and games, Logitech (SIX:LOGN) (NASDAQ:LOGI) unveiled the THX® Certified Logitech® Speaker System Z623. With this 2.1 system, you’ll hear and feel immersive audio from 200 watts (RMS) of power whether you’re connecting the speakers to a PC or a TV.

“That’s why we built the Logitech Speaker System Z623 – so you can lose yourself in whatever you’re into. For DVD aficionados, music enthusiasts and hardcore gamers, the Z623 system delivers powerful audio for your room. And with THX certification, you know you’re getting the best.”

“Whether you’re listening to rock music, watching a Steven Spielberg flick, or playing your favorite video game, the experience is always richer when you get engrossed in the audio,” said Mark Schneider, vice president and general manager of Logitech’s audio business unit. “That’s why we built the Logitech Speaker System Z623 – so you can lose yourself in whatever you’re into. For DVD aficionados, music enthusiasts and hardcore gamers, the Z623 system delivers powerful audio for your room. And with THX certification, you know you’re getting the best.”

So you can set up the system the way you want, Logitech includes all the inputs and cables you need to get great sound from up to three audio devices. With the RCA and 3.5 mm inputs, in addition to the built-in headphone jack, you can be set up in minutes to enjoy great sound from your computer, game console, digital music players, TV or DVD player. And to put you in command, the integrated controls on the right speaker satellite let you dial the volume and bass up or down to customize your listening experience.

To get you totally immersed in your audio, the Logitech Z623 speakers are THX Certified and professionally engineered to recreate the tonal balance of whatever you’re listening to. To qualify for THX certification, the two-satellite-and-subwoofer Z623 speaker system has to meet strict performance standards. Logitech engineers have worked closely with THX, conducting more than 400 acoustic and electrical bench tests covering frequency response, power output, distortion, noise and overall performance. For the Logitech Z623 speakers, the result is front speakers that deliver dialogue and ambient sounds so clear it’s like you’re on the set of your favorite film. And you’ll hear powerful, deep bass from your subwoofer as it recreates the roar of a jet engine or the sound of a collapsing bridge.

The Logitech Speaker System Z623 is expected to be available in the U.S. and Europe in September for a suggested retail price of $149.99 (U.S.).

5 Most Surprising Blockchain Hacks in 2019