HP’s web-enabled printers already featured touchscreen control panels and wireless printing, but now the company has gone one step further by including a detachable 7-inch Android with its new Photosmart eStation c510 All-in-One printer. While the prospect of a printer with a free Android tablet might sound pretty tempting, there are some caveats. Although it’s possible to browse (and print) online content using the device’s web browser, there’s no access to the Android Market with apps and widgets limited to customized print-focused offerings from the likes of Yahoo, Facebook and Snapfish. 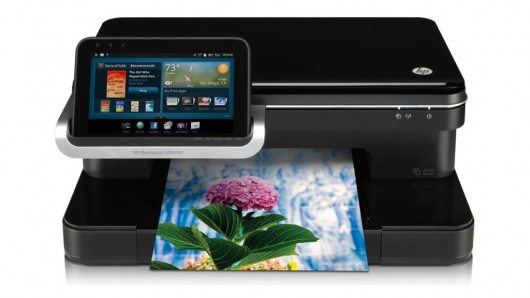 HP says it hasn’t included access to the Android Market on the device because applications in the market aren’t designed for smaller screens. Instead, users will be able to download additional applications through HP’s own application store. The company has partnered with 45 companies, who will develop print-centric applications for the device for printing specialized content such as weather reports, news, sports and finance info, recipes, maps and eBooks. Applications from the likes of Delta Airlines for printing boarding passes, Barnes & Noble for downloading and printing eBooks and NBA.com for accessing game schedules and information were just a few of examples named by HP.

The detachable Wi-Fi tablet is running a version of Android specifically retooled for the device and, although users won’t be able to play games, HP says the user interface is customizable and users will be able to access social networking applications such as Facebook, play music on the built-in music player, or use the device as an eReader. The tablet boasts 802.11n and, when undocked, will provide from four to six hours of battery life. It will also work with all HP wireless printers. The printer can also scan and fax documents without the need of a phone line.

HP obviously feels that allowing the control panel to be detached from the printer is the next logical step following on from its web-enabled printers released earlier this year that allow documents to be sent to the printer via email. By providing a tablet with the printer to allow for wireless printing, HP is no doubt aiming to make it as easy as possible for users to print anything at any time so it can rake in the cash from where it really makes its money – selling the ink. It is this business model that allows HP to bundle an (albeit hamstrung) tablet with a printer for a price comparable to some standalone tablets.

HP didn’t reveal a shipping date for the Photosmart eStation All-in-One printer but said it would cost US$399. Although the tablet will work with all HP wireless printers, the company didn’t say whether it had plans to sell the tablet independently.