Samsung’s new Android-based Continuum model sports two AMOLED displays. Sitting underneath the main screen is a ticker display that is used to feed the user news and information without interfering with what’s being displayed above. Other features include a 5 megapixel camera, the ability to act as a hotspot for other wireless devices, and a six-axis sensor that works with the accelerometer to offer fluid pan and tilt gaming.

Samsung says that its new Galaxy S smartphone is the world’s first smartphone designed with a dedicated ticker display that can be user-configured to provide updates of the day’s news, sports, social networking or finance. The Continuum’s 1.8-inch super AMOLED ticker sits beneath the 3.4-inch main multi-touch display and can host media player controls as well as user-configured information feeds and incoming message alerts. Users need only grip the bottom edges of the phone to illuminate the ticker display. 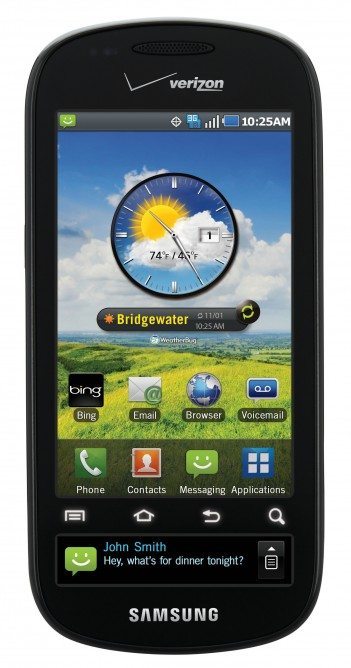 The smartphone runs on Android 2.1 and includes support for Google Mobile services including GMail, YouTube, Google Talk and Android Market. A 1GHz Cortex A8 Hummingbird application processor is super fast, and in addition to its own 802.11b/g/n functionality, the Continuum can be transformed into a wireless 3G mobile hotspot for up to five other Wi-Fi devices. Completing the wireless line-up is stereo Bluetooth functionality.

There is also a 5 megapixel camera with autofocus and LED flash, that benefits from 4x digital zoom and is capable of shooting 720p high definition video. Storage is taken care of by a supplied 8GB microSD card to supplement the 2GB of onboard memory, while the virtual QWERTY keyboard features Swype technology that caters for one finger continuous input. 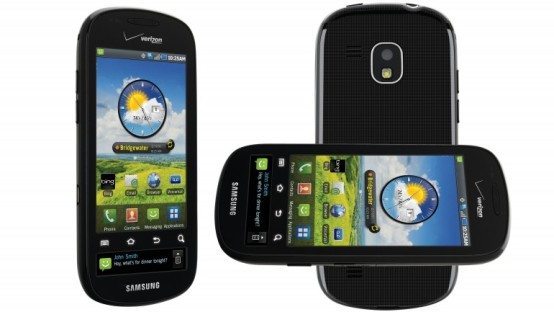 The Continuum comes pre-loaded with Bing Maps and Search, and also includes V CAST Music with Rhapsody as well as Song ID, Tones and video on demand. The AllShare feature allows users to send and receive multimedia content between the phone and other DNLA-compliant devices. Samsung is claiming a battery life that’s good for 312 hours standby and 420 minutes talk time

The Continuum is being made available to U.S. customers via Verizon from November 11 for US$199.99 (after the buyer agrees to a 24-month contract and receives a $100 mail-in rebate). Retail outlets will begin stocking the smartphone starting November 18.

Wink just created Relay to control virtually your entire home, such as lightbulbs and thermostats.  Wink itself is an app that's been around for a...
Read more

The XpanD X103 active shutter glasses allow you to enjoy 3D content on different televisions and 3D-enabled devices, and can work on almost all...
Read more