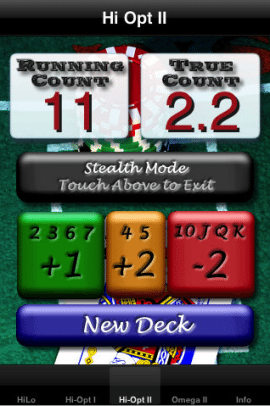 Card counting–a complex practice that gives practitioners a way to determine the optimal times to bet in blackjack–prevails to this day. And it’s not even illegal, though being caught at it is sure to lead to a couple of fingers broken and a lifetime ban at your favorite casino. What is definitely illegal, however, is the employment of any kind of electronic device that aids players in counting cards.
The California Bureau of Gambling Control, somewhat recently, issued an alert to the Nevada Gaming Control Board of the emergence of iPhone card counting apps.

“This blackjack card-counting program can be utilized on either the Apple iPhone or the Apple iPod Touch…Once this program is installed on the phone through the iTunes Web site it can make counting cards easy,” Nevada Gaming Control Board member Randall Sayre wrote in the alert. “This program can be used in the ‘stealth mode.’ When the program is used in the ‘stealth mode’ the screen of the phone will remain shut off, and as long as the user knows where the keys are located, the program can be run effortlessly without detection.”

Use of this type of program or possession of a device with this type of program on it–with the intent to use it–in a licensed gaming establishment, is a violation of the law.  Traditionally, people who use internet gambling sites, play slots online and try to score stacks of chips on the web are not able to use the cheating methods that we find in casinos because they’re playing with a computer.

The makers of “A Blackjack Card Counter,” an Australian outfit called Webtopia, is thrilled with the attention being paid to its app as a result of its potentially illegal nature.

“Since the Nevada Gaming Control Board warned casinos about ‘A Blackjack Card Counter’ there’s been an unprecedented demand for this app,” Webtopia wrote in the tool’s official App Store description. “Now you can see what all the fuss (is) about at a very reasonable price.” 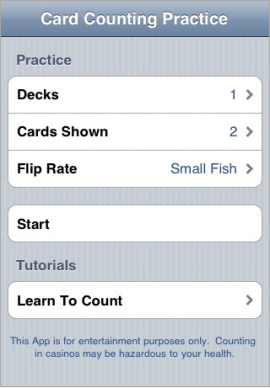 According to Webtopia, the app “allows any blackjack player, professional or amateur, to keep track of their blackjack card count.” Among the features it offers are a “count vibrate,” which vibrates the iPhone or iPod touch “when the true count reaches the value you specify…This is particularly useful when using stealth mode.”

Webtopia also cautions users of the app that, “This card counter is great for learning to count cards or for playing blackjack with your friends. While counting cards is deemed legal, electronic card counting devices are illegal in many casinos. Therefore I would not recommend using this app in a casino as you could get into a lot of trouble.”

And in an interview, Webtopia’s Travis Yates, a 35-year-old developer in Cairns, Australia, said that the stealth features of the app–which allow players to surreptitiously hit buttons updating the count on the iPhone while its screen appears black–came as a result of feedback on earlier versions of the app.

“It’s the features people were asking for,” Yates said. “This was very simple at the start. It’s my understanding that the app isn’t illegal, so I thought, ‘Why not?'”

Yates also said that since the Nevada Gaming Control Board put out its alert, sales of the app have risen to around 500 a day, after lingering at 10 or so a day previously.  To Sayre, of the Gaming Control Board, it would indeed be abnormal to issue a public statement about new cheating technology. “But this technology is available and can be utilized for appropriate as well as criminal conduct,” Sayre said in an interview, “and because (mobile) phones are of such prevalent use in all walks of society, because this phone can be used in this capacity, I thought that it was appropriate to notify the entire industry that this capability was available.”

While “A Blackjack Card Counter” might be the only iPhone app specifically called out by the Gaming Control Board, it is by no means the only app that purports to at least teach card counting techniques. Others currently available on the App Store include Card Counter and Card Counting Practice, the latter of which warns, “This app is for entertainment purposes only. Counting in casinos may be hazardous to your health.”

With the advent of these iPhone apps, it may prohibit you from visiting a lot of gambling establishments with iPhone in tow, however have we all forgotten about the online casino world, where you can do pretty much whatever you want in the privacy of your own home. Have at those card-counting apps.  While you’re at it, the best internet roulette games are a blast, and I’m sure they’ll have an App to improves your odds at that as well.