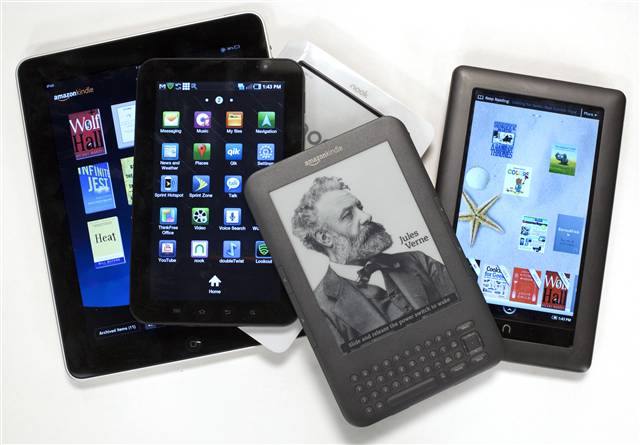 According to IDC (International Data Corporation), a global provider of market intelligence for the information technology, telecommunications, and consumer technology markets,  10.1 million media tablets were shipped in the fourth quarter of 2010 – more than double the 4.5 million shipped in the third quarter. Apple’s share came down from 93% in the third quarter to 73% in the fourth, but still reflected Apple’s strong leadership position. Samsung’s Galaxy Tab was the primary competitor in the holiday season, beating other players to market and capturing more than 17% share, while a number of smaller regional players also participated.

The study also showed that the eReader market also picked up significantly in the fourth quarter. Strong sales of Amazon’s Kindle, which was refreshed in August and priced more aggressively, as well as significant gains from competitors such as Pandigital, Barnes & Noble, Hanvon, and Sony among others, contributed to market growth. The eReader market more than doubled in volume from the 3rd to the 4th quarter, with more than 6 million units shipped for the quarter, bringing the full-year total to 12.8 million units shipped.

Nearly 18 Million Media Tablets Shipped in 2010 with Apple Capturing 83% Share; eReader Shipments Quadrupled to More Than 12 Million, According to IDC

FRAMINGHAM, Mass., March 10, 2011 – According to the International Data Corporation (IDC) Worldwide Quarterly Media Tablet and eReader Tracker, 10.1 million media tablets were shipped in the fourth quarter of 2010 (4Q10) – more than double the 4.5 million shipped in the third quarter. Apple’s share came down from 93% in 3Q10 to 73% in 4Q10, but still reflected Apple’s strong leadership position. Samsung’s Galaxy Tab was the primary competitor in the holiday season, beating other players to market and capturing more than 17% share, while a number of smaller regional players also participated.

The Tracker showed that the eReader market also picked up significantly in the fourth quarter. Strong sales of Amazon’s Kindle, which was refreshed in August and priced more aggressively, as well as significant gains from competitors such as Pandigital, Barnes & Noble, Hanvon, and Sony among others, contributed to market growth.

According to IDC, media tablets are tablet form factor devices with color displays larger than 5 in. and smaller than 14 in. running lightweight operating systems (such as Apple’s iOS and Google’s Android OS) and can be based on either x86 or ARM processors. By contrast, tablet PCs run full PC operating systems and are based on x86 processors. Media tablets support multiple connectivity technologies and a broad range of applications, which differentiates them from single purpose–focused devices such as eReaders. Media tablet market evolution will be driven not only by product introductions from PC, consumer electronics, and mobile phone vendors, but also by expanded distribution channels (with mobile operators playing a key role) and commercial adoption by businesses.

In 4Q10, retailers were the channel with the highest share of shipments, followed by direct and telco sales. A new channel for media tablets, the telco operators, accounted for nearly 14% of all shipments of media tablets in 4Q10 following just over 1% share in the third quarter.

Vendor Highlights: Media Tablets
• Apple is building on its strong 2010 first-generation iPad launch with the iPad 2, which will ship this month, before most competitors come to market with first generation media tablets. Although more competing devices will be launched this year, IDC expects Apple to maintain a 70-80% share of the market.
• Samsung started shipping its 7 in. Galaxy Tab media tablet in 4Q10. Although its shipments into the channel were fairly aggressive, a lack of competitive pricing and ongoing competition from Apple stifled consumer demand. Samsung is expected to follow with a 10.1 in. Galaxy Tab with Android 3.0 Honeycomb later this year, but the refresh will have a tough time maintaining share as more competitors enter the market.
• The recently launched Motorola Xoom is a worthy competitor in function, although the relatively high price is expected to be a barrier to gaining significant share.
• Other vendors and designs are expected to hit the market in earnest in the second half of 2011. Many of these products will be more competitive in function, like the Xoom, but we expect only those from large vendors with significant marketing and channel structure in addition to a few technologically and price competitive devices to capture significant share. One differentiation path that some vendors are likely to take is to focus on specific market segments, such as commercial. While benefitting from unique product positioning, they are likely to address a smaller overall market and will need to be competitive with devices from Apple and others.

Vendor Highlights: eReaders
• Amazon continued to lead the eReader market holding just over 48% share in 4Q10 and 2010 overall. Amazon’s share recovered in 4Q10 with shipments of the refreshed Kindle (3) after dipping under 40% in 3Q10.
• Barnes and Noble began shipping the NOOKcolor color LCD-based ereader in 4Q10 to support children’s books, periodicals, and other graphically rich content. The NOOKcolor is more expensive than epaper-based ereaders and offers a lower priced, less feature-rich alternative to a full-fledged media tablet.
• Pandigital edged out Barnes and Noble for the number 2 spot in 4Q10, although the latter came in slightly ahead on an annual basis.
• Hanvon of China came in as the number 4 eReader vendor with a sequential gain in volume. Half of Hanvon shipments were in China, where it leads the market, but where eReader growth remained modest. International shipments faced greater competition, pushing share down overall.
• Worldwide Sony Reader shipments grew 80.7% during 4Q10 and exceeded 800,000 units for 2010.

The Worldwide Quarterly Media Tablet and eReader Tracker includes quarterly shipment and forecast analysis for over 30 countries including market size and vendor share along with detailed market segmentation and product attributes such as operating system, connectivity, and storage capacity among others.
For more information, or to subscribe to the research, please contact Kathy Nagamine at 650-350-6423 or [email protected].

About IDC
IDC is the premier global provider of market intelligence, advisory services, and events for the information technology, telecommunications, and consumer technology markets. IDC helps IT professionals, business executives, and the investment community to make fact-based decisions on technology purchases and business strategy. More than 1,000 IDC analysts provide global, regional, and local expertise on technology and industry opportunities and trends in over 110 countries. For more than 47 years, IDC has provided strategic insights to help our clients achieve their key business objectives. IDC is a subsidiary of IDG, the world’s leading technology media, research, and events company. You can learn more about IDC by visiting www.idc.com.

The Fauna Memor Havana are ultra-light designer audio Bluetooth glasses equipped with Zeiss DuraVision BlueProtect blue light filtering lenses, 4 high-end USound MEMS micro-speakers and 2 microphones, as well as Touch Sensors in both temples, all while also featuring Bluetooth 5.0 Connectivity, and up to 4 hours of battery life for continuous audio streaming. Requiring no wires, earbuds or open-ear headsets to work, these innovative audio Bluetooth glasses allow you to listen to music, take phone calls, or even interact with your Smartphone's Voice Assistant, all in a completely hands-free manner. All in all, the Fauna Memor Havana allow you to have a more connected lifestyle while simultaneously keeping you fully aware of all your surroundings, with the added benefit of protecting your hearing from the noise-induced hearing loss that earbuds and headphones can potentially cause.
Read more
Media Gadgets

The Blue Yeti X is a professional condenser USB microphone powered by 4 Blue-proprietary Condenser Capsules that features a great audio-recording quality of 48kHz at 24-bit, along with 4 Pickup Patterns to choose from, a Multi-Function Smart Knob that's lets you monitor and adjust multiple voice-recording settings, and High-Res LED Metering that allows you to visualize your voice-level. This professional condenser USB microphone offers content creators of all levels of expertise a simple plug-and-play audio-recording solution for both Windows and Mac. Best of all, it can also be used together with its proprietary Logitech G HUB Software, which not only gives you access to enhanced broadcast vocal effects via the Blue VO!CE Audio Software, but also offers you Customizable LED Lighting Settings to have the Yeti X’s LED lights matching the rest of your computer setup. Designed with content creation in mind, this professional condenser USB microphone is perfect for any content creation activities, including gaming, streaming, vlogging, and podcasting.
Read more
Media Gadgets

The Monoprice SB-600 is a compact and powerful soundbar that offers you a great sound quality via its true 5.1.2 Dolby Atmos surround sound, while also featuring 2 HDMI Inputs, an HDMI eARC Output, both Optical Digital and Coaxial Inputs, a 3.5mm Analog Audio Input, as well as 4K HDR/DV Passthrough, Bluetooth and USB connectivity for streaming. Not only does this high-end soundbar come equipped with built‑in Atmos Height Speakers, but it also comes together with Dual Wireless Surround Speakers and a powerful Wireless 8" Subwoofer. On top of everything, the Monoprice SB-600 also comes with an IR Remote Control that makes it easy for users to configure all of the soundbar's diffferent sound settings as well as control all of its different sound functionalities. When considering all of the awesome sound functionalities and different quality-of-life features offered by the Monoprice SB-600, its safe to say that this is simply one of the best soundbars that you can currently find available.
Read more
Media Gadgets

The Plugable Graphic Adapters are designed with functionality in mind, boasting multiple connectivity options that ultimately allow you to run multiple monitors together via your Desktop PC or laptop. Designed specifically for office work purposes, all of Plugables's USB-enabled Display Adapters are extremely versatile, and overall, they're great for working with web browsers as well as with productivity Apps, such as Google Docs, the Windows Office Suite, and internet use in general.
Read more