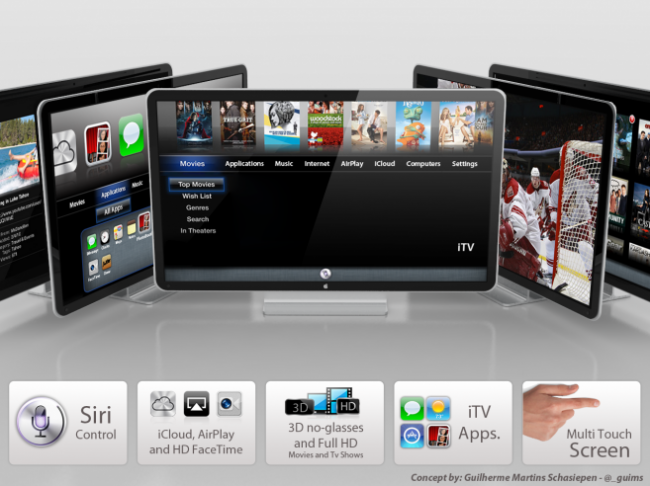 Steve Jobs biography, which debuted last week, quoted the computer industry’s icon as saying, “I’ve finally cracked it.”   He was, of course, talking about Apple TV, and this one quote has once again started the enormous rumor mill regarding the prospect of Apple revolutionizing one more media medium….the television.

A Flickr user has created a mock-up of what Apple could be envisioning, and it ain’t too shabby.   Nor could it be too off the mark with what we know about Apple’s current technology installations with the iPad and iPhone.

So far, the name of the actual Apple TV has waffled from “iTV” to “Apple TV”……and back to “iTV.”   We’re pretty sure that, with the acquisition of SIRI and its integration with the new iPhone 4S, iTV will use this evolving technology as its primary input and channel navigation tool.  It’s also speculated that iTV will be a 3D device, sporting iCloud/AirPlay, HD FaceTime, a multitouch screen, and have the capability of running apps.

If any of these prediction are true, we could be looking at a giant iPhone…..television style.  In terms of its physical appearance, Apple is going more towards getting rid of the bezel, so maybe expect and edge-to-edge screen going forward.

Several industry experts are predicting that you’ll be able to use any of the iOS devices as the remote control for Apple iTV, via an iTV remote control app, complete with TV listings on an iPad, iPhone or iPod Touch.

Apple has made tremendous strides with iOS and Mac OS X Lion, and these advancements look like precursors to what we could see in Apple’s upcoming iTV technology.  Apple is shooting for a late-2012 release of iTV.  More information to come as it comes in.

The Quench is a smart plant-watering sensor system that's able to detect exactly when your plant needs water, for which the system will then notify you with a gentle audible tone. Overall, this simple, yet ingenious moisture-detection solution can make it very easy for you to take care (or better care) of your plants. With it, not only can you completely avoid over-watering your plants, but you'll also never forget to water your plants ever again!
Read more
Miscellaneous Gadgets

The Merge Cube is an App-Enabled AR- and VR-powered Smart Cube that can be used both for teaching and learning, as it allows kids to hold virtual 3D objects in their hands. Overall, the Merge Cube is simply one of the best STEM-leanning tools that you can currently find available, as it allows allow students to learn effectively about many different subjects by having them interacting with digitally created virtual 3D objects for their educational content of choice, which can include Biology, Anatomy, Engineering, the Universe, and much, much more.
Read more