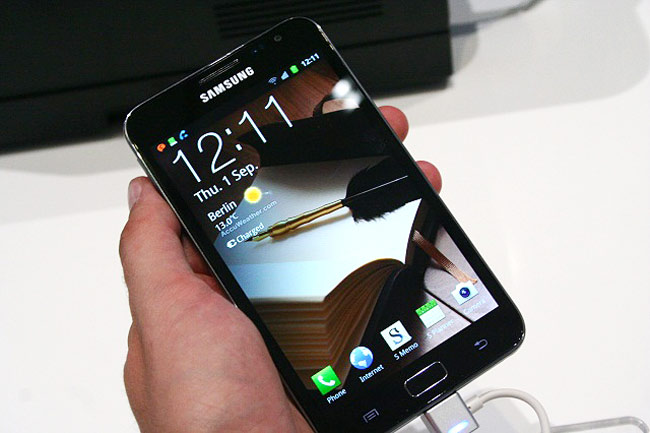 The [amazon_link id=”B0061YRDX6″ target=”_blank” container=”” container_class=”” ]Samsung Galaxy Note[/amazon_link], the latest device from Samsung that crosses a tablet with a smartphone, is coming to the UK this month.  What does this mean for us folks stateside that have been waiting for this thing?  It means that a U.S. release is probably not far behind.

Although the device is listed on the O2 website, the UK carrier that will be selling the device, the link for more details is broken, so we’re assuming more details are being put together.

The device is already available in the UK, although there’s not been too much support for it on the networks. The device is classed as a smartphone even though it has an enormous 5.3-inch screen. The screen has 800 x 1280 pixels at a pixel density of 285 ppi. The screen is also Super AMOLED, and is covered by Gorilla glass.

The [amazon_link id=”B0061YRDX6″ target=”_blank” container=”” container_class=”” ]Samsung Note[/amazon_link] runs Android 2.3, and has the TouchWiz 4.0 UI running on top.  Although it already launched earlier this month, the uptake by carriers hasn’t been that great. It’s a unique device and quite large.  It includes a stylus, which distinguishes it among other larger smartphones.  Samsung’s intent with this device is to create a whole new category of devices, allowing smartphone and tablet users to consolidate their gear into one sharp piece of technology to tote.

Expect more details about the O2 launch to appear shortly.  We do know that [amazon_link id=”B0061YRDX6″ target=”_blank” container=”” container_class=”” ]Amazon[/amazon_link] has it on sale right now for $899.