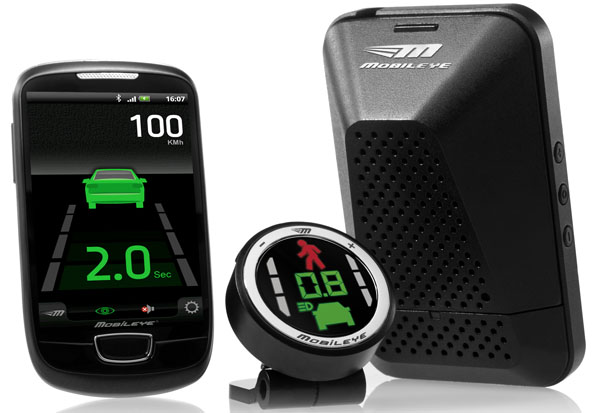 We take the open highway for granted, especially when we’re operating a 4000-lb automobile.   I don’t think I need to tell anyone that accidents happen every day, many of which are avoidable if today’s drivers paid a bit more attention to the road and not their smartphone or radio.  How nice would it be to have a copilot monitoring your driving behavior, and provide you with a heads up to those obstacles and distractions on the road.  Introducing the Mobileye 5-Series.

The Mobileye 5-Series is similar to some of the systems found in today’s luxury vehicles, though this one can be outfitted in any car as an aftermarket part.  It is composed of a camera and heads up display.  Inside the camera is a microprocessor that actively watches the road as you drive and warns you of any impending dangers, such as a bicyclist in the road or a stopped car in the middle of a freeway.  It’s capable of alerting a driver 2.7 second before a crash, which might just be enough time to avoid one.  The system can also be programmed to teach you to keep a safe driving distance from vehicles in front, warn you of a dangerous lane change, lower and raise your vehicle’s high beams, and read speed limit and traffic signs to help you reduce the likelihood that you’ll get into an accident or receive a ticket for speeding. 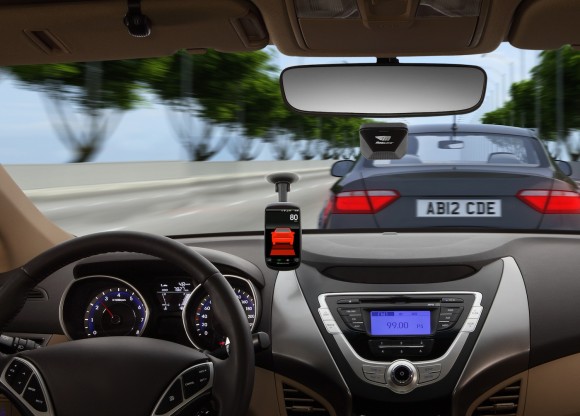 It can be wired into your car to control the highbeans, and it also connects to your smartphone (Android or iOS) via Bluetooth, providing the same information displayed on the included heads up display.

We don’t need the National Highway Traffic Safety Administration (NHTSA) to tell us how unsafe the roads are. It only takes a few seconds of inattention to cause an accident and Mobileye has developed a way to help reduce roadway collisions and make driving safer for everyone. 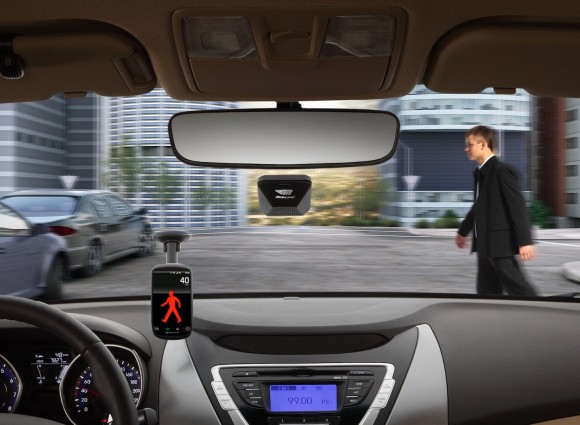 The Mobileye can alert you to imminent collisions and rear-end collisions all by the use of a smart camera, proprietary algorithms, and microprocessor working in conjunction with your smartphone.

“The introduction of Bluetooth technology and our intelligent Smartphone app allows drivers to be more in tune with their surroundings,” stated Isaac Litman, CEO, Mobileye Products. “The app also provides drive statistics including how many speed limit indications or headway collision notifications were presented if the user chooses the option on the display. This makes the driver more aware of his driving habits.”

Check out the video and specs below…

The Mobileye 5-Series will work with the majority of cars, trucks, and other vehicles on the road and it has been incorporated into many automotive brands like BMW, General Motors, Chrysler, Volvo, Hyundai and Ford already.

The Lanmodo Vast Pro is an affordable and high-end Dual 1080P Dash Camera System that features 1080p video resolution with Night Vision mode, Dual Recording with 45º front-view and 170º rear-view angles, up to 984 ft. of recording distance, and up to 128 GB of storage capacity. All that makes the Lanmodo Vast Pro Night Vision Dash Cam System one of the safest and most reliable ways of video recording any potential road incidents that you might face in the future. With it, you can have legitimate high-resolution video evidence that you can present at any time to ultimately protect yourself from any unwanted expenses related to road incidents that involve your vehicle.
Read more
Gadget News