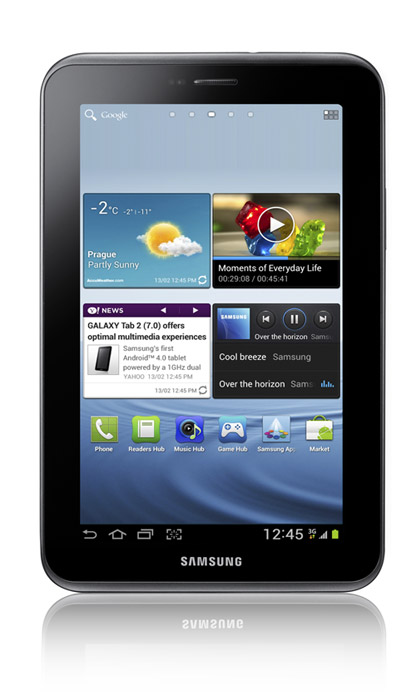 Samsung has added a new tablet to its lineup, right before the 2012 Mobile World Congress.  The Samsung Galaxy Tab 2 is a new 7-inch tablet similar in size to the original Galaxy Tab.  It runs Google’s latest version of Android, however, and features a lot of improvements compared to Samsung’s first tablet.

Highlights include a 1GHz dual-core processor, 1GB of RAM, a 3-megapixel camera, a VGA front-facing camera, a 4,000 mAh battery and either 16GB or 32GB of internal storage. Samsung has also included the latest version of its TouchWiz UI on top of Android 4.0, adding a unique twist to Google’s latest OS.

Pricing and availability for the United States have not yet been revealed, but the tablet will initially launch next month in Sweden, Finland, Norway and Denmark among other markets.  Samsung has confirmed the tablet will first release in UK in March.

Here is the official pricing and availability for the Scandinavian countries. Expected in March, the tablet will sell in both Wi-Fi-only and Wi-Fi + 3G versions.