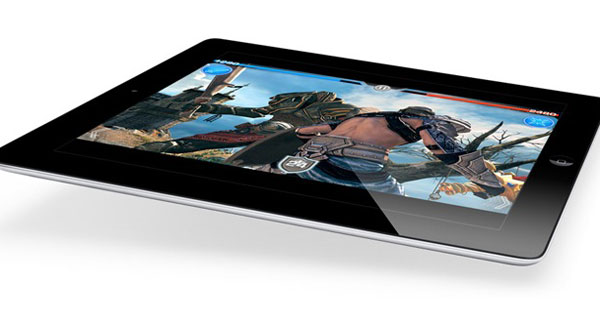 The new iPad is here.  This is the next generation of Apple’s iOS tablet,  and it’s pretty cool.  As was rumored, it’s sporting a Retina display, potentially making this the most pixel-packed tablet around. The 9.7-inch screen houses 3.1 million pixels in a 2048 x 1536 arrangement , or about 264 pixels per inch.  That’s high-definition at its peak.   It’s not just a higher resolution though, the screen also has improved color saturation, an A5X processor and quad-core graphics chip delivering four times the performance of a Tegra 3.

There’s also a new iSight five-megapixel camera with a backside five-element-lens illuminated sensor, capable of capturing 1080p video.  The keyboard has a brand new dictation key that lets you speak instead of type.  The new software inside will also let you use the slate as a portable WiFi hotspot, and the iPad 3 has the ability to recognize some bezel gestures. 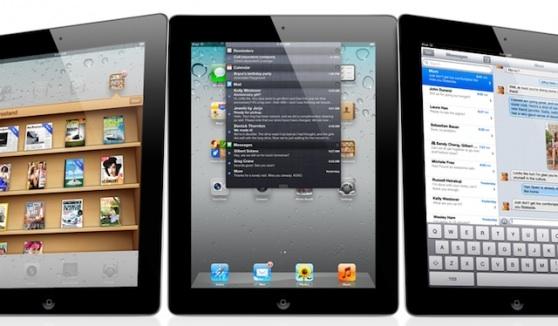 Perhaps most exciting though, is the new connectivity options including LTE.  The new iPad has 21Mbps HSPA+, and an LTE radio capable of pulling down 73Mbps on both Verizon and AT&T.  Apple says the new iPad can get 10-hours of battery life, despite its thinner 9.4mm “thinness”.  The company did increase the weight a little bit at 1.4lbs.

The new iPad will be available March 16th, starting at $499 for the 16GB WiFi model and scaling up to $829 for the 64GB version with 4G.  Pre-orders start today in the US, Canada, UK, France, Germany, Switzerland, Japan, Hong Kong, Singapore and Australia, with much of the rest of the globe to follow on March 23rd.

Check out the video and full press release….

“The new iPad redefines the category Apple created less than two years ago, delivering the most amazing experience people have ever had with technology,” said Philip Schiller, Apple’s senior vice president of Worldwide Marketing. “The new iPad now has the highest resolution display ever seen on a mobile device with 3.1 million pixels, delivering razor sharp text and unbelievable detail in photos and videos.”

The new iPad’s Retina display delivers four times the number of pixels of iPad 2, so dense that the human eye is unable to distinguish individual pixels when held at a normal distance, making web pages, text, images and video look incredibly sharp and realistic. The 3.1 million pixels in the Retina display are more than one million more pixels than an HD TV, and with 44 percent increased color saturation the new iPad displays colors that are unbelievably richer, deeper and more vivid. Movies are now capable of playing at full 1080p HD-resolution, delivering an incomparable viewing experience on a mobile device.

The powerful new A5X chip with quad-core graphics was specifically designed by Apple to deliver a fast, responsive user experience while supporting the incredible Retina display. With double the graphics performance of the A5 chip, the A5X provides a superb balance between performance and power efficiency so users can enjoy all the benefits of the stunning new display while experiencing a smooth Multi-Touch™ interface, immersive gameplay, incredible visual depth and all-day battery life that iPad is known for delivering.

The 5 megapixel iSight camera features advanced optics for taking stunning pictures and recording full HD video. Backside illumination allows you to take great photos in low-light conditions and a new video image stabilization feature removes the bumps and shakes typically seen when filming with a hand-held device. Images can be enjoyed on the large Retina display, then edited, enhanced and easily shared with friends and family using the built-in Photos app on iPad.

iPad Wi-Fi + 4G with built-in next generation 4G LTE has the most comprehensive support for fast networks worldwide including HSPA+ and DC-HSDPA, and now both CDMA and GSM iPad users have the ability to easily roam internationally. The world-ready iPad delivers blazing download and upload speeds so web pages load incredibly quickly and email with large attachments can be sent and received easily. Personal Hotspot can be used to share the fast network connection on your iPad with up to 5 other devices using Wi-Fi, Bluetooth or USB**.

With iOS 5.1, the latest update to the world’s most advanced mobile operating system, the new iPad has a number of new features and enhancements including: a redesigned Camera app with video stabilization technology; the ability to delete photos from Photo Stream; support for dictation in English, French, German and Japanese; and Personal Hotspot. iOS 5.1 also works seamlessly with iCloud®, a breakthrough set of free cloud services including iTunes® in the Cloud, Photo Stream and Documents in the Cloud, that works seamlessly with your iPhone®, iPad, iPod touch®, Mac® or PC to automatically and wirelessly store your content and push it to your devices. When content changes on one of your devices, your other devices are updated automatically.

The new iPad also supports dictation, another amazing way to get things done just using your voice. Instead of typing, tap the microphone icon on the keyboard, then say what you want to say and the new iPad listens. Tap done, and iPad converts your words into text. You can use dictation to write messages, take notes, search the web and more. Dictation also works with third-party apps, so you can update your Facebook status, tweet, or write Instagram captions.

Apple also introduced the iPhoto® app, along with major updates to iMovie® and GarageBand®, completing its suite of iLife® apps for iOS. iLife and the iWork® apps, Pages®, Keynote® and Numbers®, have all been updated to take advantage of the new iPad Retina display. iPhoto includes breakthrough Multi-Touch features so you can use simple gestures to sort through hundreds of photos and find your best shots, enhance and retouch your images using fingertip brushes and share stunning photo journals with iCloud. iMovie now gives you the ability to create amazing Hollywood-style trailers as you record HD video, and GarageBand introduces Jam Session, an innovative and fun new feature that allows a group of friends to wirelessly connect to play instruments and record music together live on their iOS devices.

iPad runs almost all of the over 585,000 apps available on the App Store™, including more than 200,000 native iPad apps, from a wide range of categories, including books, games, business, news, sports, health, reference and travel. The iTunes Store® puts the world’s most popular online music, TV and movie store at your fingertips with a catalog of over 20 million songs, over 90,000 TV episodes and over 15,000 movies. The new iBooks® 2 app for iPad lets users experience an entirely new kind of ebook that’s dynamic, engaging and truly interactive. iBooks created with Apple’s new iBooks Author offer gorgeous, fullscreen ebooks with interactive animations, diagrams, photos, videos, unrivaled navigation and much more.

Apple designs Macs, the best personal computers in the world, along with OS X, iLife, iWork and professional software. Apple leads the digital music revolution with its iPods and iTunes online store. Apple has reinvented the mobile phone with its revolutionary iPhone and App Store, and is defining the future of mobile media and computing devices with iPad.

The Ultimate Guide to CBD Tinctures