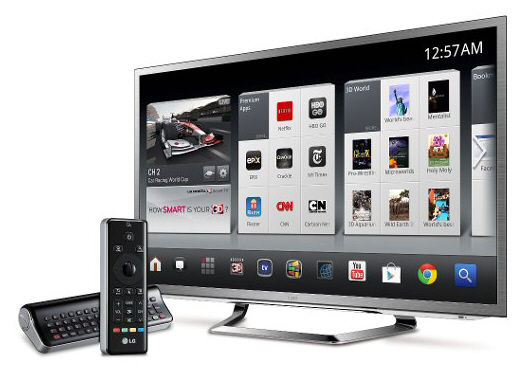 During the E3 conference in Los Angeles this June, OnLive, Inc. displayed its cloud-based gaming service on the new LG G2 with Google TV. The company first announced bringing OnLive Viewer to Google TV at CES last January, and teased about console-quality gaming features in the future.

On Tuesday, OnLive founder and CEO Steve Perlman unveiled the development, saying, “It’s always been our mission to make top-quality gaming accessible to everyone, everywhere.”

LG’s G2 series of smart TVs are powered by the L9 dual-core chipset, which also features a quad-core GPU to handle the user interface, 3D capabilities, and console-level gaming on 47- or 55-inch screens. OnLive gaming support is further bolstered by the inclusion of a QWERTY keyboard and voice and motion commands. Gamers can connect with each other via voice chat, Facebook integration, and the OnLive MultiView spectating system, allowing games to be broadcast to large audiences.

Check out the video review from CNET:

Previews of the OnLive LG TV experience will be shown publicly for the first time at OnLive Booth #535, South Hall at the Electronic Entertainment Expo from June 5-7 in Los Angeles. Select 3D games, using the popular LG CINEMA 3D glasses, are planned for a future software update.

With just a few taps of the Universal OnLive Wireless Controller or any compatible game controller, LG G2 TV owners will be able to jump in and play OnLive’s growing library of hundreds of top-tier, console-class video games on-demand. Instant demos are available for nearly every game—from eagerly anticipated indie titles like Ravaged to hot blockbusters such as the upcoming Darksiders® II—so players can experience up to 30 minutes of each game free before deciding what to buy, and then continue playing where the demo left off.

Games can be purchased a la carte, or players can subscribe to OnLive’s revolutionary PlayPack subscription service for unlimited on-demand play of more than 220 games, with more titles added weekly. When players are away from their OnLive LG TV, all of their OnLive games are available—with full game saves and achievements—on almost any PC or Mac®, tablet or smart phone wherever there is broadband, whether in a different room in the house, or in a different country in the world.

In addition to instant-action gameplay, an OnLive Game Service account enables users to watch millions of gamers from around the world play live in the massive spectating Arena, voice chat with other players and spectators, capture Brag Clip videos of their best and worst gameplay and share their gaming exploits with friends on Facebook.

Exclusive to OnLive, users can now even spectate and chat with friends and teammates in OnLive’s new MultiView mode while continuing to play their own game, adding an engaging new social dimension to OnLive gaming. With MultiView, gamers will not only be able to take co-operative tactics to all-new levels by virtually looking over their teammates’ shoulders as they play, but also keep tabs on friends in any single player or multiplayer game in play on the service.

The LG G2 Series, which combines the power of the Google TV platform with the speed of LG’s new L9 dual-core chipset and a user-friendly interface, is expected be the first LG Smart TV with Google TV model to make OnLive on-demand gameplay an integral part of the consumer experience. The first LG G2 TV, featuring Full HD 3D and the OnLive Game Service pre-installed, is anticipated in a future software update. To preview the experience firsthand, come by OnLive Booth #535, South Hall at the Electronic Entertainment Expo from June 5-7 in Los Angeles. To find out more about OnLive, visit www.onlive.com or www.onlive.co.uk.

The CouchCoaster is a very flexible and ultra-adjustable silicone drink holder that's designed in a curved shape to perfectly fit over any type of sofa arms, whether they're flat, curved wide or narrow, while also supporting almost any drink size.
Read more
Home Gadgets

The Koble Zain Smart Side Table is a minimalist and ultra-modern smart table that features Wireless Charging while also coming equipped with built-in Bluetooth speakers and a 40W subwoofer.
Read more
Home Gadgets

The SeatZac E-ZY is a lightweight and ultra-durable self-inflatable chair that's equipped with the "MR EZY", an integrated patented air pump that features a built-in 2600 mAh lithium powerbank for auto-inflation and USB device charging.
Read more

Logitech decided to make a keyboard that works with EVERYTHING!...and they call it the K480.  Without needing any keyboard drivers or software, the K480...
Read more