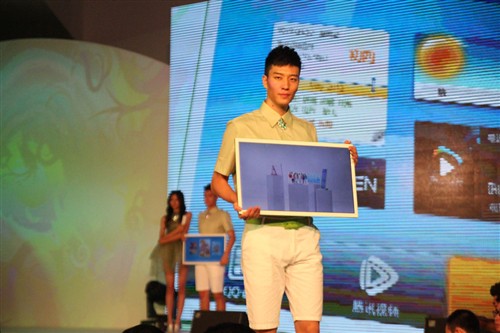 Chinese Tencent and TCL Multimedia have just announced Ice Screen, a jointly developed 26-inch smart TV with a 1,366 x 768 display that allows users to browse the web, access videos, music and games through QQ services.  The Android-powered television houses a dual-core Cortex A9 1GHz processor, a Mali 400 GPU, 4GB of RAM and support for a memory card of up to 32GB in size. 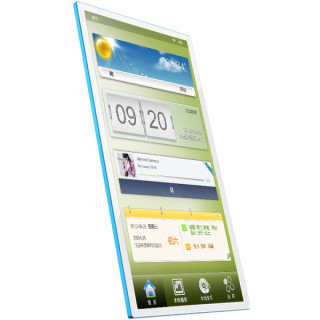 An IR remote and an app for devices sporting version 2.2 or higher of Google’s OS can be used to control the tube, which can sit horizontally or vertically in its stand.  Connectivity-wise, the panel packs Wi-Fi, a pair of USB ports, HDMI and a 3.5mm headphone jack. You can spend ¥1,999 (roughly $315) for an online pre-order before its September 3rd launch.

iCE SCREEN is a specialty smart cloud product which was developed to cater to customers’ latest needs. Its screen is bigger than that of handsets and tablets, offering stunning visual effects on a large screen, while providing portability that is not found in traditional TV sets. Meanwhile, it provides the same functions, including communications, social networking and Internet surfing, as found on handsets and computers. It has fashionable design and offers fast, convenient and comfortable use. Mr. Li Dongsheng, Chairman of TCL Multimedia, said, “TCL and Tencent are jointly launching iCE SCREEN to create an innovative new form of 3C product, the first of its kind in the world, all in an effort to meet this new demand from consumers and to offer consumers and their families more trendy, enjoyable and cutting-edge experiences. As a new form of consumer electronics product with considerable market potential, iCE SCREEN will build a massive differentiated market much like the markets for tablet computers and smartphones. In the meantime, it is expected to drive the joint development of the relevant industries and to open up a new frontier in the global consumer electronics industry.”

As TCL’s content provider partner, Tencent brings to the iCE SCREEN a wide array of QQ services and popular applications such as QQ Video, QQ Album, QQ Music, QQ Messenger and QQ Game. Users can enjoy different forms of exciting mobile, large screen cloud applications such as online communications, leisure and entertainment. In addition, iCE SCREEN also comes with a rotary hanger which allows users to easily switch between horizontal and vertical positions. When in a vertical position, users can listen to music while viewing an automatic slide show, which combine to create a striking visual effect. When watching the online videos like those offered by Tencent QQ, the videos run smoothly on the high quality large screen with the exclusive leading “pre-installed back platform” technology, making the iCE SCREEN suitable for the enjoyment of a number of people at the same time. Moreover, it separates itself from the other consumer electronic products on the market which are available in a very limited range of colours, breaking the tradition of black television sets to offer consumers four colour choices, namely sapphire blue, fantasy pink, champagne gold and green tea green. This revolutionary new product overturns the conventional thinking about what smart cloud end-products and screens should be, marking the first major breakthrough in the systematic innovation of China’s enterprises.

TCL and Tencent have worked together numerous times in pushing innovation in the area of smart cloud TVs. This time, the cooperation between the two industry leaders integrates the core technologies and advantageous resources of the two companies to ensure the best combination of hardware and software in the iCE SCREEN. Mr. Ma Huateng, CEO of Tencent, said, “Cooperation across industries can facilitate the further integration of industry resources and push forward cooperation and innovation between companies in different industries. Tencent has committed itself to adapting internet services for more application environments to facilitate easy access. This is our first attempt to adapt the services for the home application environment. We aim to provide high quality internet services to hardware manufacturers in different areas, so as to fulfil the users’ desire to quickly switch between different applications.”
Mr. Li Dongsheng, Chairman of TCL Multimedia, said, “iCE SCREEN is also an important milestone for TCL to achieve its full cloud strategies. This April, TCL Multimedia took the lead to announce its full cloud strategies as the cloud era in China’s consumer electronics industry approaches. Launching the iCE SCREEN represents another strategic deployment and innovative breakthrough in smart cloud products following the successful introduction of TCL Multimedia’s 3D smart cloud TVs.”

iCE SCREEEN, the world’s first smart screen jointly launched by TCL and Tencent, expands on the forms of existing smart cloud products and will represent a revolution in smart cloud life. Besides working together on product innovation, TCL and Tencent will launch the first batch of pre-sales of iCE SCREEN through the official TCL online store and QQ’s online store at 00:00 a.m., August 23. This innovation in sharing sales channels and business models is another highlight of the partnership between TCL and Tencent, in addition to being the first time that the concept of “one-stop online-life” was extended to the brand new smart cloud product in the Internet industry. This innovative cross-industry integration model has also set a benchmark in innovation in the consumer electronics and Internet industries.