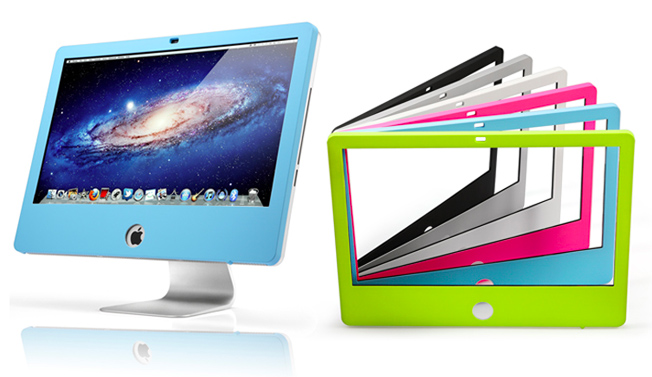 Apple has always believed that touchscreen iMacs and MacBooks wouldn’t work as well as horizontal multi-touch trackpads.  But China-based TMDTouch has decided to do it anyway with a $199 USB-powered cover that converts any 21.5-inch iMac into a touchscreen AIO PC in 10 seconds.

TMDTouch’s device is called the Zorro Macsk, and requires little installation beyond attaching it to an iMac’s display and plugging it into a USB port. TMDTouch says the Zorro Macsk brings full touchscreen and trackpad functions to the iMac by using infrared technology to track touch input.

TMDTouch is not the first company to try to create a new way to interact with Macs; the Leap Motion controller is also an alternative to the mouse and trackpad that will become available later this year.

Touchscreen iMac? It has been a hot topic for years. But Apple is firmly on board with touchscreen and multitouch to drive the interface of the devices like iPhone, iPod Touch and iPad, and it hasn’t done the same for the iMac. Now it’s time for Change. TMDTouch, a Chinese based company,excitedly announce that a touchscreen–Zorro Macsk designed for iMac has been released. You can add touch functionality to your iMac within 10 seconds.

This accessory is called Zorro Macsk and is available on Amazon USA for $199 with various colors like pink, silver and black. It has such an awkward name but such amazing features. It enables your iMac with touch functionality in 10 seconds. It integrates the gesture touch function of Apple trackpad and you can easily switch screens, hide tasks, invoke tasks and so on. Moreover, easy installation and precise touch capabilities greatly attract Apple Fans. Now, I would like to introduce this product in details.

The Zorro Macsk doesn’t require any additional software to run. After attaching it to your iMac, and pluging a USB cable to the back of the iMac, you get a Touchscreen iMac. Since it uses infrared technology to sense touch input, users can use input such as natural finger gestures or stylus to swipe, scroll, click, zoom, and more. Now there are six colors available. This accessory not only decorates your iMac but also protects your iMac panel from scratches.

As you can see,  Zorro Macsk looks like a natural part of iMac. It’s hard to believe that this product is from a Chinese company.  Actually, it’s not only a “Made in China” product, but also a “Designed in China” product of the century.

Now you should think about the uses of this amazing product. How will you make use of the Zorro Macsk? Conference Demonstration? IOS games? Easier operation for children and old people? No matter what your answer is, it is worth your money for its amazing function.

Now let’s view this demonstration video taken by the TMDTouch. Perhaps you can’t stand the Chinese-Accented English, but the fantastic features of Zorro Macsk will catch your attention.

Here is the video link: http://www.youtube.com/watch?v=gLB8Hh2wg_U&feature=g-all-u

At present, a few Zorro Macsk are available on Amazon: http://www.amazon.com/shops/lumiaview. If you buy it now, TMDTouch will offer you a free iMac protective film. Some apple fans from  North American and Europe have started to use this product. I have learnd that the TMDTouch official site crushed because of too many visitors on 4th, July, when the product was officially released. We can see how popular it is. Now TMDTouch only released 21.5” model. And the manager privately told the techradar reporter that the 27” sample is available and the designers start testing process. It can be pre-ordered soon. I believe TMDTouch will bring more surprises. The Zorro Macsk is born to change the iMac history.

While everyone has their bodies biologically configured to work more or less in the same way, there are still lots of people that have...
Read more

HP webOS 2.0 coming to Pre, Pre Plus, Pixi, Pixi Plus in coming months

Asus Shows Us Future of Laptops with ScreenPad

Asus is looking to bring new technology to an aging laptop design by offering something new on its ZenBook Pro 15. It's called ScreenPad,...
Read more