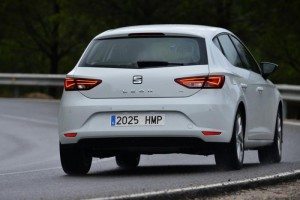 If you like the idea of a new VW Golf or an Audi A3 but fancy something a little less German, the new SEAT Leon could be right up your street.

Designed, developed and built at the firm’s factory in Martorell, just outside Barcelona, the Leon injects a little Spanish flair into theVolkswagen Group’s new modular MQB platform that underpins all three of these cars.

For the five-door Leon, SEAT has actually bucked the trend and made it 52mm shorter than the car it replaces. However, due to the fact that the Leon is now a more sensible hatchback shape than its predecessor, with its wheels pushed out further towards the car’s extremities, there’s actually a 58mm longer wheelbase. This gives extra room in the cabin, and a 380-litre boot – 39 litres more than before.

In the metal, the Leon is a sharp looking thing, not least because it uses the latest iteration of SEAT’s pointy ‘Arrow Head’ design language, which adds plenty of angles and creases to the car’s bodywork.

The Leon features a relatively high shoulder line and narrow glazed area, which helps to give it a sporty look. But the new car has come over all sensible, too, as the rear door handles are now on the door panel rather than hidden in the C-pillar.

Combine the cut-down overhangs with a wider stance, and the Leon cuts a sporty, contemporary figure – particularly when you compare it to the car it replaces. It’s a more overt style statement than either the Golf or the A3, too, especially if you opt for the all-LED headlights (a £995 option that includes smart LED tail-lights, too), which are a first in the C-segment.

One of the major criticisms of the old car was its plasticky interior. This time around there’s been a big focus on improving the quality of the materials used throughout. The dash is topped with a thick slab of nice, squashy plastic, and the dials look like they were taken almost unchanged from the new A3.

The area around the touchscreen that’s standard on all models is trimmed with just the right amount of chrome and gloss black plastic as to not show up too much dust or greasy fingerprints.

The steering wheel has a relatively thin rim and is covered in decent leather, while the indicator stalks all move with a precise, damped thunk. The air conditioning controls are solid, too, but the area around the controls and between the seats does feature rather harder, scratchier plastic.

Space inside is decent. The front seats are set relatively low, and while the windscreen is quite steeply raked, visibility out of the front screen and around the slim A-pillars is good. The rear door openings are nice and big, and leg and headroom for rear seat passengers is impressive. 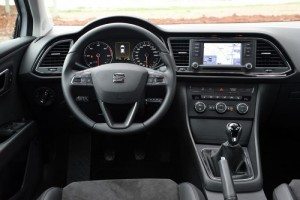 The upswept C-pillar design does mean rear three-quarter visibility suffers, though, and while the boot is nice and deep, the loading lip is relatively high.

We drove the 1.6-litre TDI, which is expected to be the biggest seller in the UK. The new Leon is 90kg lighter than its predecessor, and it certainly feels like quite a lithe and agile car, particularly through its steering wheel which is light and precise.

The manual gearchange is good, too, and the engine’s 250Nm of torque means that you don’t miss a sixth gear too much, although the engine can get quite gruff at higher revs. However, you do need to keep the turbo on boost, as low revs can leave you with very sluggish acceleration.

It’s certainly not a slow car, but the engine’s at its best in the middle of the rev range. This also maximises efficiency which, at a claimed 70-plus mpg and tax-free 99g/km CO2 emissions, is a real bonus.

A seven-speed DSG version is an option, and although this offers two extra ratios, it can make the engine roar away quite hard when climbing hills on the motorway.

Refinement is impressive, and while the ride is on the firm side, with a tendency to make the car fidget a little over bumps, the new Leon is a very comfortable car to drive.

Walmart to carry iPad by Christmas