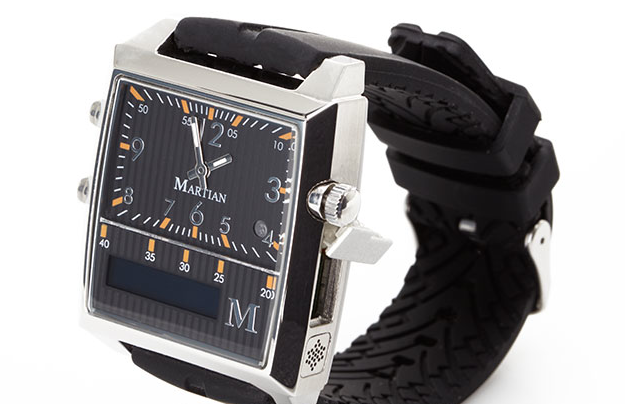 Recently, the smart watch has picked up more than a little steam. In the efforts to one-up the competition we have the Martian Watch, an analog piece that has a speaker/microphone intended for voice commands and calls(!) and a LED for alerts. At $299 the watch has a different set of bells and whistles than it’s competitors. There is quite a Michael Knight flavor but all the same it maintains a touch of class.

The Martian Watch is available in three models: Passport, Victory and G2G. Actually the Martian looks like a regular ‘ol watch. With it’s analog face (hour and minute hands) there wont be much gawking until you start to put it into action. The status indicator sits next to the 4, and a LED display sits below the indicator. Unless you’re  using the watch’s features, these remain dark. The right side of the watch contains the crown, a microphone and a microUSB port, which sits quite snug under a cover. There is a speaker on the bottom, and two buttons are on the left side.

The audio setup for the Martian Watch is just a matter of pairing it with your smartphone. Hold down the top button for a few seconds, and the status light begins to flash. The Martian Watch is then set up on your phone where you just need to tap its name to establish a connection. After that, there is a code that is returned but you only need to tap the name to enable the connection.

Now you are able to receive incoming calls, use your phone’s voice functionality, all by means of the speaker and microphone. Alerts on the watch require the Martian Watch Android app, which you can get as a free download from the Google Play store. Incoming calls display the number on the LED screen and the watch vibrates. Gesture control is cool if you want to reject the call. Just shake or wiggle your wrist and the ringing ceases sending the caller directly to voicemail. Accept the call by simply pressing the top button and start talking. To terminate the call, just press the top button a second time.

Audio quality on both ends is wonderful. Incoming sound is clearer than any smartphone or smart watch you’ll find out there. On the other end the audio is just as impressive. No other watches can match this call quality here.

The Martian Watch’s voice command is as good as the voice command on your phone. Also there is no iOS app but it still works with Siri on an iPhone 5. Press the top button and ask Siri to perform a search, record notes or find a restaurant. Unfortunately looking at the screen for results kind of negates the function.

With the Android app, alerts are sent directly to the watch. The watch buzzes and then displays the text on-screen. It also reads text-to-speech if you have this enabled. SMS texts appear along with the sender information and the first few sentences of the messages. Connecting the Martian Watch app to your Facebook profile sends alerts for Facebook messages, but not everything. Twitter only passes on mentions. Email alerts are disingenuous, only showing you how many unread messages are in your inbox. To add to that it only works with gmail and no other accounts.

The leash feature causes the Martian Watch to buzz when you are too far away from your phone. This works fine, but the alert only comes after the Bluetooth connection has been lost and the distance where the alarm goes off cannot be set.

The Lenovo Multimedia Remote has 2.4GHz Wireless Keyboard with a trackball combo. It's designed to be used with your palm, and as a result...
Read more
Media Gadgets

Klipsch has announced three new headphones, the Image One, S5i and S3. The One is an over the ear can style headphone, a first...
Read more
New Gadgets

If Andre Agassi can play with it, so can you. The Radical Oversize continues their impressive Radical line with the new YOUTEK IG Radical...
Read more