The Cinder Precision Grill ($500) is a counter-top grill designed primarily for perfect, evenly-cooked, precise-temperature meat. Somewhat like a sous vide device, the Bluetooth-connected Cinder lets you dial in an exact cooking temperature using 2 non-stick plates that heat to a perfect temperature. Additionally, you can sear your meat after it’s cooked. Currently and IndieGoGo campaign, the Cinder Precision Grill is selling like gang-busters. 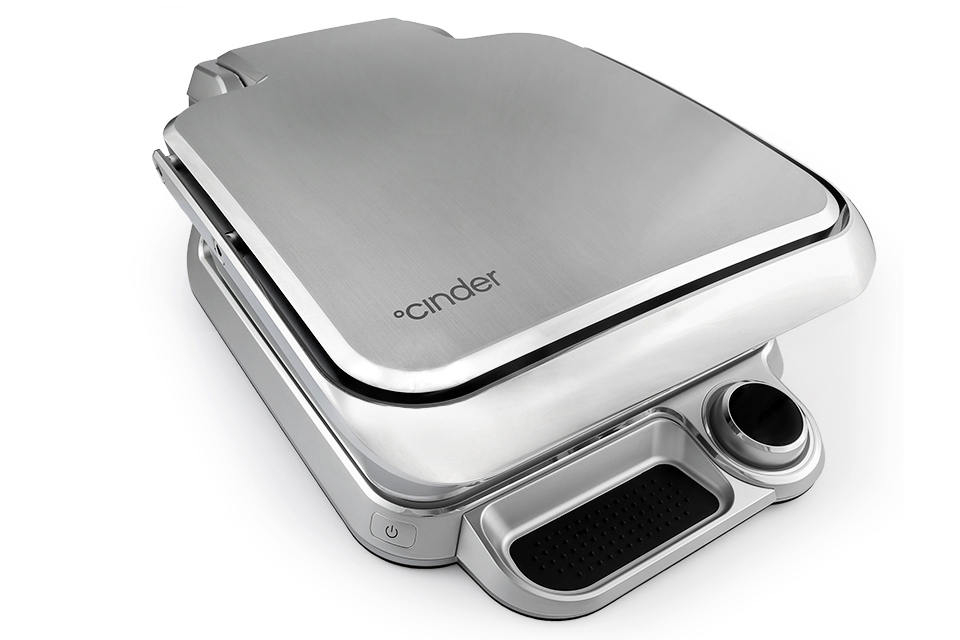 The Cinder Precision Grill has a fairly small footprint, so it doesn’t take up a ton of space, and the heavy lid will make sure your meat is cooking at full capacity. Resembling sort of a panini press, the Cinder Precision Grill measures 13″ x 17″ x 7″, and on the inside, their are 2 removable ceramic-coated aluminum plates. The lid adjusts to the thickness of the food that you put between the two plates. A grease tray surrounds the bottom plate and leads to a drip tray built into the Cinder’s base.

The large knob at the bottom front of the base essentially represents the control panel. You use this knob to manually adjust the temperature, but you can also control the temp with the Cinder’s app. The Cinder’s plates are easy to remove and clean by hand, but they’re not dishwasher-safe.

The Cinder is easy to set up and use. After the app is downloaded, you simply turn on the machine and pair the two via Bluetooth. You can now use the app to set your cooking temperature. The food guide makes it easier, allowing you to choose from a list of meats, fish and vegetables, select how you want that item cooked and send the correct temperature from the app to the Cinder. You can also select from the app if the food you are cooking is frozen. If selected, the Cinder will add a longer cooking time.

Sensors inside the grill measure the thickness of your dish to figure out how long it will take to cook it, and the app gives you an estimate of when it will be done. The app has several food items to select from, and more is expected to be added by the company, but clearly the Cinder’s sweet spot is meat. During our test, we cooked several cuts of meat, and the Cinder performed as promised. We even cranked the Cinder up to sear, and once again….flawless. The finished product never tasted overcooked.

The Cinder is awesome at cooking meat, and doesn’t do a have bad job with other foods like paninis, grilled cheese, fish, chicken and even vegetables. This countertop grill, while a tad pricey, is a wonderful addition to your kitchen appliance arsenal.  If you want high-quality cooking, get the Cinder Precision Grill.  You can purchase it here.

The AirHood Wireless is a portable cooking range hood that provides a reliable cooking fumes extraction method, boasting an innovative Dual Filter Technology as it integrates a detachable oil filter and a replaceable activated charcoal filter, along with a powerful motor and fan, as well as a built-in air diffuser at the back, all while also featuring an easy maintenance, a quiet operation, 3 Speed Settings, and up to 480 minutes of battery life, plus an attachable Base Boost accessory that allows you to increase the device's height so that it can clear cooking fumes more effectively. All in all, this is a very neat portable cooking range hood unit, as it offers anyone that currently doesn't have an exhaust hood installed in their kitchen a reliable and effective way to filter out any potential cooking fumes / steam that come from their daily cooking.
Read more
Kitchen Gadgets

The Newair Shadow Series Wine Cooler Refrigerator is a freestanding beverage fridge that features enough capacity to store up to 12 bottles of any type of wine and 39 cans of beer or soda, coming equipped with frameless mirrored glass doors integrated with a double pane glass that blocks harmful UV rays to protect your wine’s flavor and aroma, 10 removable beverage racks, a built-in soft Blue LED light that illuminates labels without creating a harmful hotspot, a built-in fan, and a powerful and quiet compressor cooling system that makes it capable of keeping wine properly stored between 37°F to 64°F, plus Dual Temperature Zones, along with separate built-in control panels integrated at the top of each of its glass doors that let you configure the temperature for each zone. All in all, the Newair Shadow Series is a really great choice of a wine cooler refrigerator to go with, as with it, you can easily keep any type of wine properly stored in order to keep all of its qualities well-preserved, while also giving you the possibility to store and refrigerate up to 39 cans of your favorite beers or sodas at the side. The unit is compact, easy to install, and also quite easy to operate.
Read more
Kitchen Gadgets

The Ecozy IM-BS260C is a portable countertop ice maker machine that can produce a batch of 9 bullet-shaped ice cubes in just 6 minutes, and up to 26 lbs. of ice every 24 hours, featuring a removable ice basket with 26 lbs. capacity, a 1.98 L / 2.1 Quarts water reservoir, the capability to produce its bullet-shaped ice cubes in Small or Large sizes, a low-noise operation at just 35dB, a built-in Control Panel with 2 Button Controls, an Ice-Full Sensor and a Low-Water Sensor that work based on advanced infrared sensor technology, and a Self-Cleaning function that deeply cleans the inside of the unit through water circulation. All in all, this portable countertop ice maker machine is perfect for anyone who enjoys drinking their beverages with a few ice cubes on a regular basis. Not only is it compact and portable, but it is actually capable of producing a large amount of nice bullet-shaped ice-cubes on a daily basis.
Read more
Kitchen Gadgets

The Whip-It! 1/2L Specialist Dispenser Variety Bundle is a professional culinary whipping set that comes with a 1/2L Stainless Steel dispenser, a 24-pack of aluminum N2O cream chargers that can provide approximately 20% more volume of whipped content, a premium Injector Tips Set that can be used for fillings and stuffings, a Funnel & Strainer Set that can be separated and utilized independently for a variety of culinary applications, a set of 3 Plastic Decorator Tips that can be used to decorate desserts or to get creative with drinks, and a Recipe Book. All in all, this professional culinary whipping set is great to prepare foods and beverages that specifically have filling / stuffing or whipped content, such as desserts, pastries with fillings, and toppings for different foods as well as for beverages, including unique coffee mixes, smoothies, and even cocktails!
Read more

Facebook launched customizable Avatars for users in the USA