So most of us know about the latest Tesla announcements, the Roadster and their new Semi rig, which stands to change the transportation industry. Now the company is planning on a new Tesla pickup truck, which looks rather space-age, but super-powerful and slick.

There has been news about the Tesla pickup before, but it was assumed it would take the form of a full-size model, like the Chevy or the Ford. The sketch confirms it will be significantly bigger than the Ford F-150. In fact, the truck will be able to haul a F-150 in its cargo bed. The Tesla Pickup Truck looks so big that it’s unlikely that it will compete with full-size pickups like the Silverado or the F-150.

“We created a pickup truck version of the Tesla semi. It’s a pickup truck that can carry a pickup truck. By the way, you will actually be able to drive that with a normal driver’s license,” said company co-founder and CEO Elon Musk during the presentation. His comments suggest the concept isn’t merely a wild design study sketched to gather applause during the event. It’s real. 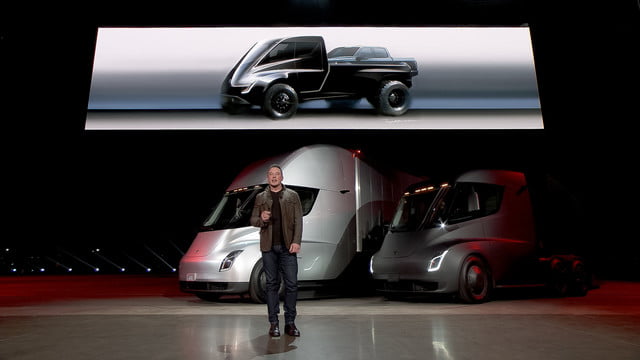 No details have been shared about what’s under the hood and beyond, or it’s range, performance and price, but judging by the sketches which Tesla released, it does bear a scary resemblance to Tesla’s recently announced Semi.

Tesla definitely has a busy schedule over the course of the next 3 years. Currently, it’s struggling to bring the Model 3, its first mass-market car, to market in sufficient numbers, and we know it’s busily developing a crossover named Model Y that will slot below the Model X. Transforming the semi and the Roadster from concept cars to production models will take a tremendous amount of effort. With that in mind, don’t expect the truck to make its debut for another 2-3 years.

With so many options available online, finding a reliable phone holder for your car can take some time. This article can help you make the right choice for your vehicle.
Read more
Car Gadget

The Wallbox Pulsar Plus 48A is a home electrical vehicle charger that works with all EVs, featuring adjustable power up to 48Amp (11.5kW), Smart Functionalities like Scheduled Charging and Locking/Unlocking, both Bluetooth and Wi-Fi Connectivity, In-App Controls, and Voice Assistant support to Alexa and Google Home. On top of that, this home electrical vehicle charger is also fairly easy to install, ultimately offering EV owners a compact EV charging solution with an incredibly small footprint that still packs a quick and powerful charging performance for any brand of electric vehicle. Best of all, via its Smartphone Companion App (the myWallbox App), drivers are also offered an easy and convenient way of controlling their Pulsar Plus 48A right from their smart devices. All and all, the Wallbox Pulsar Plus 48A is perfectly suited for everyday use at home.
Read more
Car Gadget

The Nextbase 522GW Dash Cam packs some ground-breaking features such as a built-in 140º Wide-Angle Polarising Lens for 1440p HD Video Recording, 10Hz GPS for Google Maps, Wi-Fi and BLE Connectivity, Intelligent Parking Mode, Emergency SOS Response and support to Alexa Voice Controls. Best of all, the set also comes with some neat accessories, including a Rear Window Camera, a Rear View Camera, and a Cabin View Camera. Whether you're out driving long distances for work purposes, traveling across the country to visit relatives or explore new places, or even just tailgating with friends and family,  this sleek Dash Cam is a must-have for protecting yourself on the road from any potential fender-bender that may or may not include someone else's vehicle. All and all, the Nextbase 522GW Dash Cam makes for a great “silent witness” for any driver, providing them with the ultimate protection on the road, no matter if they're already experienced behind the wheel or if they just recently started driving.
Read more