Sleep problems? Do you toss and turn, read for hours, or count sheep in the hopes of finally getting some quality ZZZZs? If so, perhaps it’s time to try sleeping with Somnox’s sleep robot. With this unique gadgets, you hug it, and you’ll feel the soft rise and fall of its body, mimicking someone’s breathing. This calming effect is supposed to lull you to sleep, as your own breathing begins to match the slower pace of the robot’s own, while soothing sounds help relax your mind.

The Somnox sleep robot is now available to buy in the U.S., Europe, and the U.K. Online at Somnox’s store it runs $600, and inside the box you get a removable fabric case for the robot, so it can be easily washed. If you want to hug-before-you-buy, visit a b8ta store in the U.S. to see the robot for yourself.

The Somnox Robot is comparable to hugging a kitten, although it’s solid, heavy, and has a soft fabric shell. It also doesn’t feel particularly big once you’re in bed with it despite its bulky look. It also has a speaker inside that plays various lullabies. The volume is low, even when maxed out, and having the music playing at all is an option.

An app configures the breathing patterns and the music, plus the length of time the sleep robot stays active during the night. It’s very basic, but connectivity is simple. It would be nice if there were some sleep tracking feature, and an alarm, but Somnox said they are working on both.

Currently, the robot’s functionality is basic, and firmly built around the unusual breathing action. Somnox says this is all based on scientifically proven techniques that reduce stress and promote good sleep. Members of the team were insomniacs, prompting the development of the sleep robot, so there’s genuine passion behind making it work effectively. 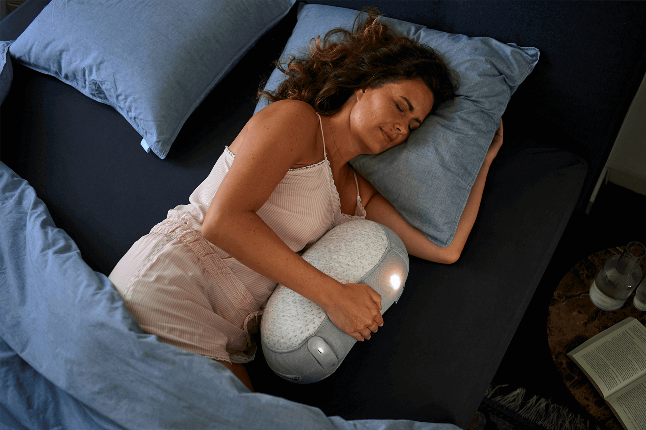 According to the company, the breathing action is very subtle, almost to the point where you can’t feel it. And the manufacturing process of the Somnox consists mainly of a 3D printed mold, and the final product may include controls made from fabric.

Somnox has launched to the market, and the Somnox sleep robot is now in production and shipping worldwide to consumers. It is available for purchase online at meetsomnox.com and in brick-and-mortar b8ta stores in the U.S.