The French drone maker Parrot has long been in the shadow of DJI, the successful Chinese drone maker, popular by its quadcopters, including the Mavic range or more advanced options, such as the Inspire 2. The U.S. Department of Defense has, however, selected Parrot as one of six companies to develop small and short-range reconnaissance aircrafts to be used by soldiers on the battlefield. The other companies that will be working on this project include Skydio, Altavian, Teal Drones, Vantage Robotics and Lumenier, all of which are based in the U.S.

The companies will share an $11 million budget to create prototypes of their own individual drones, providing the soldiers an effective way of securing situational awareness on the battlefield, beyond the line of sight. The contract’s guidelines state that the final drone design should be able to fly for 30 minutes on a single charge and have a range of up to 1.86 miles (3 km). The drones shouldn’t weigh more than three pounds, take less than two minutes to assemble, and fit inside a soldier’s average backpack.

The funds are certainly helpful in developing these drones, but Parrot already has an aircraft pretty much ready to go with its 2018 Anafi quadcopter. It offers 4K video and 21-megapixel stills, can fly for 25 minutes on a single charge, and has a range of more than 2 miles. It folds into a small case and weighs just 0.71 pounds. Parrot recently released a version incorporating a thermal-imaging camera, an impactful feature on the battlefield. 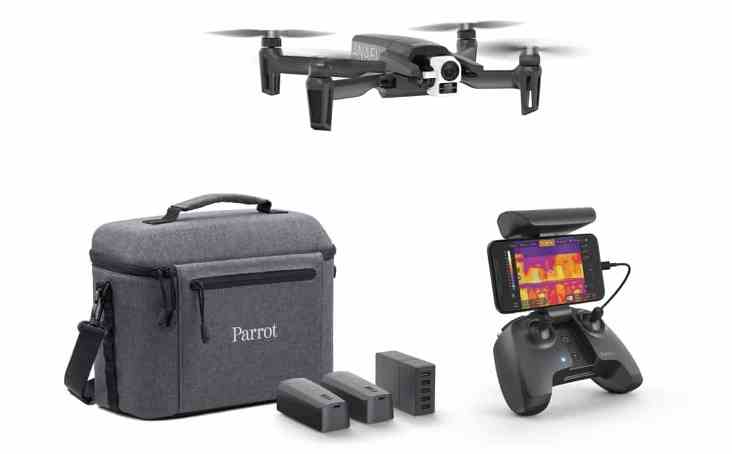 Henri Seydoux, founder and CEO of Parrot, commented about the contract: “The United States has always been a major market for the Parrot Group whether it is for our well-known consumer range or our advanced professional offering.” Seydoux said his company has been “at the forefront” of creating improved, easy to use, and reliable drones, stating that his team is looking forward to “focusing our advanced R&D on meeting the high standards set by the U.S. Army, to integrate drone efficiency in their day to day operations, and support the world leading army defense system.”

Regardless of DJI’s huge success in the global drone market, the company wasn’t  chosen to participate in this project, probably due to the increasing trade tensions between the U.S. and China, as well as security fears over the use of Chinese technology, as evidence by the U.S. government’s ongoing action against Chinese tech giants, such as Huawei.

The KidsConnect KC2 Phone features GPS, LBS, and Wi-Fi connectivity, working as an all-in-one 4G GPS Tracker Security Solution for real time tracking. Working together with its proprietary SECURE TRACKER App, which works specifically as the phone's dedicated and secure GPS Tracker App, this 4G GPS Tracker Phone brings parents several real-time In-App tracking features that are based on the phone's GPS, LBS and Wi-Fi connectivity options. In all honesty, all of the App's features (both tracking and non-tracking features) are extremely useful, and ultimately bring parents with great peace of mind. Overall, both the phone itself (which will be used by kids) as well as its proprietary App (for parents) are fairly easy to use, and when used together, parents are directly connected to their kids's KidsConnect KC2 Phone, thus providing them with real-time tracking for the unit, as well as their children. All that makes the KidsConnect KC2 Phone the perfect All-in-One 4G GPS Tracker Security Solution for concerned parents with young children, thus giving parents the best possible way of obtaining peace of mind while their kids are away from home.
Read more
Miscellaneous Gadgets

The Secured Sphere RFID Shield Card is a powerful data-privacy-focused RFID Blocking Card that can be used to protect your wallet's credit cards and their digitally stored personal data. This is the perfect RFID Blocking Card for any consumers that are looking to take more control over their personal financial security, as it provides users with a holistic protection from skimming theft by simply disabling the RFID functionality of all cards within a 3.14 inches (8 cm) radius.
Read more
Security System

Singapore startup Igloohome recently released their Smart Padlock, a locking system you can unlock with either a PIN or via an app using Bluetooth....
Read more