Anyone who wants great quality headphones, wires or not, is probably willing to spend a considerable amount of money to get a pair. Here’s some great news: You don’t have to drop a ridiculous amount of cash to get a great pair of headphones.

Sennheiser, the well-known audio company, has had a major success in the audio products industry, but the company’s HD 650, considered one of the best audiophile headphones of its kind, stands apart.

More than a decade after its release, the HD 650 has received a fresh look, and they might be better than ever. This second version of the HD 650 was brought to life in the Massdrop x Sennheiser HD 6XX, resulting from a collaboration between Sennheiser and Massdrop, the “audiophile” e-commerce company.

When the HD 650 released in 2003, the headphones cost a notable $500-plus. And just because the price has dropped hard for the 6XX version (and the original HD 650 on most websites), that doesn’t mean potential buyers won’t get a real taste of audiophile luxury.

The box it comes in is made of a sturdy and thick black cardboard, displaying a black-gloss Sennheiser logo on the lid. Inside it, you’ll find a bed of hard foam, where your headphones rest comfortably. The open-back earpieces are attached to an adjustable hinge. Its thick and soft earpads are super comfortable when worn. The Sennheiser logo atop the headband will remind you of the high-quality sound within.

After examination, some moderate upgrades driven by Massdrop can be found. The most notable design change seen right from the start is the color – having dropped the HD 650’s charcoal gray for an almost pitch black HD 6XX, with a faint shade of midnight blue lines, cast in along the borders. The original “HD 650” badge above the earpieces have been replaced with two “HD 6XX” badge, matched by a Massdrop logo on the interior. The removable cable now terminates with a 3.5mm jack rather than a quarter inch one. There’s also an included quarter-inch attachment, making you able to pair the 6XX with many devices. 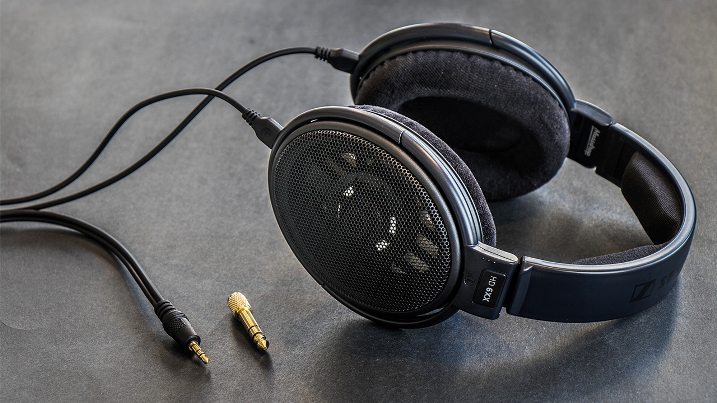 The cable length has been shortened from the original 10 feet to almost half, giving it a tighter 6 feet. Weighing 9.2 ounces, the 6XX have some serious clamping force, but that’s relieved by the soft padding, making it easy to wear, despite the fact that it might make your hair a bit untidy.

Nothing has changed about the 650’s sound signature – the same mid-range great quality, the amazingly warm and rigid bass, and the ultra-detailed treble are all present and accounted for here. The open-back design perfectly distributes the sound waves, letting the instrument sounds easily travel from ear to ear. The HD 6XX’s ability for detail includes all the instrumental textures and timbres an audiophile longs for. It offers a massive frequency response of a claimed 10Hz-41khz, being only imaginable for headphones significantly below $500, resulting in some of the best sound dynamic drivers can bring to the table at this price.

Many people have owned the HD 650 for a decade-plus, and given that they have replaceable cables and are very well made, the new HD 6XX should last you for a very long time, if treated right. With Massdrop (or just “Drop”) redesigning some key ergonomic traits for better usability and with the super low price of just $220, this accessible deal is one that you surely don’t want to miss. The HD 6XX comes with a two-year warranty on parts and workmanship that’s backed by Sennheiser.

These are, hands down, the best-sounding headphones for $220, easily competing with headphones that cost multiple times that price. If you are looking for the best possible sound quality for some less than decent amount of money spent, these are among the best you’ll find. And the best part is that the HD 6XX are no longer sold in limited quantity; they’re now available on a regular basis.

Images of the fourth generation iPod Touch are flowing in, thanks in part to an accessories manufacturer. Hardmac.com has images of what looks like a new...
Read more
Health Gadgets

The Puritize HOME is a high-quality Locked UV-C Home Storage Sanitizing System that works as a chemical-free in-home sanitation solution. It's both effective and safe-to-use, and perfect to keep your family protected from the spread of any dangerous germs, which can potentially be on any household items that you frequently touch / come in contact with.
Read more
Computers