Walmart has launched a new grocery delivery service that’s designed for greater convenience, as well as to keep your orders out of the hands of “porch pirates”. The company steps up against Amazon with the release of its new service.

The new service, Walmart’s InHome Delivery, is similar to a system already offered by Amazon, and involves delivery personnel that use smart entry technology to access your home and place your ordered food items on the kitchen counter or in the refrigerator. Obviously, you’ll have to accept the idea of a stranger coming in when you’re not home.

Walmart seeks to offer you some peace of mind by equipping the delivery personnel with body cameras that send a livestream to your phone when they arrive at your home. In theory, this means you can check that they’re doing exactly what they should, instead of going through your drawers or walking around your house.

If you’re not convinced yet, Walmart stated that its delivery personnel will also receive “extensive training” on how to enter customers’ homes “with the same care and respect with which they would treat a friend’s or family’s home.” With this said, you shouldn’t have to worry about coming home to find muddy footprints everywhere, or something missing. 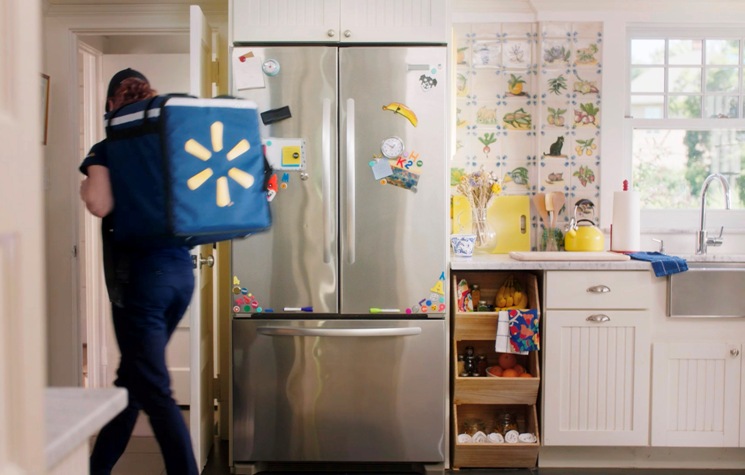 Walmart also stated that it plans to experiment with accepting returns, having their customers leaving the unwanted items on the counter, ready to be collected by the delivery personnel. The company will launch its new InHome Delivery service this fall, serving over one million customers in Kansas City, Missouri; Pittsburgh, Pennsylvania; and Vero Beach, Florida.

Does Walmart deliver to your home?

Walmart announced the new service with a message on its website: “The technology powering InHome Delivery combines the power of our store footprint, store associates, and world-class fresh supply chain,” also adding, “Now we can serve customers not just in the last mile, but in the last 15 feet.”

The company has conducted trials of such a service in the past. Two years ago, the retailer used third-party delivery companies for its in-home delivery effort, but this time it will be using Walmart workers who’ve been with the company for at least one year.

Walmart’s attempt to relaunch an in-home delivery service comes in response to Amazon Key – a similar service for Prime members, launched in 2017 – which represents Walmart ‘s focus on its online shopping and delivery operations. Walmart recently announced free next-day delivery for general merchandise, starting in Las Vegas and in various places in Southern California. The move is a direct response to Amazon’s last service upgrade from two-day shipping to one.

Inexpensive Samsung Galaxy A20 and A50 Coming