Fujifilm just released its latest product, the Instax Mini LiPlay. This camera is the latest instant film camera model for the company, but its different from all of them. More than just a camera, it’s also a mobile printer. Basically, it’s an Instax Share printer with a digital camera included on the front and an LCD screen on the back.

This doesn’t work exactly like other instant film cameras, since the film is not exposed directly from the lens, which is the case on many Zink-based instant cameras like the Polaroid Snap and the Canon Ivy Cliq. The LiPlay delivers a much more practical device both in terms of size and operational cost. The lens is much smaller, and you’ll save money as time goes on, since you won’t have to print every picture. The LiPlay is fun to use, and offers a refined experience, despite lacking some advanced features found on other Instax models. There’s a companion mobile app that’s well-designed and easy to use. The audio recording and clever QR-code-based playback system are great additions.

The camera’s design gives its user a retro vibe, thanks to the metal accents scattered around the body, creating a great contrast with the camera frame, regardless of the color you pick. The surface can be a bit slippery, making it hard to hold on to. The button arrangement is not the best. The shutter button is located on the front right of the camera, making it hard to reach with your index finger without your other fingers covering up the flash or lens. The audio record button is also on the front, located on the opposite corner. On the left side of the camera, three shortcut buttons and the power button can be found. 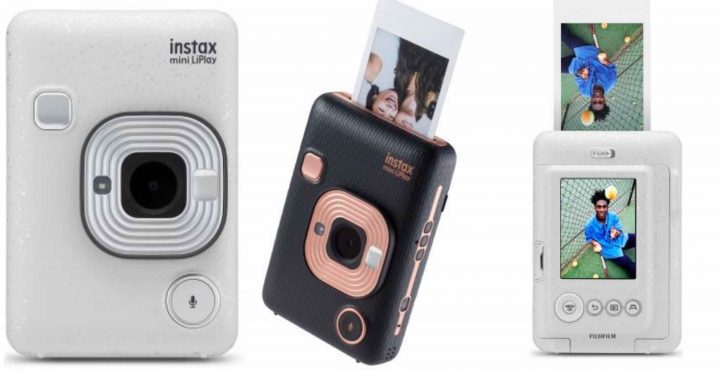 With the shortcut buttons, the user can apply a favorite frame and see a live preview before taking a picture, as well as applying the frames later. The camera has many built-in frames – you can add anything from speech bubbles to color effects – and more options can be found on the mobile app, making them fun for some situations. Image quality is not the best, but it manages to deliver the old-school instant film look. There’s a basic exposure compensation option in the menu. The flash can be manually set to on or off. Even though simplicity is a great thing, it can also create some barriers. There’s only a single focus point in the center of the frame, which means you’ll have to focus and re-adjust when photographing anything or anyone found off-center. The autofocus function is very slow. The screen is low resolution, and it should also be noted that it is not a touch screen.

Up to 45 images can be saved to the internal memory before the camera displays a “memory full” warning, or you can use a MicroSD card to have more storage space, but there’s another solution. If you need to clear space, you can always just print your pictures, which can be super fun. The screen plays an animation of the photo sliding up toward the film slot and turns into the print itself, making the film slowly roll out of the slot. But the LiPlay might be better as just a mobile printer. You’ll get better quality by taking a picture with your phone and sending it to the camera to be printed, rather than photographing something with the camera itself. In case you really love photography, having the opportunity of printing so quickly from your phone can be an amazing advantage.

One downside is the short battery life. You’ll manage to take around 22 photos and get around 24 prints before the battery warning light comes on, but you can probably take many more pictures on a single battery if you’re don’t stop to print each of them. There isn’t any removable battery, but you can charge the camera over USB, so you can keep it charged with a USB battery brick.

Instax cameras can be used as selfie tools by making use of the built-in mirror next to the lens. The LiPlay allows you to talk while you photograph yourself using its audio recording feature. By pressing the large microphone button on the front of the camera, you’re able to save around 10 seconds of audio on the next photo you take, including close to 5 seconds before the photo is snapped. You can also hold the microphone button during image playback to record audio over a previously taken photo, but you can’t record audio to a photo from your phone. This feature is useful to add audio annotations, record romantic messages or capture ambient sounds, which adds an extra dimension to your pictures. By pressing the print button on an audio photo, you’ll have the option to “print with sound”, generating a QR code and overlaying it on the print (letting you place it in any corner or right in the center). By scanning the photo with a smartphone’s camera, you’re taken to a website where you’ll be able to listen to the recorded audio and see the original picture without the QR code.

To print an audio photo, you have to connect your camera to your phone, since an internet connection is required. Both need to be turned on while the image and sound are uploaded. In case you accidentally turn the camera off before the upload finishes, the app automatically starts it again as soon as the camera is turned back on.

The Mini LiPlay is designed to work perfectly with its mobile app. There’s a simple one-time setup that pairs the camera with your phone using Bluetooth. After the connection is established, every time you turn on the camera, it will automatically connect to your phone. The app allows you to print photos from your phone’s camera roll, control the LiPlay camera remotely (including a live preview), view and listen to your audio photos, and setup the frame shortcuts. In terms of creative printing options, you can only zoom and reframe the image. You can’t apply a frame or filter to a phone photo, nor combine multiple photos into a collage.

The Instax Mini LiPlay keeps the freshness offered by instant cameras by combining a camera and mobile printer together. The sound-recording feature is super fun to use. This is all fit into a device that’s smaller than a normal Instax camera, and the mobile app takes the experience a step further.

There are many other options when looking at the instant camera market. The Canon Ivy Cliq is a great example that costs only $100, and its zink prints don’t have to develop like the Instax film does, so they’re ready sooner, and you can attach them anywhere thanks to their adhesive back. But the Cliq doesn’t have an LCD screen or the LiPlay’s audio-recording capabilities, nor the wide variety of Instax film frames with different colors and patterns made by Fujifilm, which can be important if you’re gifting this camera to your kids.

You can already pre-order the Instax Mini LiPlay, priced at $159.95. This camera combines both printer and camera functionalities together, while also feeling well-built, so you can expect it to last for quite a few years. An important thing to note is that if you think you won’t need the camera part, and you’re getting the Instax Mini camera mainly because of its mobile print function, then you may want to consider the Instax Share SP-3 printer, which prints to a larger format and includes additional creative print capabilities.

Previous articleKonami Releases a New Console, the TurboGrafx-16 Mini
Next articleGoogle Shows Off Its New Pixel 4 Smartphone On Twitter

The Firefly light has been designed to make cyclists more visible. It uses a passive Infrared sensor to detect traffic approaching from behind the...
Read more
Computers

The new Doxie GO is the document scanner company's embarkment into wireless scanning.  The best part is, you don't even need a computer anymore....
Read more