If you own an Xbox One and have been looking for a new headset, you might want to consider getting both the Astro A40 TR headset and the MixAmp Pro TR Xbox One/PC edition (there’s a different edition for the PS4/PC). The original Astro A40 gaming headset was released back in 2008. When compared to other headsets, the A40s sort of stand alone in the gaming space.
Astro’s latest version of the A40 headset is the Astro A40 TR, which comes together with the MixAmp Pro TR, both accomplishing almost everything perfectly. Compared to the previous version, the new A40 TR headset is a significant upgrade.

Does Astro a40 TR have surround sound?

The new A40 TR headset fixes the audio issues that came with its predecessor; now audio plays clearly at all times, not only through the earphones, which incidentally are equipped with Dolby Surround but also on both ends of the built-in Xbox Live chat headset. All sound breaks are gone, and the headset can even be used “pseudo-wirelessly” by plugging them into your controller.

In case you do decide to unplug your A40 TR from your MixAmp Pro TR and connect the headset to your controller, you’ll lose your surround sound, getting stereo sound instead. Sound quality is not lost, only directional sound, and you’ll easily tell the difference. This proves that your best solution is using the MixAmp Pro TR.

The Astro A40 TR delivers outstanding audio quality and was manufactured without many flaws. The earpads are soft and thick, feeling super-comfortable when worn. The same can be said about the cushioned headband, making the headset great for multi-hour sessions. The headset weighs 360 grams without its cables. Both left and right-side earcups’ outer tags can be swapped, allowing you to choose which side you prefer having your microphone. On the bottom of the left earcup, you’ll find the in-line cable connection, which allows you to connect your headset to either the MixAmp Pro or the PC. 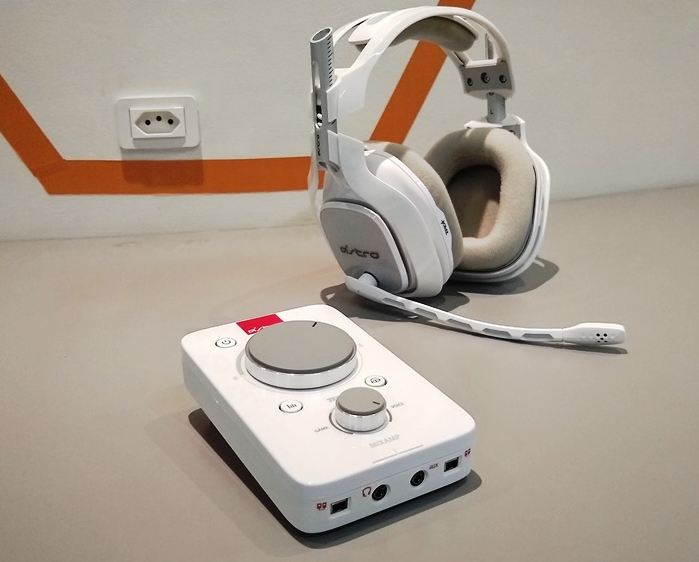 Regarding the MixAmp Pro TR, this newer version of the MixAmp has a shorter cable when compared to the older models. This makes it hard to use in a couch-gaming setup, but gamers that have a desk setup shouldn’t have any problem with cable-length. And there’s one last disadvantage; there are two different versions of the MixAmp Pro TR, for technical reasons. One for the Xbox One/PC, and another one for the PS4/PC, which makes this setup unreasonable for multi-console gamers, since it will cost an extra $130 just to get the other version of the MixAmp (Astro does sell them separately). But those are the only two noticeable disadvantages.

The MixAmp Pro TR for the Xbox One/PC is, however, a beast. It works flawlessly with the TR Headphones and really gives a quality boost to the sound, as well as several audio control options that are great for the most discerning gamer.

The MixAmp Pro TR sports a vertical design. On the rear, you’ll find a Toslink optical cable entrance, a USB Micro-B entrance (for audio/power), and a 3.5mm stream output. On the front you’ll find a headset connector input, a 3.5mm Aux input and two Daisy Chain Ports, allowing a second person that also has an A40 TR headset to connect to the same MixAmp Pro TR you’re already using. This lets both users hear the same sounds at the exact same time, and the voice-channel is also included in this functionality, making it perfect for team communication.

On top of the MixAmp, you have two dials and three buttons. The bigger dial is your main volume control, and the smaller one is a mixer that lets you adjust what you hear between game audio and voice audio. The top button lets you change between PC mode and console mode, allowing you to assign a controller to your MixAmp, when on console mode. The left side button allows you to change between the four different preset EQs (Audio Equalizers), and the right side button lets you switch between the Native Audio Presets and Dolby Surround Sound. You’re also able to customize the sound profiles via PC software.

There’s an additional $60 Mod Kit accessory, but it’s optional. With it, you can change the original headband and earpads for thicker, leather versions that will improve sound isolation from surrounding sounds. The Mod Kit is also very comfortable to use, but it’s only ideal for people that do their gaming in loud spaces, like dorm rooms or shared houses with noisy roommates. The Mod Kit’s microphone is unidirectional, perfectly ignoring most of the noises around you.

All that said, the Astro A40 TR with MixAmp Pro TR is one of the best headsets made by Astro. Their Dolby Surround sound does great, both in games and movies, while also providing amazing chat audio quality in both ends. It’s available for $250 here.