The new Powerbeats Pro wireless earphones made by Beats Electronics LLC, a subsidiary of Apple Inc., manage to stay side-by-side with Apple’s AirPods in terms of functionality, but they are better designed for heavy workouts, making them able to withstand more abuse. And don’t let their minimalist design fool you into thinking they don’t pack many features. They’re very easy to control while fitting comfortably on your ears.

Inside the box, you’ll find the charging case and under it an instruction book as well as the USB Lightning cable for charging the case. You’ll also have three extra sets of tips for the earbuds, and each pair has a different size, allowing you to find a comfortable fit for your ears. The Powerbeats Pros wrap perfectly around the back of your ear since the “ear-hooks” are flexible and bend in every direction, making them easily adjustable. This allows users to adjust their earbuds with a tighter or looser fit based on their comfort. The Powerbeats Pros are both sweat and water-resistant and are bulkier than Apple’s AirPods; but they have better sound.

In terms of connectivity, you can pair the Powerbeats Pros to any device, and they include Apple’s H1 chip for super-easy iPhone pairing. After unlocking your phone and opening the charging case, an animation will show up on your phone; then all you have to do is tap “Connect”. You can also sync them with all your Apple devices by using an iCloud account, including your Mac, iPad, iPhone, iPod Touch, and AppleWatch. Secondly, you can also use the Powerbeats Pro with any non-Apple device, like an Android phone. Just open the case next to your Android phone and go into the Bluetooth settings menu. This is where Apple’s H1 chip comes in handy, since it supports a newer version of Bluetooth, allowing for faster and easier connectivity. And unpairing is just as easy. In case you’ve paired the earbuds with another device, just place both earbuds in the case and then push and hold the button near the front of the case until the status light begins blinking continuously. 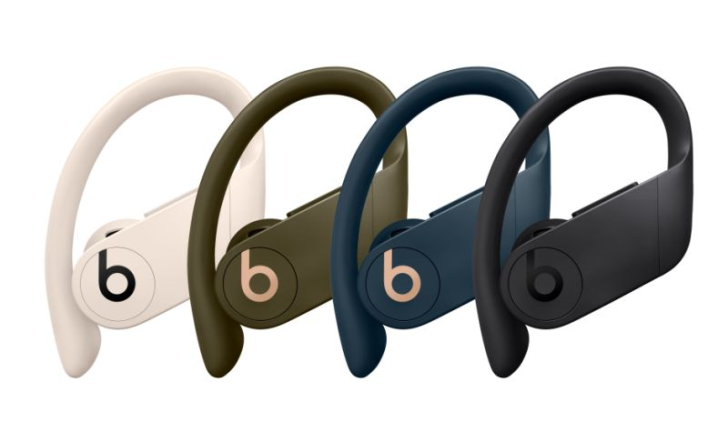 The Powerbeats Pro also pack another built-in feature that you can take advantage of; the Automatic Ear Detection feature. The Powerbeats Pro can automatically detect when you put them in or take them out of your ears, which allows the audio to start, stop or pause on its own. But, in case you’re not a fan of the auto-play/stop or auto-pause, you can disable it by opening the Settings app on any iOS device and selecting Bluetooth. After that, tap on the “i” next to the Powerbeats Pro name and just toggle Automatic Ear Detection to the Off position.
In those same Bluuetooth settings, you have the option of customizing the named used in Bluetooth menus for your Powerbeats Pro. After tapping the “i” next to the Powerbeats Pro name, click “Name”. Then just type in your custom name and exit the settings app. 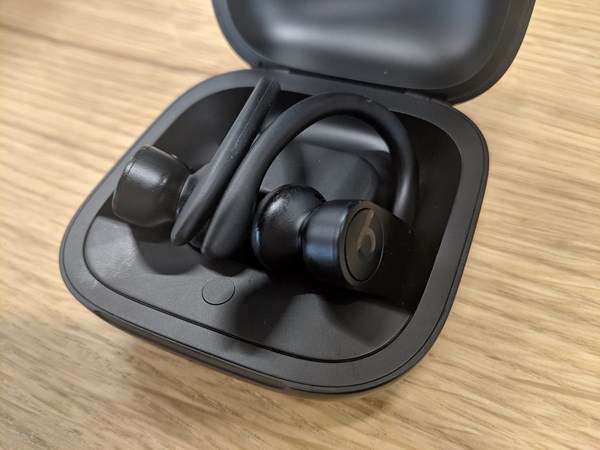 In terms of physical controls, each Powerbeats Pro earphone has a volume control on top and a single button with the Beats logo on the side that can trigger both Siri and control media playback. By pressing the button once, you can play or pause. Pressing it twice allows you to skip to the next track, while triple-pressing it allows you to go back to the previous track. By holding down the button, you can trigger Siri. These physical controls also work on non-Apple devices. The earphones also have extended range, meaning that they do not need to be right next to your phone.

Regarding the battery life, the Powerbeats Pro allow you to easily check their current battery life. Just place the earbuds in the charging case and open it next to your unlocked iPhone. A pop-up that resembles the initial pairing prompt will show up, showing the battery life status for all three pieces. You can also enable the “Battery Widget” in the “Today view” on your phone, in case you’re actively using the Powerbeats Pro. When it comes to charging them, just place the earbuds in the charging case for a fast recharge. The right earbud needs to go on the right side of the case, and the left earbud on the left side; magnets will help you place the earbud into the right spot. The charging case is charged via a Lightning port that’s located on the back. A 5-minute charge gives you 1.5 hours of use, while a 15-minute charge gives you 4.5 hours of use. They have a long battery life of up to nine hours.

If you’re interested in getting your pair of Powerbeats Pros, they are priced at $249.95 on Beats website. You can get them here.

The Timekettle WT2 Edge/W3 Earbuds are high-end AI-powered translation earbuds that can translate speech in two-way communications in real-time with 95% accuracy and at a very low latency within just 0.5 to 3 seconds, featuring Bi-directional Simultaneous Translation, Smart Noise Reduction for background noises, Online Translation support to 40 languages and 93 accents, as well as Offline Translation for 8 languages, plus 4 Translation Modes, a 6-Person Bilingual Meeting function, a 40-Person Multilingual Remote Group Chatting function, both Wi-Fi and Cellular Connectivity, Bluetooth 5.0 Connectivity for their In-App functionalities, and up to 12 hours of battery life. Powered not only by Timekettle's own AI language-translation engine, but also by 6 of the world's top leading translation engines (DeepL, Google, Microsoft, iFlytek, AmiVoive, and Hoya), these high-end AI-powered translation earbuds are designed to deliver faster and more accurate translations to all of your business meetings and personal conversations. The WT2 Edge/W3 Earbuds are great for any sort of scenario, whether that's family reunions, personal business meetings, online business meetings, teaching environments, as well as healthcare environments, and more.
Read more
Headphones/Earphones

The GravaStar Sirius P5 are open-ear wireless earbuds that feature an amazing high-resolution sound quality by utilizing Qualcomm aptX audio technology, support to Voice Calls, Environment Noise Canceling for blocking out external noises, both a Music Mode and a Gaming Mode with a low-latency of just 48ms, built-in Touch Controls, plus Bluetooth 5.2 Connectivity, support to Multipoint Connection for using them with 2 Bluetooth-enabled devices at once, 8 hours battery on a single charge, and up to 40 hours battery in total. When accounting for their incredibly long battery life, these are simply some of the best (if not the very best) wireless earbuds that you can currently get on the market. To top things off, their unique sci-fi-themed design greatly adds up to the deal as a whole.
Read more
Headphones/Earphones

The H2O Audio TRI Multi-Sport Headphones are a pair of multi-sport open-ear waterproof headphones rated to have a IPX8 Waterproof Rating that work based on built-in speakers powered by bone conduction technology, all while also featuring a Multi-Sport Design that makes them suitable to be used for multiple different sports, built-in Button Controls, a built-in MP3 player with 8GB of internal memory that allows you to store hundreds of songs, Bluetooth Connectivity, Voice Assistant support, and up to 9 hours of battery life. These sleek open-ear waterproof headphones are perfect to listen to music while practicing any sort of sports. They're comfortable to wear, easy to operate, and also have a really good run time for their battery life.
Read more
Headphones/Earphones

The SOUNDPEATS Air3 Pro are true wireless earbuds that feature a great sound quality, boasting an Hybrid Active Noise Cancelling function that brings users a fully immersive listening experience, a Transparency Mode, CVC 8.0 Noise Reduction technology that ensures users get an enhanced voice quality during voice calls, as well as built-in Touch Controls, Bluetooth 5.2 Connectivity, a Game Mode with recuded latency at just 60ms, and even TrueWireless Mirroring technology for using just one earbud alone for music or calls, or both earbuds together, all while offering you up to 24 hours of battery life. In sum, these true wireless earbuds pack all the quality-of-life functionalities you'd want to have on a pair of wireless earbuds, meaning that you can use them to enjoy your favorite music at any time of the day, no matter what you're planning on doing next, whether that's during your work-time, for studying, working out, etc.
Read more