Many existing keyless entry systems aren’t secure, but few people are likely to replace their cars just to reduce the chances of a determined thief stealing their vehicle. Nowadays, these systems can be found on cars, and are simply opened with the corresponding key fobs. A Key fob is a small security hardware device with built-in authentication that’s used to control and secure access to mobile devices, computer systems, network services and data. It features a randomly generated access code that changes periodically; usually every 30 to 60 seconds. Users will first authenticate themselves on the key fob with a personal identification number (PIN), followed by the current code displayed on the device.

Earlier in 2015, at Defcon, security researcher Samy Kamkar demonstrated a device he created, called “Rolljam”. The device cracks the wireless entry systems used both by cars and garage-door makers. When a victim tries to remotely open their car with a fob, it won’t work the first time. It’ll appear to work the second time, but then the thief will already have stolen a code that they can use to open the targeted victim’s vehicle.

But Kia UK, sub-organization of Kia Motors, South Korea’s second-largest automobile manufacturer, has announced their official temporary solution to deal with the issue. The subsidiary company took a hint from third parties and decided to release KiaSafe, a case that serves as a minuscule Faraday cage (enclosure used to block electromagnetic fields) to block the key’s wireless signals. Basically, it’s just a metal-lined pouch with nothing particularly special about it. But hey… that’s all one might need to prevent anyone from silently stealing your car while you’re asleep. 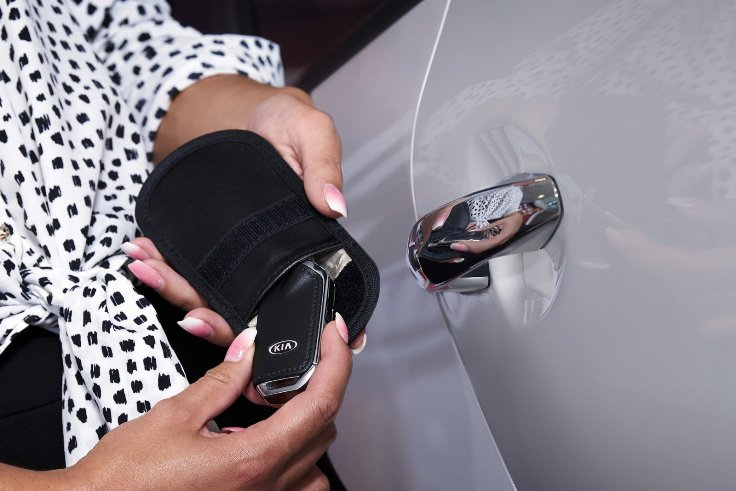 The case is available for £10 (around $13) both during the transfer process for both new and existing Kia owners. The UK based sub-organization is fully aware that this isn’t an ideal situation, since the pouch defeats the purpose of keyless entry, as you have to get the keys out of the pouch to open the door. But it’s better than nothing. This is also suitable for when you get home, by storing your key in the pouch so that thieves can’t prowl at night near your house and bridge the gap between your keys and car with an extending device.

It’s certain that future wireless key pockets are “as close to impervious to attack as possible” through technologies like ultra-wideband signals and sleep buttons. But the company’s move is more about acknowledging the issue (especially in the UK) and sparing their costumers the trouble of searching the market for an alternative. Honestly, the company should be handing out their solution for free to registered owners, due to the nature of the current flawed technology, but then again… What’s 13 dollars?

The Perfect Portions Digital Scale gives you the ability to monitor your nutrition easily, thanks to its familiar Nutrition Facts label, which can display...
Read more
Home Gadgets

The Generac iQ2000 Inverter Generator is a portable and super-quiet gas-powered generator that provides you with a trustworthy supply of power at all times. It's perfect for camping trips and backyard / tailgating parties.
Read more
Smartwatches

Following an awesome 2018 Kickstarter launch, Alpina has added four new designs to its AlpinerX smartwatch, and made some technical advancements to make the...
Read more