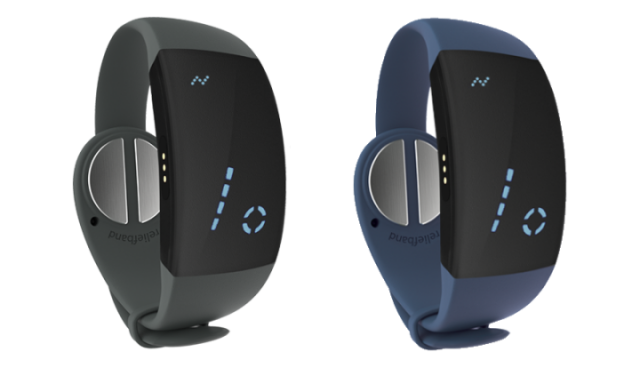 In 2016, a small company called Reliefband Technologies released a product designed to treat nausea. Also named “Reliefband”, the product was a unique wearable and its background history was that it was originally developed to control nausea, retching and vomiting associated with chemotherapy.

In January 2018, the Reliefband Technologies team announced their new product model, the Reliefband 2.0, at CES (Consumer Electronics Show), in Las Vegas, Nevada, United States. The newer version was developed even further to make it consumer friendly and it can now be used to help control vomiting, nausea and retching that are caused by motion or morning sickness, road trips, any stages of pregnancy, sea-sickness, plane rides, etc. It even works with VR gaming.

The Reliefband 2.0 is a wearable therapeutic neuromodulation device that electrically stimulates the median nerve in the wrist with an electrode that’s built into the bottom of the watch, serving as a transmitter. The median nerve is at the same location that acupuncture needles and therapeutic bands are placed when treating nausea. The device is cleared by FDA (Food and Drug Administration) and like any other product in medicine, it’s not perfect, but proving to be effective between 80% to 85% of the time.

The Reliefband 2.0, known as the bracelet that can turn off users’ nausea, features a different design from the original, having a more modern style that resembles a fitness tracker. The Reliefband 2.0 is also used together with antiemetic drugs (drugs taken to prevent or treat nausea and vomiting) to reduce postoperative nausea. 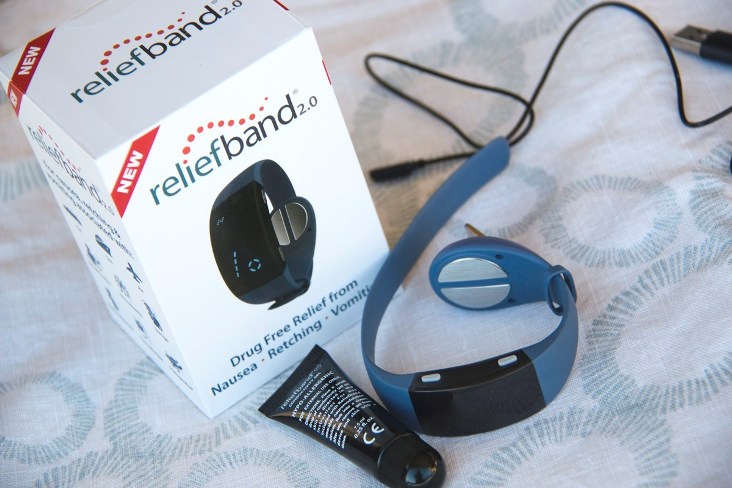 Inside the package you can find the Reliefband 2.0, a charging cable, conductivity gel, and an instruction manual. The Reliefband 2.0 has a latex-free rubber band with a built-in 316l hypoallergenic surgical steel transmitter that sits on top of the median nerve on the underside of the wrist. The best way to transmit the current to the median nerve is to coat the skin above it with the supplied conductivity gel; users should spread the gel just enough to create a thin, shiny layer around until it’s about the size of a quarter. It’s important to note that users need to replace the gel around every 2-3 hours, or if they feel the transmission tingling. It doesn’t hurt and it’s not unpleasant, but users will notice it.

The device has a sunlight-readable LED display and two function keys. The bottom bezel key is for power, while the top one is used to adjust the intensity of the sensors output; the company recommends that users set the intensity to the highest comfortable setting for maximum benefit. There’s a battery charge status indicator located at the lower right of the display. There’s also a 10-setting intensity indicator in the center of the display, as well as a therapy indicator at the top, that’s used to verify that the device is transmitting. Lastly, the substantial metal clasp allows you to tighten or loosen the band to make it fit properly.

Regarding its battery, the company states that the rechargeable Reliefband 2.0 features up to 17 hours of battery life when transmitting at the mid intensity level. This is what we found as well during our test. To charge it, users just need to connect the unique magnetic 3-pin connector to the left side of the device, while on the other end of the cable there’s a USB plug. Before using the Reliefband 2.0, you’ll need to charge it, taking about two hours to reach its full charge.

The Reliefband 2.0 is currently available in two colors: Charcoal (black) and Denim Slate Blue. It’s priced at $175. You can find it here. 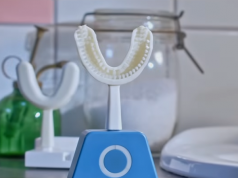 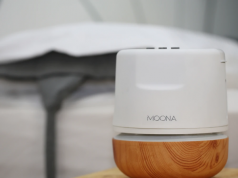 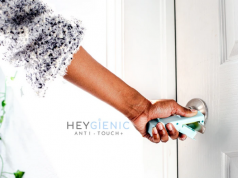