If you’re the proud owner of an Xbox One and happen to be in the market for a new wireless gaming headset, then take some time to take a look at LucidSound’s brand-new LS35X Rose Gold Wireless Surround Sound Gaming Headset for Xbox One.

LucidSound is a company committed to bringing change to the gaming industry by taking a fresh approach to gaming audio with the appropriate knowledge to build a quality product. The company is also conscious that gaming is truly for everyone, so it aspires to make affordable products that anyone can enjoy by developing audio products specifically for the needs of gamers in their everyday lives.

Still, just like its two older brothers, the LucidSound LS35X Rose Gold Wireless Gaming Headset packs the same convenient features, while also offering a lightweight and comfortable fit. Thanks to its wireless connection, the LucidSound LS35X Rose Gold Gaming Headset can easily be considered the family’s prodigy, allowing users to go fetch that fresh glass of water during a gaming break without having to be removed. 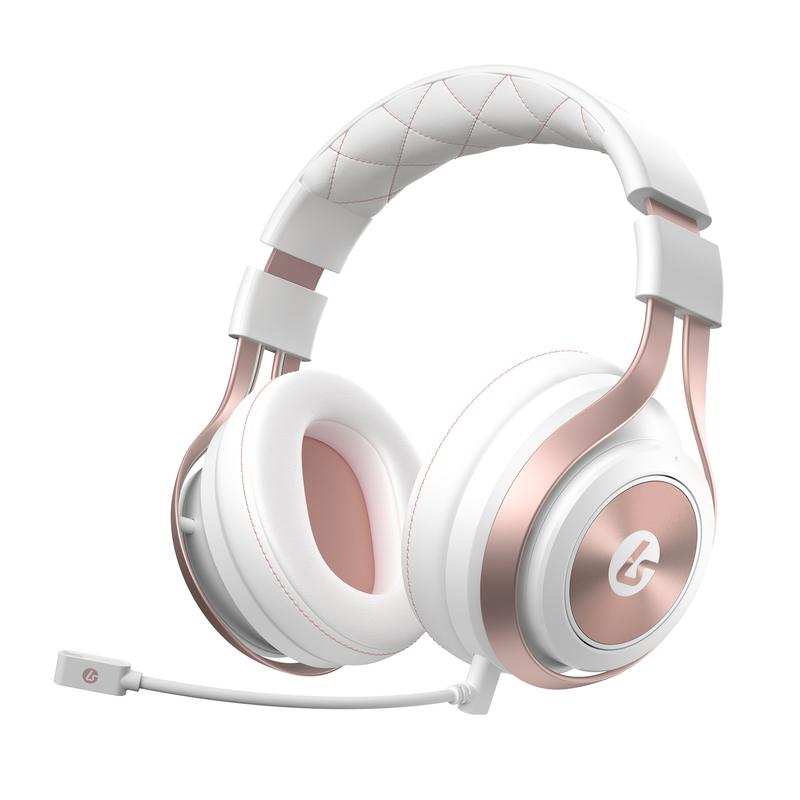 They LS35X comes equipped with super-soft leatherette, Quick Swap, plush earpads that are easily replaceable. This means that after a couple of years of use, just like any other headset, you can get a new pair of earpads to make the headset look brand new again. The are also extremely breathable (this is another plus), meaning that you won’t sweat, and your ears won’t overheat, even when wearing them during long gaming sessions. Despite the earpad’s cushions not looking the thickest, they’re just the right density, making the headset feel like it floats on your head, and after a while you’ll even forget it’s there. 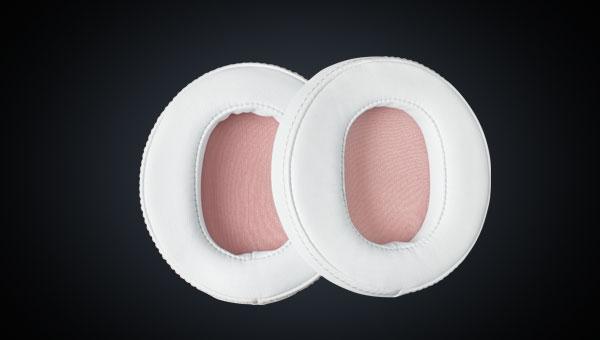 The LucidSound LS35X Rose Gold Wireless Gaming Headset also comes equipped with a lightweight metal frame, which is made of durable metal for added strength, as well as a flexible headrail that provides users with a comfortable fit. The frame’s outer part is made of hard synthetic leather and comes with the company’s name (LucidSound) imprinted/stamped on it. 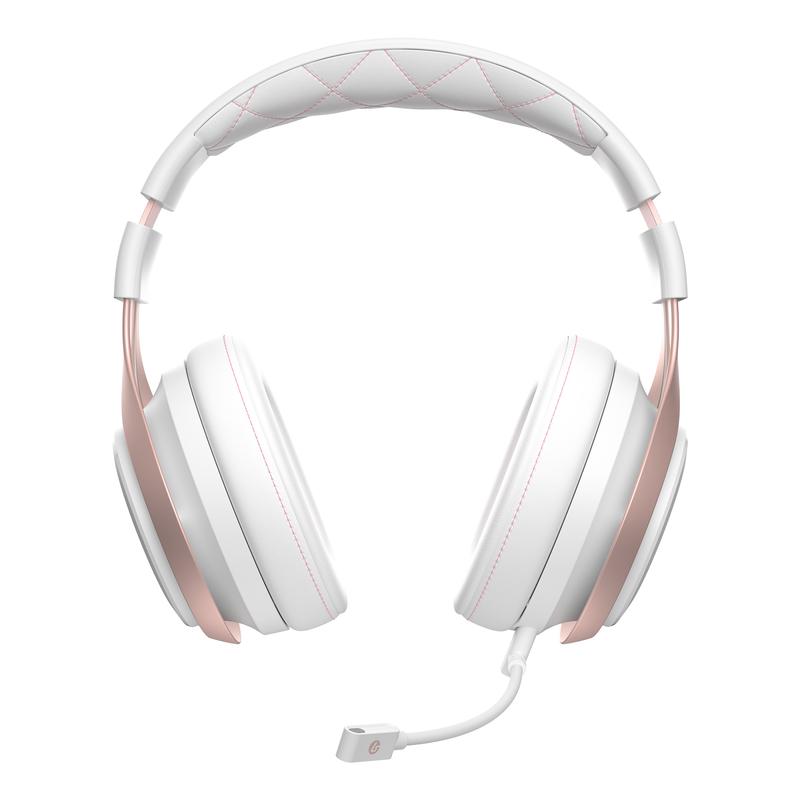 The LS35X Rose Gold Wireless Gaming Headset also comes with built-in custom tuned 50mm speakers that feature state-of-the-art neodymium magnets, making the headset capable of providing deep bass and clear highs, offering its users a Premium Audio experience. The LucidSound LS35X Headset offers Amplified Stereo Sound, really showing LucidSound’s audio acoustics signature, allowing you to immerse yourself in your gameplay and forget everything else that’s outside your game world. These 50 mm drivers feature a Frequency Response that ranges between 20 – 20,000 Hz with a Power Output of 70mW/32ohm per channel.

Located at the bottom of the left side earcup you will find the power button, the micro-USB Charging port, the 3.5 mm port, and the proprietary port for the Removable Boom Microphone for Multiplayer Voice Chat. Just a bit in-front of the Removable Boom Mic. port you’ll find a discrete built-in microphone that can be used for calls on your smartphone when you connect the headset to it via the included 3.5mm Mobile Audio Cable. 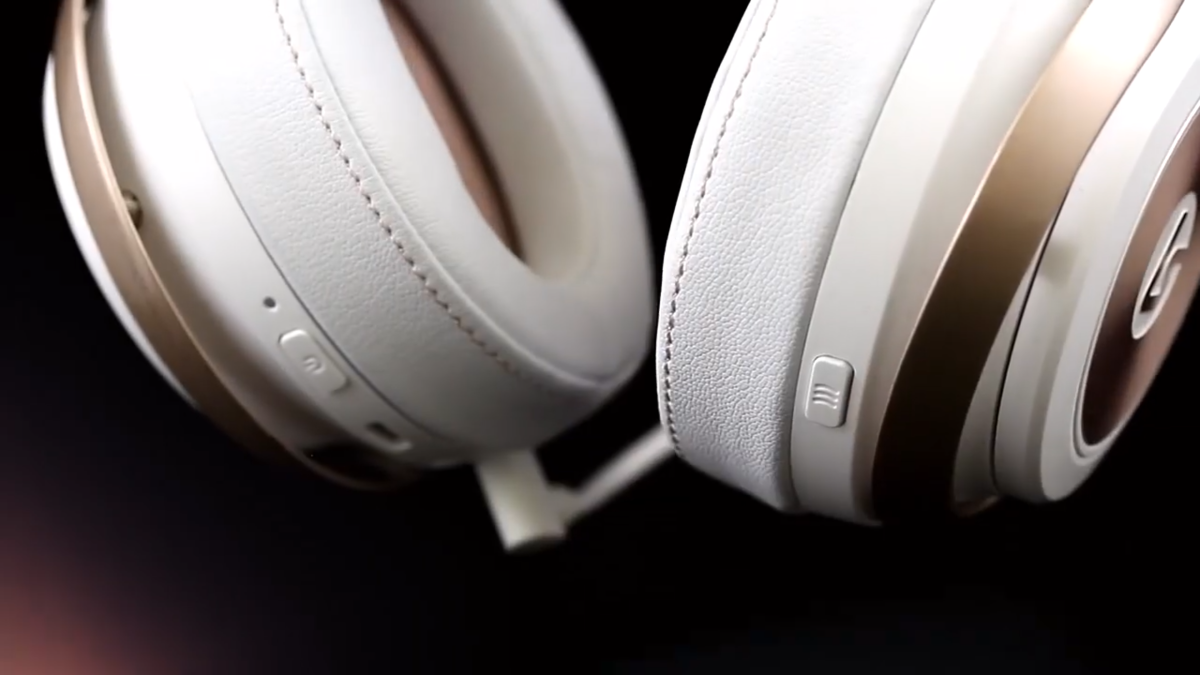 Located at the bottom of the right side earcup users will find the Xbox One Pairing Button (also known as One-Button Wireless Sync). The headset connects directly to your Xbox just like a controller, requiring no USB dongle or base station, making it a simple and fast process.

Within the box users will find: their pair of LucidSound’s LS35X Rose Gold Wireless Gaming Headset, the included Removable Boom Mic, a 3.5mm Mobile Audio Cable (connects to your smartphone), an included USB-micro USB Charging Cable (used for charging the headset via its micro USB Charging port), a Mic Port Cover (used to cover the Removable Boom Mic. port when you’re not using the Mic.), and a Quick Start Guide (not included in the picture). 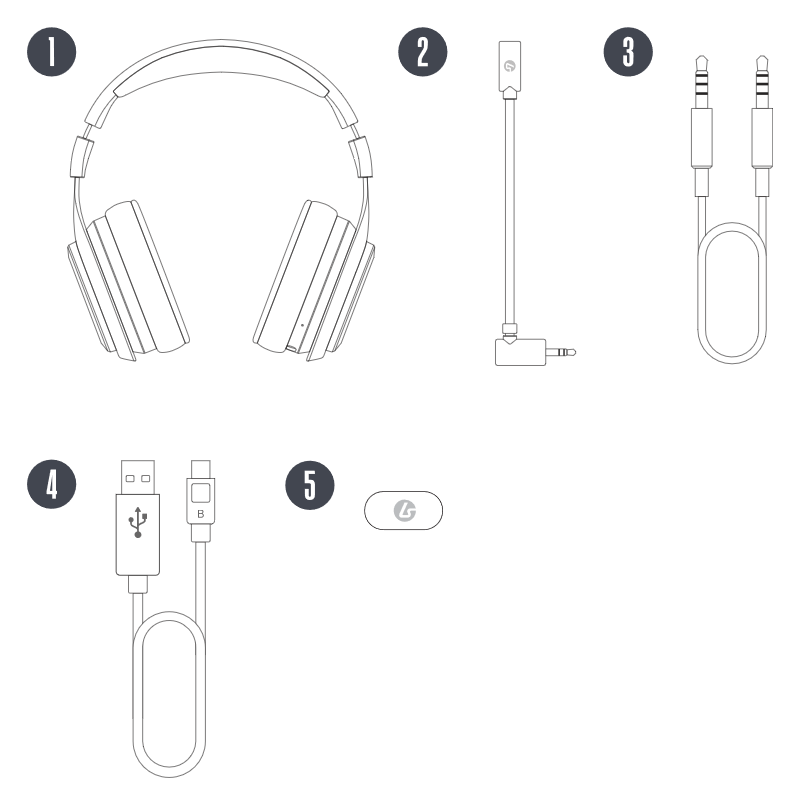 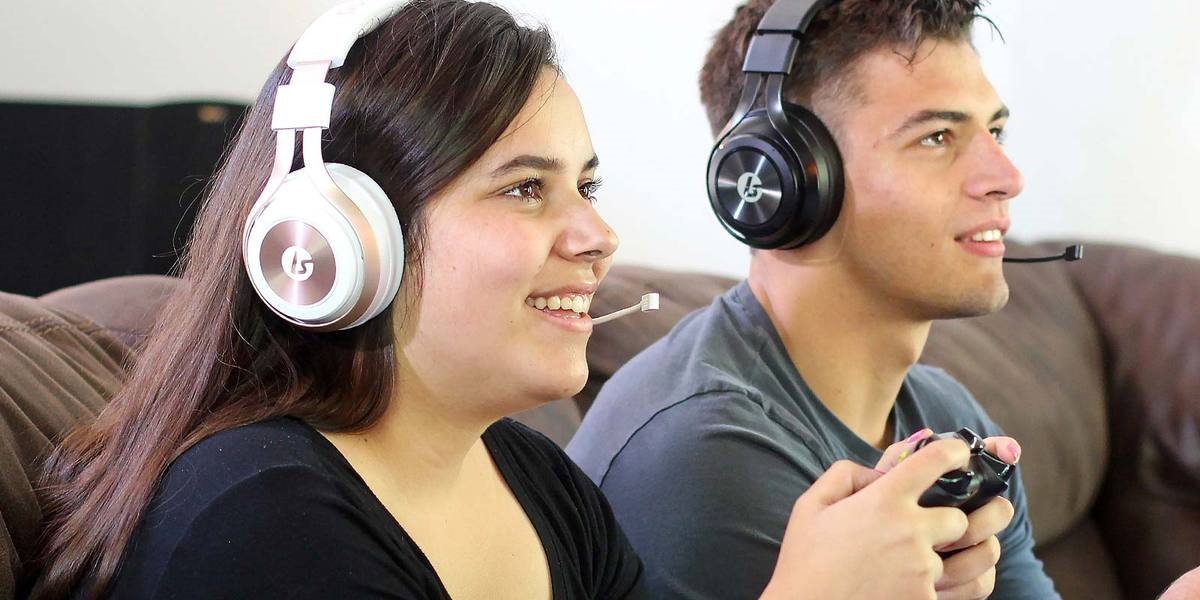 Windows Sonic for Headphones on Xbox One delivers immersive surround sound for superior positional audio. This allows you to hear every detail with remarkable clarity for a true immersive gaming experience. It’s important to note that the LS35X Wireless Gaming Headset is also compatible with Dolby Atmos for Headphones.

The LS35X Wireless Gaming Headset features a Xbox One Pairing Button (located at the bottom of the right side earcup), allowing you to easily pair it with your Xbox One in a matter of seconds. The headset connects directly to your Xbox just like a controller, meaning there are no cables involved, no base-station, and no long setup process.

Compatible with the Xbox One, Windows 10, and Mobile

The LucidSound LS35X Rose Gold Wireless Gaming Headset can be connected directly to your Xbox One via One-Button Sync, offering you 100% Wireless Console Game Audio and Wireless Console Chat Audio. It can also be used with Windows 10, but keep in mind that you might need an Xbox Wireless Adapter, and that’s not included. Lastly, the LS35X Gaming Headset can also be connected to a smartphone via its 3.5mm port, offering you high-quality Mobile Audio.

Just like its predecessors, the LucidSound LS35X Rose Gold Wireless Gaming Headset offers its users Intuitive Quick-Access Controls. Users can easily turn the volume wheels that are built into the earcups (outer side) to control/adjust different volume settings, as well as press the center button on each earcup to mute and unmute the mic and/or global volume. 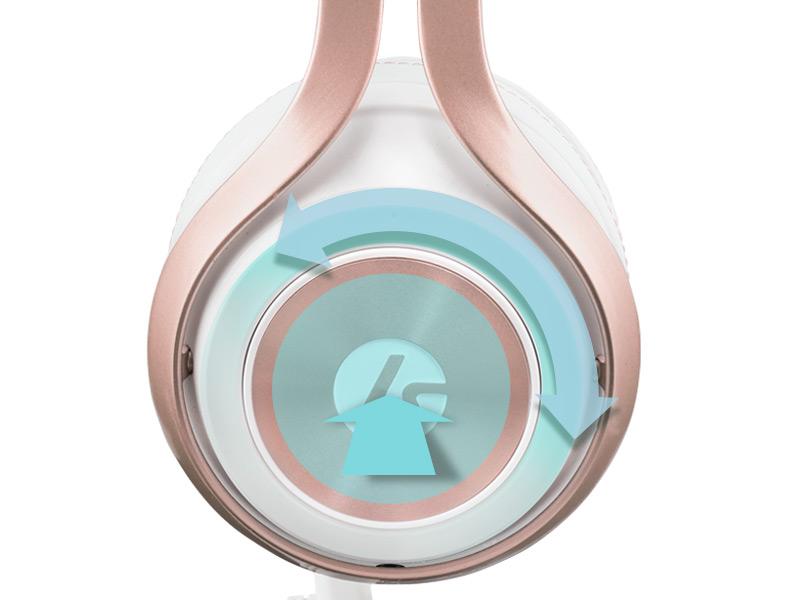 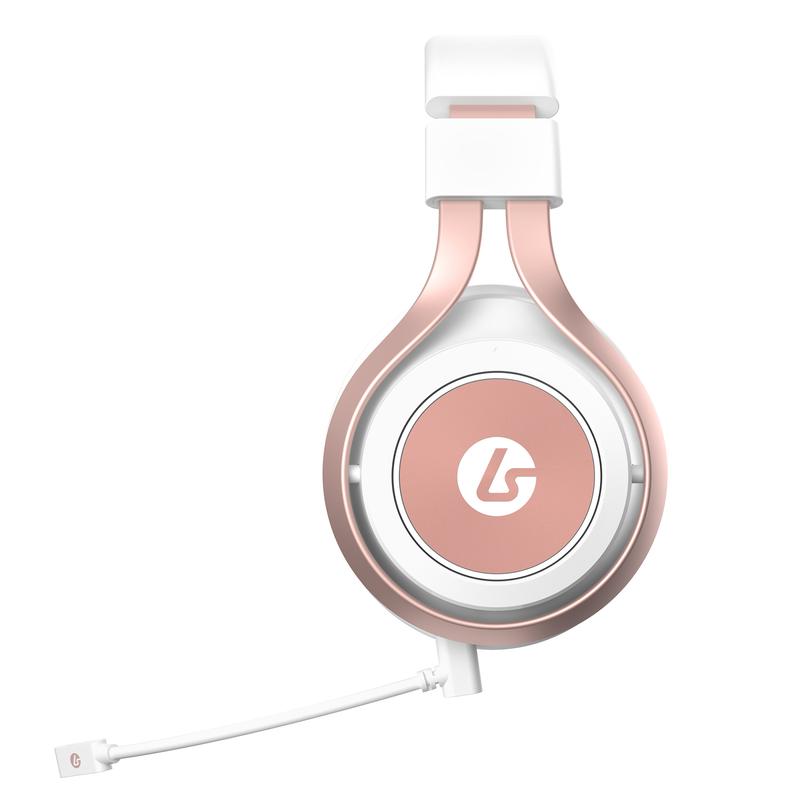 The LucidSound LS35X Rose Gold Wireless Gaming Headset also comes equipped with a flexible, noise-cancelling, uni-directional boom microphone that features a LED mute indicator. The flexible mount ensures that the microphone stays where you put it, while its LED indicator will always show you when the microphone is muted. The discrete built-in microphone is only used for calls on your smartphone when the headset is connected to it via the 3.5mm Mobile Audio Cable. 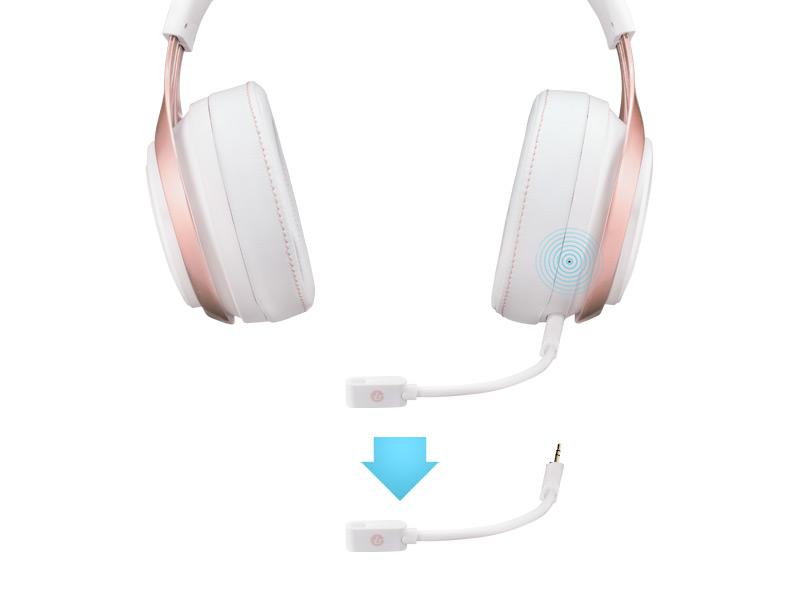 Originally, the LucidSound LS35X Wireless Gaming Headset (the first model – Full Black, not the Rose Gold) was supposed to be released during December, 2017, but it faced a series of delays and ultimately wasn’t released until last year’s early October (2018).

While all of the other mentioned headsets were released during the year of 2017, LucidSound assured its customers during the unexpected delays that the wait would be worth it. Considering everything that the headset has to offer, the company was definitely right.

LucidSound’s brand-new LS35X Rose Gold Wireless Surround Sound Gaming Headset is one of the best Direct Connect Wireless Headsets for the Xbox One currently available. It features a simple and sleek design, it’s lightweight and comfortable, and offers its users LucidSound’s proprietary quick-access audio adjustments. This is simply one the best headsets ever made by LucidSound (if not the best).

If you’re interested in buying the LucidSound LS35X Rose Gold Wireless Surround Sound Gaming Headset for Xbox One, each pair is currently going for $180. You can order it at LucidSound’s official website, on this page here.