As a way to personally thank Amazon employees, Amazon’s CEO and founder Jeff Bezos visited the company’s employees in both an Amazon warehouse, as well as a Whole Foods store, which is an upscale grocery chain that the company now also owns.

Bezos made his surprise visit during this past Wednesday (April 09th) to that same Amazon warehouse – which is just one of many of Amazon’s fulfillment centers – as well as the Whole Foods store to personally thank many of the company’s employees who’ve been working on the front lines to get critical goods to people everywhere around the world during this hard time of mandatory curfew, which was a necessary measurement to lessen the impact of the COVID-19 worldwide pandemic.

Not only was the Amazon CEO wearing a disposable face mask during his surprise visit to Amazon’s facilities, but also got his temperature checked before going in, and even gave a nice example of himself practicing social distancing. 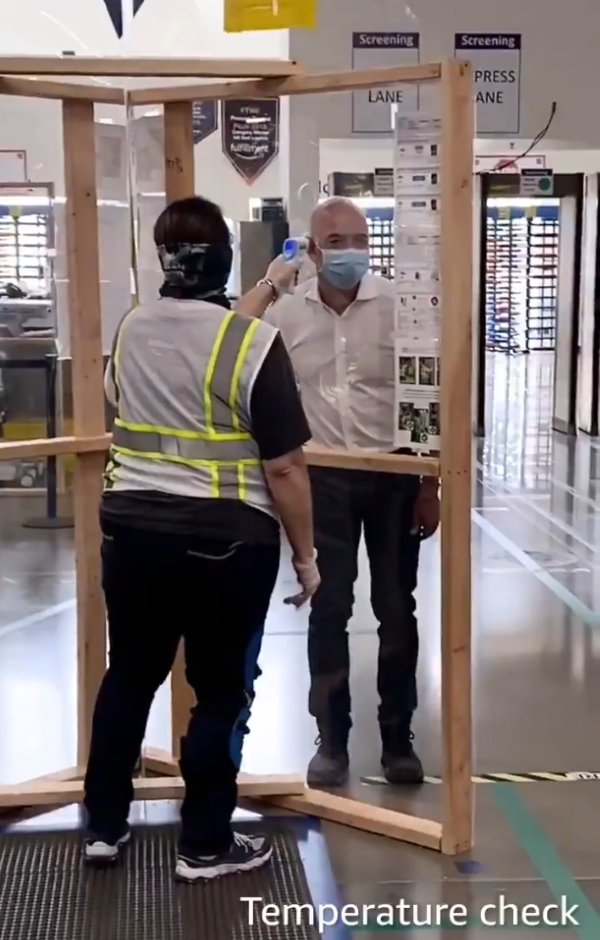 This could almost be seen as a dystopian sight, as Bezos interacts with employees from afar while staying safe beyond his mask, keeping himself at least six feet away from any Amazon worker, strictly following the newly announced mandatory social distancing guidelines.

According to Bloomberg’s Spencer Soper, Bezos’ visits to both of Amazon’s facilities equally took place within the Dallas area.

These visits might be seen as a direct response to the recent employee protests, which started as a way to demand better working conditions, and for the most recent protests, an additional payment, which could be considered as a reasonable raise justified by the struggle against the coronavirus pandemic, which continuously keeps dragging on without ever showing its end (so far).

The company quickly shared the video of the episode via its Twitter News account – Amazon News (@amazonnews) – later on that same Wednesday (April, 09, 2020), during which Bezos can be seen striding up to a warehouse worker to get his temperature checked before proceeding through the rest of the facility.

Today’s visits by our founder and CEO @JeffBezos to say thank you to Amazon fulfillment center and Whole Foods employees. We’re all incredibly proud of the thousands of our colleagues working on the front lines to get critical goods to people everywhere during this crisis. pic.twitter.com/dygb345wDM

“Today’s visits by our founder and CEO @JeffBezos to say thank you to Amazon fulfillment center and Whole Foods employees. We’re all incredibly proud of the thousands of our colleagues working on the front lines to get critical goods to people everywhere during this crisis.”

During that same video shared by Amazon, Bezos can be seen walking up a set of stairs and silently examining all of the activities taking place right below him, as well as waving to employees, shouting out some greetings, or even brandishing a thumbs-up. 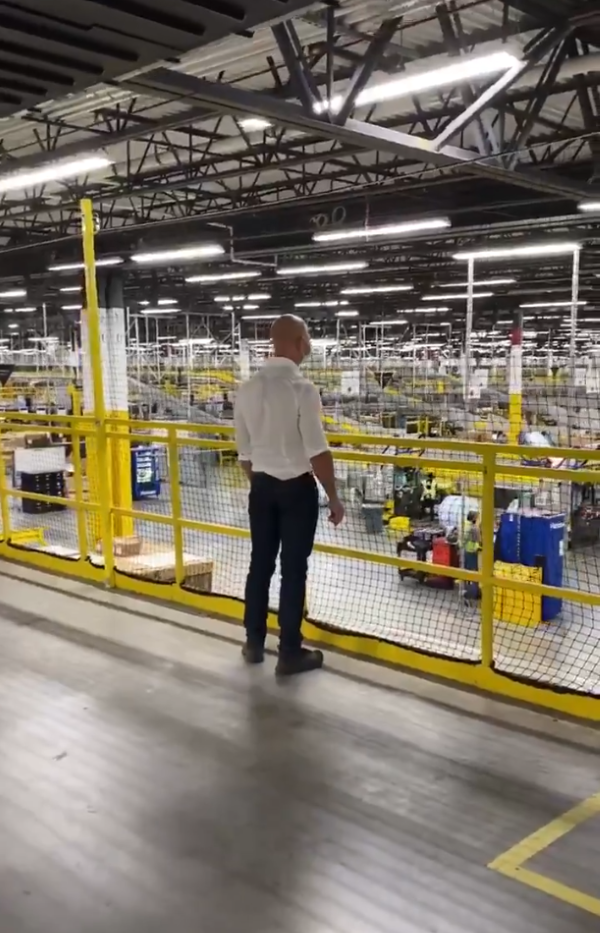 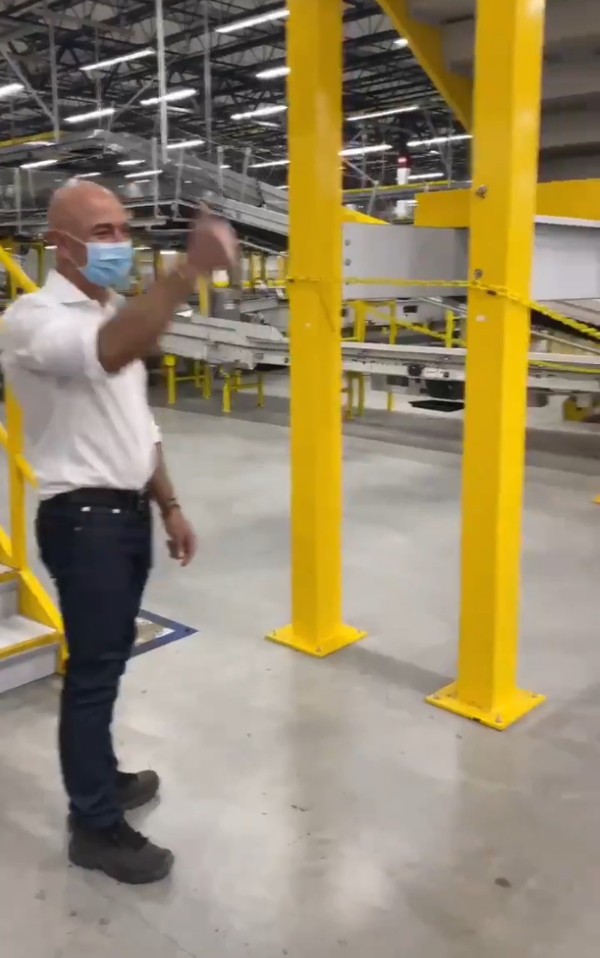 Later in the video, Bezos can also be seen walking around a Whole Foods store, where at one point, he jokes around, saying that he’s sorry for not being allowed to shake a worker’s hand, which he noted that it’s “a hard habit to break”. 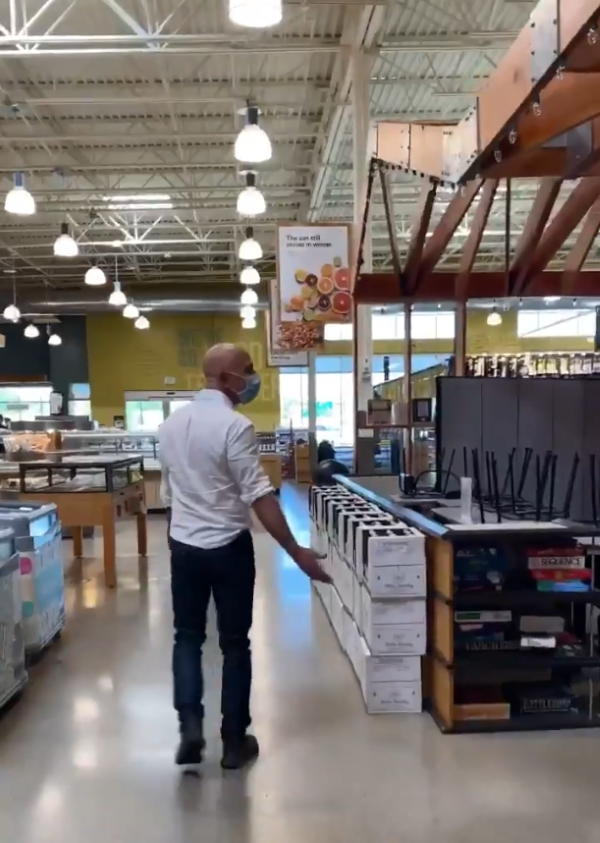 The visit came right after a personal letter written and released by Bezos himself to the entire company. The online letter was written and published by Amazon’s CEO during March 21, 2020 as a way to raise awareness for all of the company’s employees that have been working hard at Amazon’s facilities during the COVID-19 world crisis.

Up to that point, Bezos had been quiet about the emerging Coronavirus crisis, which has now caused his company to work harder than ever, forcing employees to go above and beyond like never before, working as hard as possible to keep things running.

In this open letter, Bezos shared some of his thoughts about the COVID-19 crisis, talking about the availability of masks and temperature checks, as well as mentioning what’s next for the company’s future.

Meanwhile, Amazon’s website already has an online banner found at the very top, where the company has announced that it will be de-prioritizing all non-essential shipments.

As such, don’t be surprised if you’ve recently ordered less meaningful items like a book or any luxury item and those take forever to arrive at your doorstep.

It is somewhat ironic, as Amazon’s self-imposed delivery standards would make this delayed delivery situation for less important items something unthinkable for the company before the COVID-19 worldwide crisis ever started.

On the other hand, workers at Whole Foods (the company’s upscale grocery chain) started a nationwide “sick out” last week to demand for paid leave for any worker who’ve had to forcefully quarantine themselves, as well as health-care coverage for any workers that don’t have it up to this point (something which should most likely be mandatory to have for workers that are forced to deal with the COVID-19 threat at a daily basis).

During the past few days, other workers at some of Amazon’s warehouses have also walked off their jobs to demand a better response from the company to identified coronavirus cases.

Furthermore, the company has also been under intense fire for supposedly having belittled one of its workers at its Staten Island warehouse, which is none other than the person who lead the protest at that location.

The company stated that this worker’s firing was directly related to a violation of social distancing mandates, but recent rumors have also revealed that Amazon was dismissive of its employee as “not smart or articulate.”

Nonetheless, the company has undeniably been showing some compassion for its workers, as it provided both temperature checks and face masks for its employees, both of which Bezos demonstrated in the video that was recently shared by Amazon News’ Twitter account.

Additionally, the company has also introduced reinforced health-safety measurements, as it has also been cleaning all of its facilities more frequently as a way to reduce the chances of any worker contracting the new Coronavirus disease. On top of that, employees are also required to sanitize their work stations both at the very beginning and ending of their shifts.

Huel is a nutritionally complete powdered food ​that contains all the proteins, carbs, and fats you need, and all the essential 26 vitamins and minerals are also present in the exact "Daily Recommended Amounts" declared by the European Union. As such, by using any food product from the Huel Nutritional Food Line you can get a 100% nutritionally complete food and achieve a balanced and healthy diet that includes all the essential nutrients that your body requires, including vitamins, minerals, antioxidants, carbohydrates, protein and essential fats. Thanks to that, with the Huel Nutritional Food Line you can have a balanced and healthy diet option that can help you with weight management, as well as help you to lose weight and even to build muscle.
Read more
Health News

Apple Cancels AirPower After Much Deliberation