When traveling with a lot of gadgets (like Smartphone, Wireless Headphones/Earplugs, Laptop, Digital Camera, and more), we should always look to bring along a source of power to recharge all those devices so that we can keep them “juiced” up during our time away from home. This way, it’s important to know that you shouldn’t just take any random universal power outlet you see, as cheaper brands might offer no security at all, thus putting all of your devices at risk of going through over-currents (power spikes) or home electrical fires that cheap power outlets usually experience. However, that won’t happen when you use a power outlet like the Austere VII Series Power.

The Austere VII Series Power is a high-quality power outlet that’s extremely safe to use. Not only does it come equipped with a ton of Smartfit outlets and USB ports, but it also offers protection to all of your connected gadgets against over-currents (power spikes) and home electrical fires, thus keeping all of your gadgets completely safe while you’re using it.

This is without a doubt one of the best (if not the best, and safest) multi-port power outlets available on the market. Other than what was already mentioned, it still packs a couple more cool features.

Let’s take a more detailed look at it and check just about everything it has to offer.

First of all, let’s talk about its discreet design. While what the Austere VII Series Power can do in terms of power and safety is obviously important, so is how the power outlet actually looks.

As such, this widely capable and super functional power outlet features Austere’s proprietary aDesign, meaning it packs a sleek and discreet design that allows it to easily blend in with any type of furniture. 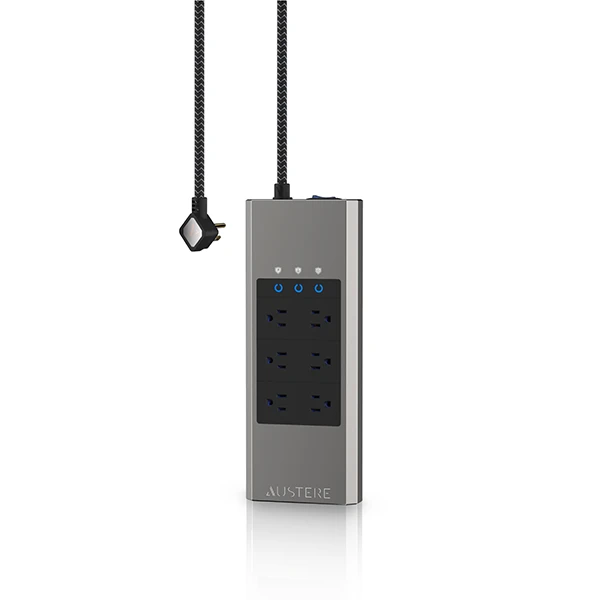 This high-quality power outlet also comes equipped with a WovenArmor High-Flex Cable that provides strength, durability and protection to the outlet to ultimately ensure a lifetime of quality performance. This High-Flex Cable can route comfortably in tight places, which ultimately provides users with an easy installation (quick plug-and-play setup).

Additionally, the Austere VII Series Power also comes equipped with a total of six (x6) thermal-protected, ultra-wide SmartFit outlets (located at the top), which have plenty of room to accommodate even the bulkiest plugs.

Each of these ports can deliver up to 2.4 Amps of charging power while protecting all of your low-voltage devices with an additional 45W USB-C PD port.

These smart ports are designed to minimize charging time for your personal electronics such as Smartphones or any other handheld device that charges via USB, like tablets for example.

The Austere VII Series Power also features a “Safety” Interface that includes a total of three different LEDs that inform users about everything that’s going on with the device.

Its Power LED indicates that the power strip is plugged in and receiving power.

Additionally, its Ground LED indicates that the unit is plugged into a properly grounded circuit.

Lastly, the Protected LED indicates that the power strip’s surge suppression components are intact and providing full protection against surges.

This high-quality power outlet features an Isolated Outlet PureFiltration that works as an advanced EMI/RFI filtration system which insulates the power signal from external disturbances to deliver both video and audio clarity to your HDTV and sound system.

EMI – or Electromagnetic Interference – occurs whenever devices are in close proximity to one another.

However, thanks to the power outlet’s Isolated Outlet PureFiltration, even when another external device, such as a vacuum, surges as it’s turned on and gets close to the Austere VII Series Power, it will not impede or disrupt the power outlet at any given moment, thus keeping all of your devices safe.

Furthermore, this power outlet also users PureFiltration Technology, which helps to clean noise and artifacts that can travel through power lines, thus keeping both of those from impacting your devices in any way.

Other than providing Rapid Charging for all of your devices, the power outlet’s built-in Omniport USB ports can also offer protection for low-voltage devices.

Furthermore, this power outlet also comes with a 45W USB-C PD port, that, unlike other power options, can uniquely charge your laptop through a single cable.

Its surge protector regulates the power coming from the outside powerline to ensure that your devices never burnout from a high voltage spike, which can potentially be super harmful to your equipment.

The power outlet’s Flameless MOV Protection gives you the ultimate peace of mind, meaning that any potential powerful surges will never result in dangerous and harmful house fires.

At the same time, its OverCurrent Protection ensures that its power circuit cannot exceed 15 amps, which could ultimately cause your devices to short circuit or create dangerous temperatures that may also lead to a home electrical fire.

Joules – which is the protective layer of energy that defends your components – are finite, and as such, surge protectors can wear out over time. As soon as they are gone, it leaves your system completely unprotected from shock or surge.

However, while traditional surge protectors only last a year or two, the Austere VII Series Power’s “Safety Interface” integrates a Protected LED, which, as mentioned earlier, indicates that the power strip’s surge suppression components are intact and providing full protection against surges.

That ultimately takes out the guesswork of when your Austere Power needs to be replaced. Its blue protection shield LED icon on the Power unit will cease to illuminate once the device’s Joules have been depleted.

Still, there’s nothing to worry about, because, unlike traditional surge protectors, that won’t happen for a long time, as the Austere VII Series Power is rated to last more than five times as long as most power products.

It also integrates a Long-Term Surge Protector which will allow the power outlet to last more than five times as long as most other power products available on the market.

If you’re interested in getting it, each unit is currently going for $180 and comes accompanied by the company’s Component Guarantee (protect your devices from damage, regardless of value, whenever plugged to the Austere VII Series Power). You can order yours online, directly from Austere’s official shopping page, which you can access by clicking here.