While playing fetch with your beloved dog(s) can be quite fun, it can also be quite exhausting, as dog owners can usually start getting shoulder pain (or even injuries) sometime after throwing Fido his favorite ball for countless times. However, for dogs who are very attached to their owners, having their favorite human stopping a fun game of fetch can be quite annoying. By using the Hyper Pet K-9 Kannon, dog owners can not only prevent shoulder pain/injuries while playing fetch with their dog(s), but also spend more time playing fetch with their furry four-legged friends.

The Hyper Pet K-9 Kannon is basically a dog toy that works as an interactive ball launcher for dogs. It’s designed in a very simple and intuitive way so that dog owners can easily use it.

Literally all you have to do is load up a tennis ball for your dog to fetch, aim a bit high-up and away from your dog to assure that you never hit up, and then just press the trigger. Right after that, you’ll see your tennis ball quickly flying away to a mid-range distance and Fido will be able to chase it in an exciting fashion as it bounces away.

The Hyper Pet K-9 Kannon is a medium-sized ball launcher for dogs that measures 24 inches long by 7.38 inches wide by 3 inches tall, weighing around just 1.65 lbs.

This easy to use ball launcher comes equipped with a comfortable handle, as well as a reliable and very easy-to-use launching-trigger, thus offering all dog owners a very comfortable grip.

Furthermore, it also comes equipped with an adjustable lever that can be easily adjusted by dog owners to quickly change their ball launcher’s throwing distance, thus adjusting the distance they launch the tennis balls for their dog(s).

The further back you pull, the further the tennis ball blasts away, which basically means more thrilling and running exercise your doggy gets.

The Hyper Pet K-9 Kannon works flawlessly with Hyper Pet Regular Tennis Balls, but be aware that it only comes with 1 ball included.

As mentioned before, the Hyper Pet K-9 Kannon is incredibly easy to operate.

It’s built-in quick trigger seamlessly launches each tennis ball shot to a decent distance, allowing dog owners to get their dog(s) jumping and fetching in no time.

With such an easy way to play fetch with Fido, dog owners can avoid shoulder pain or severe shoulder injuries that are commonly associated with the traditional way of playing fetch with dogs (shoulder tosses/throws, just like baseball).

And even better than that, more playing time basically means a healthier and happier dog. That means that it’s basically “Win-Win” for both dog owners and their dogs.

Inside each package users will find: their Hyper Pet K-9 Kannon and one included Hyper tennis ball for dogs.

The Hyper Pet K-9 Kannon also features a Hands-Free Ball Pick-Up method. To load up its included tennis ball inside the ball thrower, all you have to do is place the launcher’s nuzzle over the ball and pull the lever, which will quickly get the ball sucked in and stuck inside its launching tube.

Lastly, the Hyper Pet K-9 Kannon also comes equipped with two built-in extra-ball storage slots that give dog owners the option to have a total of three (x3) tennis balls per each fetch game they play with Fido.

While they shoot the first ball and Fido runs for it to fetch it and bring it back to their beloved owner, dog owners can quickly grab a second ball from one of the launcher’s two storage compartments (both located right in front of the trigger slot that’s used to launch the tennis ball), insert the second ball inside the launcher’s tube/barrel, and then grab the first and original tennis ball from Fido’s mouth after he retrieves it and delivers it, and simply place it the then free storage compartment. 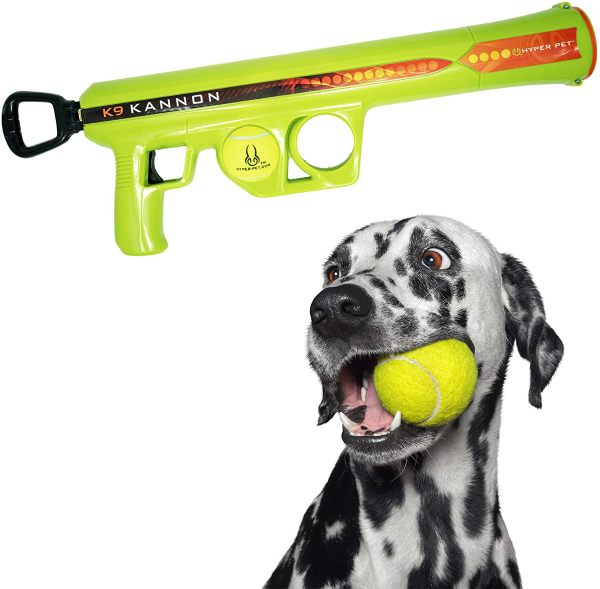 Then it is just about shooting the second ball and repeating the process. Rinse and repeat, shoot and fetch! For Fido, “more run” will only mean one thing… “More fun!”

The Hyper Pet K-9 Kannon is a reliable and super easy-to-use medium-sized ball launcher for dogs that allows dog owners to spend extra time playing fetch with their dog(s) without risking elbow pain or injuries associated with the traditional way of playing a game of fetch. 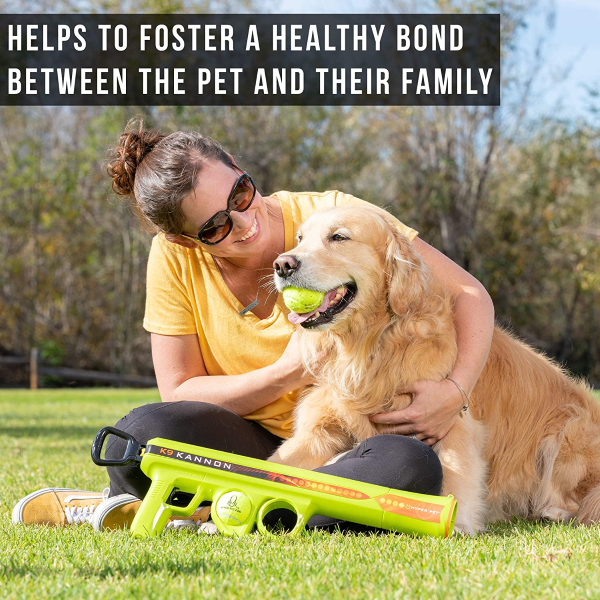 With it, dog owners can spend many extra hours with Fido playing catch without ever feeling tired, or even hurt in any muscle and/or joint.

Furthermore, more hours playing basically means that their dog(s) get to spend more time running around and exercising, as well as more time playing around and having fun.

If you’re interested in buying the Hyper Pet K-9 Kannon, each unit is currently available for around $20 each. You can get yours right now from any local dealer within your state, which you can find by checking Hyper Pet’s official website.

However, if you’d like to get it online, the company also has it available for sale online, and you can get it directly from Amazon (who the company is officially partnered with to sell their products) for $20 each.

Lastly, there’s also a smaller version that’s designed to be used for smaller dogs, called the Hyper Pet K-9 Kannon Mini. Click the provided link to check where to buy it within your state (company’s website dealer list).

The PupPod Rocker with Feeder is a 2-piece App-enabled enrichment puzzle toy system for dogs that provides dog owners with a powerful tool to encourage their dogs to stay active and healthy.
Read more
Pet Gadgets

SwiftPaws In-Stock for the Holidays for the First Time Ever

The SwiftPaws Home is a safe-to-use lure coursing machine home-kit for dogs that’s designed to be set up at your home’s backyard and used at a regular basis so that Fido can stay healthy and fit.
Read more
Pet Gadgets

The Modus M-230 is a handheld ultrasonic Dog Bark Control and Behavior Training Device that allows dog owners to train their dogs to be able to control their barking, clawing, and chewing urges in a gentle and non-intrusive manner. With it, dog owners can easily have a convenient, non-intrusive, consistent, and effective way of teaching their dogs to stay away from any type of unwanted behavior like loud and unwanted barking, as well as aggressive clawing and chewing.
Read more
Pet Gadgets