For people who are constantly on-the-go and spend a lot of their time abroad, communication is key whenever they need to find specific things or places within the countries they’re visiting. During their stay in a foreign country, travelers often struggle to find the right words to ask for basic things like the nearest grocery store, bus stations, or the closest public bathroom. However, all of these complications can be avoided, and the difficulties of a foreign language can be overcome, and all you have to do is use a simple and tiny device like the Pocketalk Classic Translator.

The Pocketalk Classic Translator is a portable and lightweight translator that works in a total of 74 different languages, featuring an astonishing 7 hours of battery life and 240 hours of standby battery life, making it ideal for traveling, business conversations, and more.

Not only that, but this super-handy pocket translator also comes with built-in mobile data – 3G (W-CDMA) / 4G (FDD-LTE) – which allows users to use it wherever and whenever they need it. Its global unlimited cellular data will work for a total of 2 years with no monthly fees included.

With this ultra-portable and super durable lightweight instant voice translator you can start a world of conversations. Using this pocket translator is also fairly simple, as all you have to do is start it up and you’ll be ready to communicate freely in over 120 countries.

That ultimately makes the Pocketalk Classic Translator great for frequent travelers and business workers that often have the need to communicate with people who speak/communicate in different languages.

Let’s take a more detailed look at the Pocketalk Classic Translator and check all of its specs and features.

First of all, the Pocketalk Classic Translator is an extremely portable device, and it is all thanks to its super small size. This small and lightweight pocket translator measures 4.3 inches long by 2.4 inches wide by 0.6 inches tall when sitting/resting horizontally on a flat surface, weighing just around 3.5 oz.

Other than its sleek design, this compact pocket translator also features a strap hole (located at the bottom of its back side) that offers full compatibly with the company’s Lanyard accessory (doesn’t come included in the translator’s package).

The Pocketalk Lanyard was specifically designed for both the company’s upcoming Pocketalk Voice Translator (its higher-end translator model, which customers can already pre-order, coming equipped with a Text-to-Translate Camera) and its already available Pocketalk Classic Translator.

Furthermore, the Pocketalk Classic Translator features a 320×240 pixels display screen – which also works as a touch panel – that allows users to easily visualize how to spell a sentence in another language, while also listing both languages (original language and “target translated language”) at the bottom of the screen.

Additionally, the translator also comes equipped with two built-in speakers (located at its very top) that operate at 1.5 Watts, as well as a built-in dual-microphone setup with Noise Cancellation that allows to device to easily identify what languages users are currently speaking in.

Not only that, but after detecting two different voices, the translator’s display screen will also differentiate those same voices in a flawless manner, as it will then highlight each person’s speech in a different color (main user as White and secondary person as Blue). 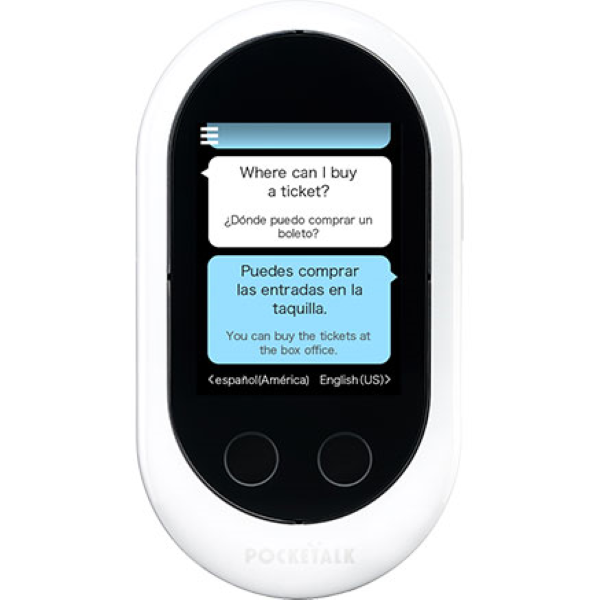 Furthermore, the translator runs on a custom OS (Operating System) that’s based on Android OS 8.1 and the device features 1GB of RAM memory and a total of 8GB of ROM memory.

Lastly, this amazing pocket translator can work flawlessly thanks to its built-on processor, which is a 1.3GHz Quad-Core ARM Cortex 53 processor.

The Pocketalk Classic Translator features both Bluetooth 4.0 connectivity and Wi-Fi connectivity, supporting the most common Wireless Standards (802.11a/b/n/g) while operating at a frequency band of 2.4GHz/5GHz.

Additionally, and as mentioned before, the translator also comes with built-in mobile data – 3G (W-CDMA) / 4G (FDD-LTE) – which allows users to use it wherever and whenever they need it.

As mentioned at the beginning of the article, this already included global unlimited cellular data will work for a total of 2 years with no monthly fees whatsoever.

Not only that, but the translator also features a SIM Card Slot for nano-SIM cards, but it is important to note that that same SIM Slot can only be used with Sourcenext SIM cards.

As this is a portable language voice translator, the Pocketalk Classic Translator also comes equipped with a built-in rechargeable 2200 mAh Lithium Ion Battery that can offer around 240 hours of battery life on Stand-By mode when used within 4G LTE areas, as well as around 7 hours of battery life if used without any breaks.

Recharging the device is quite simple and really easy, as all you have to do is connect its included USB-C Charging Cable to the translator’s USB-C Battery Charging Port (located at the very bottom of the device).

Recharging the translator back to a full charge should take you around 135 minutes.

During recharging times, both the device and its included USB-C Charging Cable will support up to 5V of Charge Voltage and feature a Charge Electrical Current that can go between 0.5A～2.4A.

Inside each package users will find: their Pocketalk Classic Translator, an included USB-C Charging Cable (Type-C to Type-A) and the user User Manual.

As mentioned before, the Pocketalk Classic Translator works in a total of 74 different languages, and as such, it ultimately allows users to be ready to communicate with almost anyone in the world, giving them the freedom to explore over 120 countries without any fear of communicating with native speakers.

Lastly, the company also has the translator supporting full-time free software updates – which are frequent, mind you – and as such, the translator can only get better since the moment you buy it.

Each update can include bug fixes, new language additions and more.

The Pocketalk Classic Translator is a portable, lightweight and easy-to-use pocket translator that works in 74 different languages, featuring an astonishing 7 hours of battery life (240 hours when on standby).

With it, you can explore over 120 different countries without ever having to struggle with language barriers, as you can always use this handy pocket translator whenever and wherever you need it.

This makes it ideal for traveling, business conversations, and more, making it the perfect tool for anyone that’s passionate about exploring the many different countries around the world as well as for business workers that spend most of their time broad while having the need to communicate in many different languages.

To be completely honest, the utility of a device like the Pocketalk Classic goes above and beyond, and with it, you can easily unlock a new world of conversations.

If you’re interested in buying it, each unit is currently going for $200. Furthermore, for just $20 extra you can get its super convenient Pocketalk Lanyard accessory, which allows you to easily carrying the translator attached to your belt’s straps, backpack or anything else you can think of.

You can get order your Classic Translator right now, directly from Pocketalk’s official shopping page, which you can access via this link.