Any dog owner should know that allowing their dogs to exercise will ultimately keep them healthy and limber, while also reducing any behavioral problems such as excessive licking, barking, chewing, digging, and any other anxiety related behaviors. Furthermore, letting their dogs exercise also helps them to build trust and confidence in their owners as well as in their own environment (the space they most commonly frequent on a daily basis). To have your beloved four-legged friend(s) exercise on a daily basis, one idea would be to get some sort of doggie exercise equipment that’s specifically designed for dogs; something like the SwiftPaws Home for example.

The SwiftPaws Home is basically a safe-to-use lure coursing machine kit for dogs that’s designed to be set up at your home’s backyard and used at a daily basis (or at least at a weekly basis), ultimately working as a “Capture the Flag” toy/game for your dog(s) to exercise with while chasing the system’s moving flag.

A little about the Sport of Lure Coursing:

“Lure coursing is a competitive sport where dogs of all breeds can participate to earn titles. With the American Sighthound Field Association (ASFA), competition is limited to a list of specific sighthound breeds. The AKC and UKC also offer competitive lure coursing for sighthounds, as well as “ability” and “straight dash” style coursing that is open to all breeds. In fact, SwiftPaws lure coursing equipment ran the very first AKC sanctioned FAST CAT event in Florida. Many clubs and facilities use SwiftPaws for their product needs.

Back to the SwiftPaws Home kit. This doggy gadget works like a super interactive pet toy that allows your furry friend(s) to exercise a bit every single day by playing a quick game of “Capture the Flag”. That ultimately allows dogs to stay fit and healthy to ensure that they have a longer, happier and healthier life.

Not only that, but SwiftPaws‘s lure coursing machine for at-home use also challenges pups with Frenetic Random Activity Periods (FRAPs) (commonly known as Zoomies) to burn most of their extra energy.

FRAPs (or Zoomies) basically refers to those unmistakable explosions of energy that dogs have on occasion, featuring a frantic and repetitive behavior such as running in circles, chasing their own tail or even just spinning around.

No matter what your dog’s size is, Fido is simply guaranteed to love this exciting game of chase as soon as you get it ready to work! And the same goes for any dog owner out there that just loves to see their energetic dogs running and playing as happy as they’ve ever been.

Let’s take a more detailed look at the SwiftPaws Home lure coursing machine for dogs and check its design, specs and just about everything it has to offer to both dog owners and their dogs.

As mentioned before, the SwiftPaws Home is a safe-to-use lure coursing machine for dogs that was designed to be set up at your home’s backyard and used on a daily – or at least weekly – basis, working as a “Capture the Flag” toy for your dog(s) to exercise with while chasing its moving flag.

With it, dog owners can bring the best game of chase ever right into their home’s backyard.

The SwiftPaws Home Unit (meaning the main device itself) is actually super durable, as it is made with ultra-durable materials that ultimately ensure that entire system has the longest life span possible.

Furthermore, while the unit might be almost as big as most dogs of smaller dog breeds (like French Bulldogs, Dachshunds, Yorkshire Terriers, Chihuahuas, Brussels Griffons, Pomeranians, Affenpinschers, Russian Toys, Toy Fox Terriers, Japanese Chins, etc.), the system is still perfectly safe to use for dogs of any size.

Literally, any size, as dogs are basically chasing and trying to catch the kit’s included flag, while the main unit itself (which is battery powered) basically works together with the system’s 3 pulleys without ever moving from where it stands to move the flag around.

This lure coursing machine courses up to 300 ft. and can have its system’s “pulling” speed increased to a max of 30 mph.

The system’s flags (or lures), are simple, yet somewhat durable plastic flags that are basically made like plastic bags. While this complete kit comes with a set of twenty (x20) reusable glas, dog owners can also easily make their own replacement flags with any fabric, strips of faux fur, or even feathers.

The SwiftPaws Home lure coursing machine for dogs can be fully set up/installed in just a matter of minutes – around 10 ~ 20 minutes, depending on how widely you want to set up the system as well as if you have someone helping you or not – and in a very easy fashion within any backyard – meaning that even smaller backyards will allow the system to work great.

As this is a super complete lure coursing machine home-kit for dogs, each package comes with everything you need to run it properly straight out of the box, as well as with no concerns whatsoever. 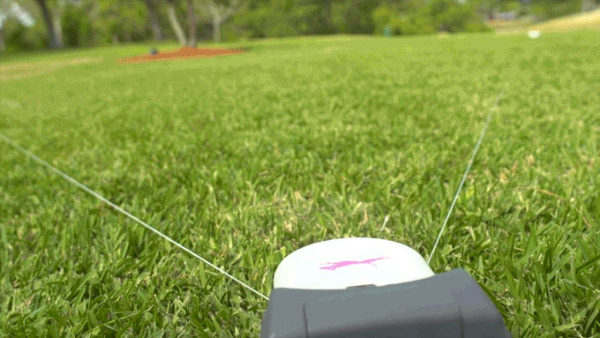 As soon as the system is set up, dog owners can sit back and enjoy while their furry friends burn some extra energy and calories in a healthy exercising way with a quick two-minute game of “Capture the Flag”.

Not only will you be having loads of fun while watching your dog(s) chasing the system’s flag with a happy smile on their faces, but you’ll also be providing your dog(s) with both healthy physical and mental exercise for days, weeks, months, and even years and years to come.

Playing an exciting game of “Capture the Flag” with the SwiftPaws Home lure coursing machine is both simple and easy. 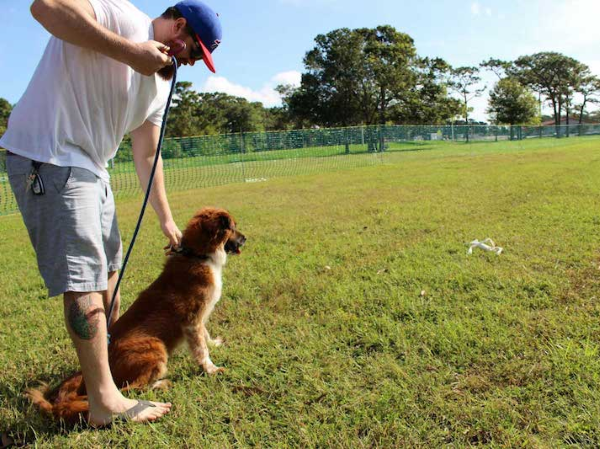 While you’re dog happily chases the system’s flag, you can easily and fully control the action by using the system’s included remote control, which not only allows you to start, stop, and re-start the system’s pulleys and have those pulling the flag, but also control the pulleys’ “pulling” speed in a very convenient manner.

The main unit’s included attachable rechargeable battery can provide for tons of hours of battery life.

Furthermore, recharging the main unit’s battery back to full power is also super easy and it should only take a couple of hours.

All you have to do is remove the battery from the main unit, connect it to the included charger and that’s pretty much it.

To be completely honest, this lure coursing machine system for dogs actually comes packed in a very neat way, which just shows the company’s extra care for their product.

Every part of the system comes separated to avoid any damage between each and all of its parts, but also conveniently placed in a great and very correct order, ultimately making the system’s installation a breeze.

Inside each package, users will find: the SwiftPaws Home main unit, the main unit’s included remote controller, a total of three (x3) pulleys, one (x1) roll of line that goes up to a max of 250 ft., some stakes and tethers, a line winder, a roll of twenty (x20) flags, the system’s included attachable rechargeable battery and charger, and a Charging Cable for the system’s remote controller.

The SwiftPaws Home is a safe-to-use lure coursing machine home-kit for dogs that’s designed to be set up at your home’s backyard and used at a regular basis so that Fido can stay healthy and fit.

While the system conveniently provides energetic dogs with both healthy physical and mental exercise, this lure coursing machine for at-home use is also great for any pups with Frenetic Random Activity Periods (FRAPs) (or Zoomies) that need a way of burning some of their extra energy. 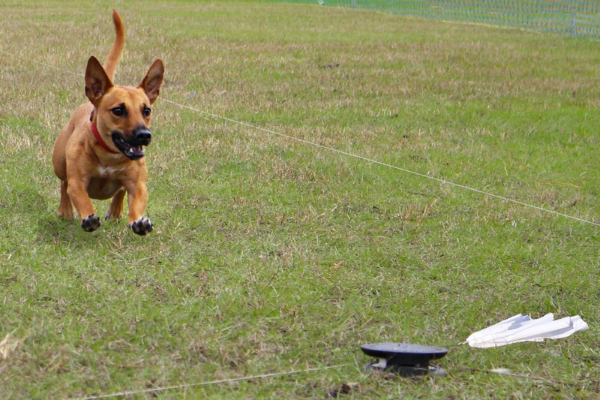 If you’re interested in buying it, you can check out their current offers directly on the SwiftPaws website. You can order yours online right now here.

The PupPod Rocker with Feeder is a 2-piece App-enabled enrichment puzzle toy system for dogs that provides dog owners with a powerful tool to encourage their dogs to stay active and healthy.
Read more
Pet Gadgets

SwiftPaws In-Stock for the Holidays for the First Time Ever

The SwiftPaws Home is a safe-to-use lure coursing machine home-kit for dogs that’s designed to be set up at your home’s backyard and used at a regular basis so that Fido can stay healthy and fit.
Read more
Pet Gadgets

The Modus M-230 is a handheld ultrasonic Dog Bark Control and Behavior Training Device that allows dog owners to train their dogs to be able to control their barking, clawing, and chewing urges in a gentle and non-intrusive manner. With it, dog owners can easily have a convenient, non-intrusive, consistent, and effective way of teaching their dogs to stay away from any type of unwanted behavior like loud and unwanted barking, as well as aggressive clawing and chewing.
Read more
Pet Gadgets