Whether you’re looking to endure/withstand the rugged terrain and decreasing oxygen content on higher altitudes while you’re out exploring the outdoors, to improve your workout performance , or to ultimately break sports records, any of those three things can only be achieved by focusing on one specific approach, and that’s obviously having a proper breathing technique. Having a proper breathing technique can help you to never run out of air, and that goes for any outdoors adventure, any fitness and/or sports activity, or even for any sports competition. It’s for situations and challenges like these where having something like the Airofit Respiratory Trainer can help you and your lungs to be fully prepared, and obviously, to ultimately beat the competition.

The Airofit Respiratory Trainer is basically a breathing technique training device that’s part of the Airofit System, which also incorporates a Virtual Breathing Coach in the unit’s interactive Smartphone Companion App (the Airofit App – discussed at the end of the article).

As such, the by using the Airofit Respiratory Trainer, the Airofit System can help anyone (and I literally mean anyone), no matter if they’re beginners, intermediates, or expert athletes to train their breathing technique for pretty much any sports that you can think of, and that even goes for professional athletes.

Let’s have a more detailed look at both the Airofit Respiratory Trainer and its Smartphone Companion App and see exactly how the Airofit System works and check what benefits it can offer to any fitness enthusiast and/or sports athlete.

As mentioned before, the Airofit Respiratory Trainer is a state-of-the-art breathing training system and performance enhancing device that can provide adjustable resistance to your respiratory muscles.

The Airofit E-unit (Airofit Respiratory Trainer) itself contains both pressure sensors (which is what allows the unit to measure a user’s breathing technique) and a Bluetooth transmitter (which is how the E-unit sends your breathing data to the mobile App, thus allowing the Airofit System to accurately measure your breathing patterns and display them on your Smartphone via the Airofit App).

The Airofit E-unit is a pocket-sized gadget that’s composed of the main device (the electronic-unit itself) and a detachable mouthpiece (which can be easily removed to be conveniently washed after each use).

Depending on the selected training program, duration and intensity, you will be able to select the most appropriate resistance level for your current breathing technique and breathing muscles (which basically include your diaphragm, rib cage muscles and chest muscles, and lungs).

THE SCIENCE BEHIND THE AIROFIT RESPIRATORY TRAINER

The performance effect was measured in a standard Cooper running test before and after a two-month trial. The study sample consisted of a total of 68 people, which were divided into 3 groups, all of which spent 8 weeks training with different resistance levels. 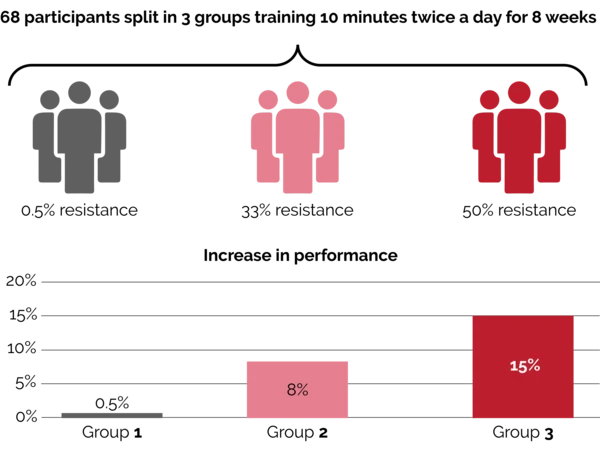 This study helped to ultimately prove that the higher the training intensity set while using Airofit, the stronger the user’s respiratory muscles become, thereby enabling a higher sports performance as an end result.

So, if you’re asking yourself what would the main benefits be of using a device like the Airofit Respiratory Trainer, then we also got the answer for that. 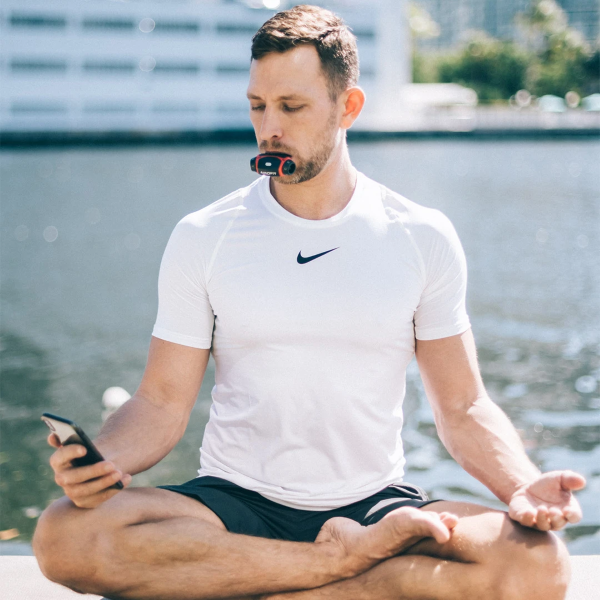 For Cycling and other Cardio-Based Activities

For any sports/fitness activity that relies mainly on cardio – such as cycling for example – the Airofit Respiratory Trainer can help its users improve their respiratory strength. 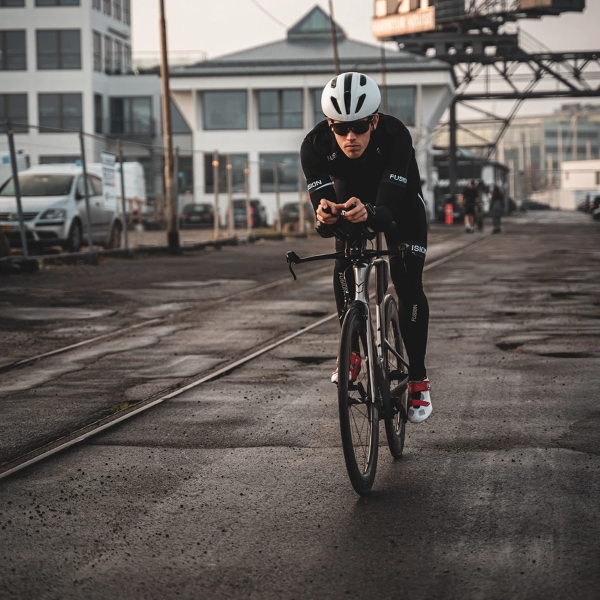 That’s because stronger breathing muscles allow athletes of all levels to improve their performance in high intensity, as well as in endurance sports.

As such, focusing on your breathing muscles (but mainly the diaphragm) helps athletes to prolong the time until they reach fatigue, which consequently prolongs oxygen supply to the muscles used during each exercise, whether that’s cycling or any other cardio-based sports like Athletics (competitive running, jumping, throwing, and walking).

For Swimming and any other Intense-Breathing Activities

For any sports/fitness activity that relies mainly on an athlete’s Vital Capacity – such as Swimming or even any Fighting Sports (MMA, UFC, etc.) – which is the actual amount of air you can get in and out of your lungs, the Airofit Respiratory Trainer can also help its users to improve their Vital Capacity. 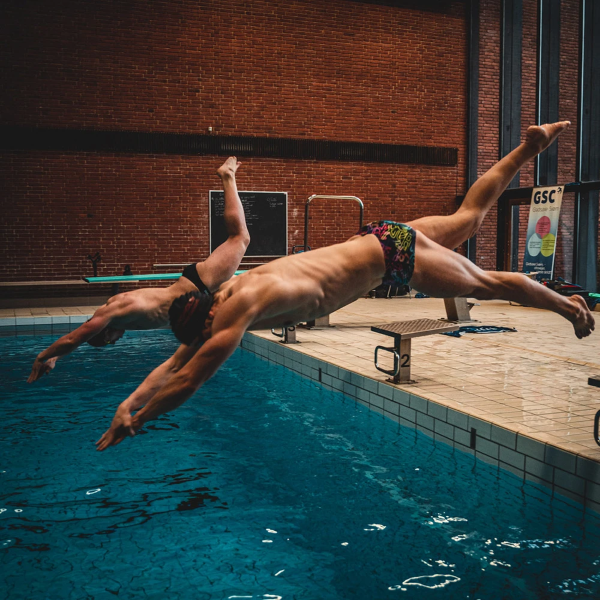 That’s done by having the device helping its users focusing on further stretching their diaphragm and intercostal muscles, which allows users to decrease the residual volume and increase the amount of usable air.

This, of course, is interesting for athletes, but could also specifically help patients with asthma or COPD to have a better time breathing on heavy-duty situations like any workout or while carrying heavy objects around, climbing long sets of staircases, etc. Pretty much any intense-breathing activity.

For Endurance Sports or anyone looking to improve their Breathing Performance

For anyone that’s looking to improve their Breathing Performance during each and every workout session, or for any specific competitive sports, having a Boosted Anaerobic Threshold (AT) – exertion level between aerobic and anaerobic training OR the point during exercise when your body must switch from aerobic to anaerobic metabolism – can ultimately help athletes to pretty much outperform better than the entire competition. 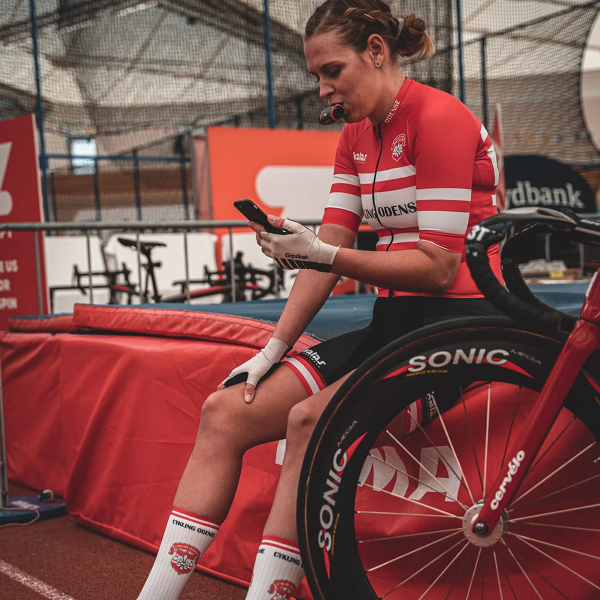 Ultimately, the importance of having a Boosted Anaerobic Threshold allows athletes to workout and perform harder, as their muscles require more energy than what can be produced using oxygen.

That’s because our bodies cannot supply enough oxygen for such high performance, and so, getting your muscles used to an “oxygenless” environment ultimately ensures that athletes can have a prolonged ability to perform at high intensities for longer periods of time.

Users can then analyze that same data and change their breathing resistance settings on the E-unit to ultimately train their Respiratory Strength, Vital Lung Capacity, Anaerobic Threshold, Instant Performance and Breathing Muscles Relaxation / Body Relaxation (this last would be applied for right after an intense workout sessions).

Moving on to the Airofit App itself, which is available to download for free for both iOS and Android devices, the Smartphone Companion App basically works as the Airofit System’s Virtual Breathing Coach, as it will give you real-time guidance and feedback, and track your progression in various tested exercises and training programs.

The App is actually quite reliable to practice and improve your breathing technique, and just like the test group from the scientific study, in just a mere 8 weeks after you use the Airofit Respiratory Trainer you’ll pretty much start noticing a huge difference on your breathing patterns.

All of the App’s training programs are simply amazing, as they’ll seamlessly guide you into becoming the very best version of your Breathing-self, literally!

The Airofit Respiratory Trainer is a breathing technique training device equipped with built-in pressure sensors and Bluetooth transmitter that sends information to a mobile App which works as a Virtual Breathing Coach to help both fitness enthusiasts and professional athletes to improve their breathing technique and overall performance.

If you’re interested in buying it, each unit is currently going discounted from its normal price of $299, now going for $274 each (saves you $25). You can get yours right now, directly from Airofit’s official shopping page, which you can access by clicking this link.

The MedRock HOTROCK is an electric-powered heated foam roller that can be heated up to 175°F (79.44°C) in less than 4 minutes and maintain its temperature.
Read more
Health Gadgets

The EnviroKlenz Mobile UV Model is a mobile air purifier system that combines a high-end HEPA Filter with two germicidal UVC Lamps and an advanced chemistry technology to capture and destroy any fine airborne particles in the air. While its Medical-Grade HEPA Filter can accurately filter, capture and remove up to 99.97% of sub-micron particles from the air that are as small as up to 0.3 microns with a 99.99% efficiency, the system's built-in UVC lamps work in combination with its HEPA Filter by continuously shining a powerful ultraviolet germicidal radiation (UVC Light) on any of the airborne organisms that are collected by its HEPA Filter to effectively kill and destroy those same captured airborne particles. At the same time, the system's patented Earth Mineral Technology works to attack any surrounding VOC (Volatile Organic Compounds) that are present in the air, which then allows the system to break those down to a compound level. This is the main feature that sets this air purifier away from its competition, as it is a brand-new functionality that is not seen in any other air purifier models from other brands.
Read more
Health Gadgets

The Omniball Rolling Workout Ball is an OmniDirectional fitness device that's equipped with integrated Velcro straps, which ultimately allow you to use it as a dedicated set of gripless weights for either your hands or feet.
Read more
Health Gadgets

The Big Fig Mattress + Foundation is a premium hybrid mattress that's ultra-comfortable and extremely soft, while still being bouncy, supportive, and strong. It's the perfect mattress for any person with a bigger body frame, as this 2-piece setup of unique hybrid mattress and specially designed foundation can provide heavier people with around 50% more body-weight support than any other average premium innerspring mattresses that are currently available on the market, as well as support up to 5 times the weight of any typical mattress foundations that are currently available on the market (this goes specifically for the mattress' specially designed foundation).
Read more